If you follow the IFSC World Cups, even in the most minimal capacity, you’ll have come across Eddie Fowke’s images. Any online write up, athlete Instagram post or advertising media surrounding the World Cups will likely be accompanied by live action shots, podium lineups and behind-the-scenes details captured by Fowke.

For the last six years, for nine months of the year, Fowke—operating under his company name, The Circuit Climbing—has followed the complete World Cup circuit around the globe, capturing the action, building relationships with athletes and organizers, and providing the climbing community with a means of experiencing the excitement and athleticism involved in these events.

“There are sacrifices I’m willing to make to document our sport,” writes Fowke on his GoFundMe page. “That’s the nature of the game. It’s worth it to give climbers and climbing fans content that will keep them psyched, keep their passion stoked. And knowing that these climbers will have all the photos to reflect on their time in the sport once they move on is important to me.”

This year, however, Fowke requires financial assistance to keep The Circuit, which has been largely self-funded to date, operating, and has set up a GoFundMe page: Keep The Circuit Running.

“It was an incredibly tough choice to go to a crowd funding platform, it’s really disappointing to me personally and feels like a failure,” Fowke told Rock and Ice. “But with no funds left from 2017 and 2018 contracts still pending it became a necessity. Especially with so many flyaway [World Cup] rounds early in 2018.”

Fowke, an enthusiastic photographer, was living a corporate life in Sydney, Australia, until 2013 when he quite his job in telecommunications and, driven by a life-long love of climbing, set up The Circuit.

“Having been a competition climber myself in the 90s and early 2000s, I was immediately drawn to shooting competitions,” says Fowke. “I love watching the movement and skill of the best climbers, and knowing that if I miss the shot it’s gone. There’s no way to pose them, to wait for perfect light, anything like that, it’s all anticipating the action and getting where I need to be to nail the shot.”

At first The Circuit was primarily self-funded, with Fowke using his savings to keep himself on the road.

“The goal was to be making enough through photo sales to be turning a profit after three years,” says Fowke. “I treated it like going to university. For three years I invested in my climbing photography education hoping to come out the other side making a living. And now, entering my sixth year of World Cup shooting you could say it’s almost worked, or intermittently worked… Some seasons are gravy, others, like this one, can be pretty tough.” 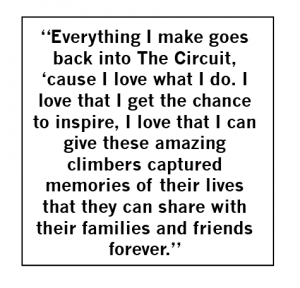 Although Fowke is provided a travel stipend by the IFSC to attend World Cup events and has some financial support from FiveTen and Mad Rock—whom Fowke is quick to acknowledge and thank—he has found that image distribution, fueled in part by the immediate and “throwaway” nature of social media, have left him out of pocket when it comes to being financially compensated for his images.

“I believe in letting athletes use my images,” says Fowke, “it’s my thank you to them for letting me have such privileged access to their world. […] Companies, on the other hand, I firmly believe should be paying for image use.”

So far the Keep The Circuit Running GoFundMe campaign has reached about 16% of it’s total.

“I’m incredibly grateful to those who have contributed,” says Fowke. “The total may look high, but it’s in Australian dollars, and so you can round down by approximately a third to see what it is in USD.”

The 2018 World Cup circuit kicks off this month with the first bouldering World Cup event in Meiringen, Switzerland. To keep Eddie capturing the action at this event and all the others, check out the Keep The Circuit Running GoFundMe Page here.

To see more of Eddie Fowke’s work, check out some of these recent past World Cup reports