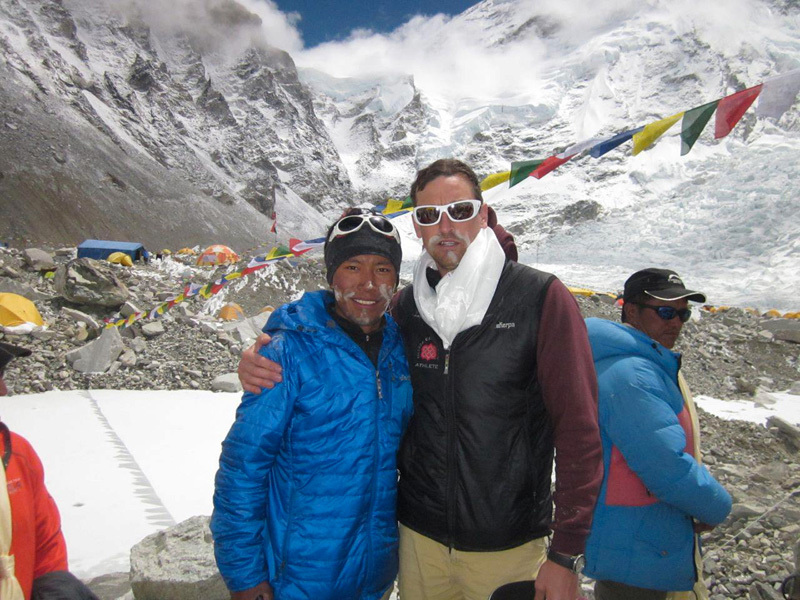 British mountaineer Kenton Cool and his longtime climbing partner Dorje Gylgen Sherpa enchained the three peaks of Nuptse (7,861m), Everest (8,848m) and Lhotse (8,516m) in just three days. This is the first time all three mountains have been climbed in succession.

The climbers set out on May 11 to climb Nuptse–the smallest of the three peaks–first. However, a strong wind-storm forced Cool and Gylgen Sherpa to abandon the climb after sitting in their tent and weathering the storm. “I spent most of the night of the 11th May trying desperately to stop the tent being torn off the side of the Lhotse face,” Cool told the BMC. The team retreated to basecamp and waited for another weather window to open up.

On May 18, at 6 a.m. Cool announced that they had successfully reached the top of Nuptse–which is the least summited peak of the three mountains–and that they would attempt to climb Everest next. After making it back to the South Col (8,000m) and reportedly seeing a large number of climbers also awaiting to attempt Everest, Cool and Gylgen Sherpa decided to leave extra early for the summit. Both climbers reached the top of Everest at 2 a.m. where they shared the summit with nobody but themselves. Cool was quoted by the BMC: “Disappointment of being early and not seeing sun rise made good with privilege of sitting alone in absolute silence with my friend … our small headtorches beaming into nothing.”

After descending Everest, Cool and Gylgen Sherpa began the last summit bid of their enchainment on May 20. Setting out at 4 a.m. the climbers reached the top of Lhotse–their second 8,000 meter peak–during the middle of the night. Reportedly finding the descent difficult, the climbers have reached Camp 2, where they will recover from climbing the Khumbu Triple Crown in a historic three days.