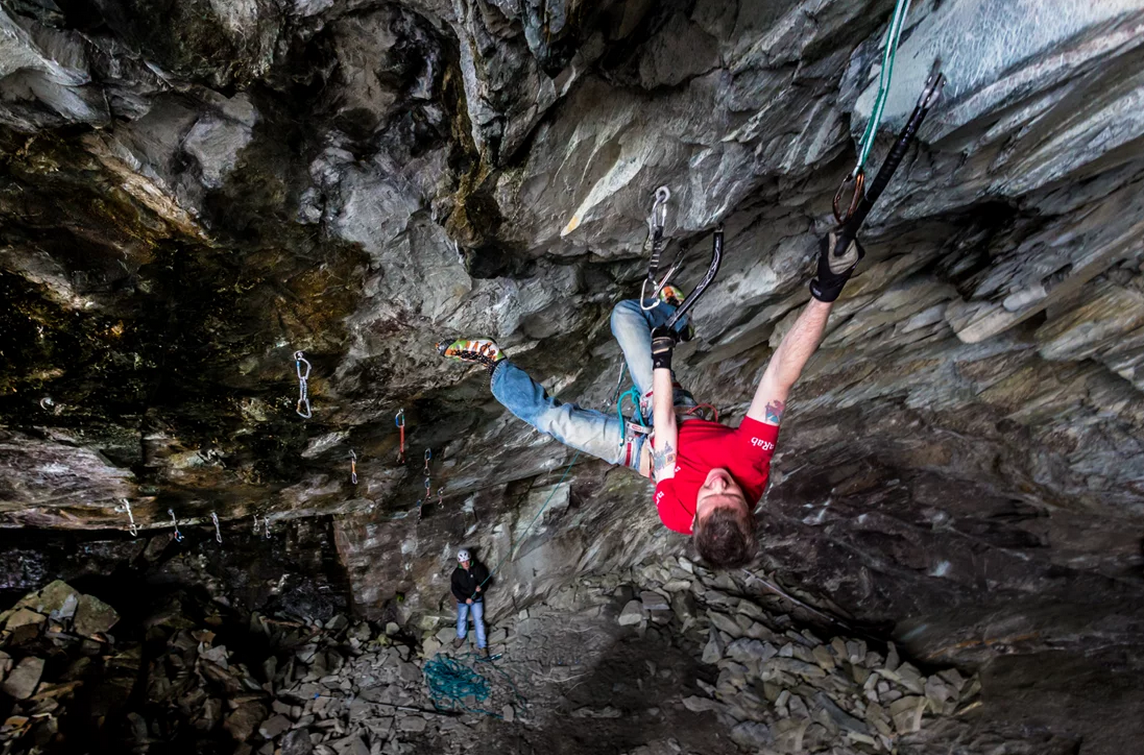 Kev Shields solos E7 and hard dry tooling lines. He has only one good hand. And suffers from epilepsy. Here, he discusses his demons and how solo climbing elevated him from the abyss of depression.

I’ve been trying to write this for ages but find it difficult revisiting the abyss. I’ve been deep into it before, so deep in fact I tried not to return. Somehow though I clawed back, it hasn’t been a simple triumph. Every now and then that demon comes to try tempt me away again and it’s nearly won but I won’t let myself be that weak again. These days I fight, I can only liken the battle to being adrift in a dark stormy ocean, swimming against a tide, easy to let myself slip below the waves and disappear, easy to give up and welcome the end of the battle but that seemingly is not in my DNA.

The demons aren’t a recent thing, they’ve always been with me, I can still recall nightmares from when I was a child in all their horrific and terrifying detail, apparently all part of the build up to me becoming epileptic later in life. Not only born with a badly wired brain I was also literally dealt a shit hand physically being born with a deformed hand. Regardless of how much I tried to be normal I’ve always been made to feel different, its just the way the world is. From the bullying at school by students and teachers alike to rejection from the Army and the look of revulsion I’ve seen in certain girls faces when they look at my hand, in fact only in the company of two girls have I ever felt its not an issue and my selfish commitment to climbing cost me my closeness with one of them and probably part of my sanity for a while.

The benefit of all this is it prepared me for climbing dangerous routes. I’ll be honest in saying that for the ten years between 2002 and 2012 when I really pushed my soloing I never gave a shit whether I lived, part of me praying for a release from the crushing loneliness that comes from feeling different to everyone I knew. The rest of my life was either drinking heavily or involved in things I cannot discuss. In 2007 I reached the deepest part of the abyss, a darkness I could not begin to explain and one I wouldn’t wish on anyone, I asked for help, they told me I was beyond help, being thrown into that dark ocean alone was the tipping point and also the best thing they did to help me. I knew I could only rely on myself and began to view climbing as therapy and not as a way out.

In 2009 after two folk attempted to put my skull in with a brick and during the ensuing manhunt we went on I decided enough was enough and I moved North. If climbing was my therapy then soloing was the specific medication and I overdosed on it, I pushed myself hard to exorcise as many demons as possible and it worked, the loneliness of being unchangeably different is the only one that remained. In 2012 it seemed to settle and in an instant I stopped soloing and a weight was lifted. I began to see the demon differently now, instead of something monstrous and negative I saw it as a thing I could draw energy from instead of losing it to. I began to tap into it at the base of scary routes, all the good that had been taken from me by it in the past began to return route by route, the hunter now becoming the prey. I took the darkness and used it to create light, every route becoming a victory, I turned the demon in on itself and now I mostly have control over it other than when my epilepsy acts up. These days the demon is my bitch, something I only use when I need it.

Last week I began soloing again, I guess I always knew I would but only if it felt right. I don’t know why it felt time to return to it, I used to think that my fear of the loneliness of my everyday life was offset by being alone up there but to be truly honest climbing has been a hiding place for me. Here I get to hide behind a mask of ruthless commitment and apparent boldness to give me an excuse for the loneliness. I accept now that this demon will continue to hunt and for the time being I’ll continue to run to the mountains and the horrific beauty of the solace only they can offer.

I AM. KEV SHIELDS

I AM. KEV SHIELDS from Nadir Khan on Vimeo.

For more stories on climbing and mental health, visit climbout.co.uk