A friend once quoted Ben Moon as saying that having kids is like being injured. Parenthood and injury are indeed analogous—all it takes is a second … and soul-crushing regret potentially awaits. Moreover, the consequences are direct: getting out of rhythm, losing strength, feeling like Chronos is playing a cruel joke. But does it have to be this way? As a climber with kids, I’m beginning to think (hope) No.

For all of the #yolo images spewing across my Insta feed, seldom do they include bedraggled parents telling their kids to stop eating dirt below their perma-drawed project or the risks associated with “just a few more gos,” i.e., a pissed-off wife or husband or other when you get home at 8 p.m. totally spent, but had promised 5:30 with a pizza for the fam.

Beyond the confines of a certain chossy limestone canyon on the Western slope, the guidebooks call it Rifle, where kids swarm like barbarian hordes on warm weekend afternoons, I saw a couple in Joe’s Valley a few weeks ago bouldering with a seven-month-old, in their Pack n’ Play, happy as a pig in mud, with daytime temps in the 50s. It was chilly. And they were climbing hard. A hundred parent points to them. The next day, I saw more kids.

Parenting and pulling hard isn’t a story we read about often, despite some of the best climbers of a generation going forth and multiplying. The lack of such stories may be the “no one here gets out alive” mythology that other parents are keen to propagate—just give up, you know, grow up, those lines, like Artax calling it quits in the Swamps of Sadness. And people do give up. They do. But no, everywhere climber-parents are resisting! #MCWKGA—Make Climbing with Kids Great Again!

Here we are: Chris Sharma, kid in tow, sending mid 5.15; Tommy Caldwell packaging little Fitz with him down to Patagonia, and sending; Jacinda Hunter, mother of four, holding a full-time job and sending 5.14b. Now there’s a sandbag. The list does go on. Not indefinitely, however.

We rarely read the behind-the-scenes of parenting and pulling … until now. Attempting to send the last climb on what he calls his Rocky Mountain Trilogy, Blue Jeans Direct, a 700-foot, eight-pitch, 5.14a, Sonnie Trotter writes, “With a newborn baby and a three-year old toddler, there was no more time for messing around. I bought some time when my wife’s sisters visited for a week to help and spend time with their adorable niece and nephew. I had to act fast.” Yep, that’s life. Trotter’s story (“Three Big Fish,” p. 38) of getting after big, hard alpine walls with the caveat of “I’ll be home for dinner” is a lesson to us all. 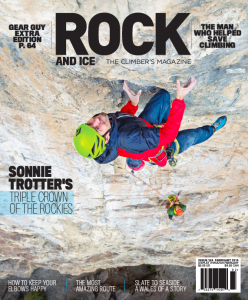 Enter Armando Menocal, an unwitting hero for climber parents. When you thread the anchors on a slabby 5.6 for your kid, or give your sport project a burn at a warm crag with your offspring scrambling about, thank Menocal, co-founder and early leader of the Access Fund. What is it you’re thanking him for? Bolts—and access to said cliff.

Bolts almost were not, and in the 1980s Menocal, with the help of a select few, protected our right to put steel into the rock for convenience, protection and anchors. Menocal’s story, nuanced and ever-so important to the history of climbing, is told here in “The Saver,” p. 20.