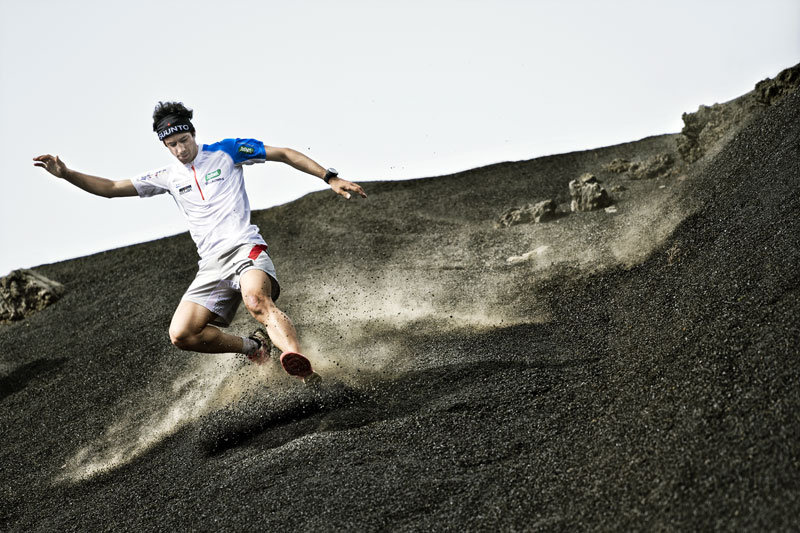 Two world-class ultra runners, Kilian Jornet and Emelie Forsberg, were rescued from the north face of the Aiguille du Midi above Chamonix, France, on the evening of Saturday, September 7. Forsberg and Jornet were attempting the Frendo Spur, a 1,200-meter (3,937 foot) alpine, mixed route in the Mont Blanc massif. Jornet, who has recently made headlines with world records for ascent/descents of Mont Blanc and the Matterhorn, had previously climbed the Frendo Spur. He writes on his blog: “I was making a run to the north face of the Aiguille du Midi, the Frendo Spur route, one that I had previously done very light. It was a good time to leave before the bad weather and we had climbing equipment (ice and rock) necessary.” However, Jornet adds: “I was short-sighted to think that there would be warmer temperatures and not to take more jackets.” According to Forsberg’s account, which she wrote about on her blog, the team climbed well for several hours until they reached the steep ice guarding the summit. Trying to avoid the ice, Jornet and Forsberg climbed off route into loose rock, where they reached a decisive moment. “We took time climbing up, rappelling down, trying to find another way and so on we did for a while,” writes Forsberg. While attempting to find an alternate way to the summit, however, the weather window closed on the climbers. “I became so cold and I couldn’t focus my thought very well,” Forsberg writes. “We started to talk about possibilities.”

At 4:30 p.m., Jornet and Forsberg called the Peloton de Gendarmerie de Haute Montagne (PGHM) for a rescue. Unable to reach the climbers by helicopter due to the bad weather, the PGHM reached the climbers by accessing the route’s summit via cable car and then rappelled down to the stranded climbers. The PGHM then safely escorted Jornet and Forsberg to the summit. “One thing I wished is that they could have given us an estimated time of arrival,” writes Forsberg. “[Five] hours of staying in the cold or power up for making a safe rappelling. I don’t know what was the best.”

Jornet and Forsberg were attempting a “light and fast” ascent of the Frendo Spur, and according to reports by both runners, they were attempting the route using minimal gear, including running shoes with crampons. This has led to criticism by the alpine climbing community surrounding Chamonix. Jean-Louis Verdier, a guide and assistant in charge of security in the mountains of Chamonix, was quoted by ledauphine.com, saying: “[M]ountain practice must be undertaken with adequate equipment so that you can face bad weather. I’m angry when I see the continued rise of sneakers despite our requests [to use proper climbing gear].”

Jornet has done much to popularize this style of climbing, having blitzed world-record times on high peaks in the Alps by climbing with minimal gear and using his speed to capitalize on the brief weather windows of high mountains. However, while partnered with Forsberg on the Frendo Spur, this “light and fast” style of mountaineering proved inadequate. He writes via his blog, “This is a warning that the mountain is hard and even if you are careful, it is dangerous, and we must be humble in the face of it because this was our fault, especially when one is lighter.” Forsberg adds, however, that she was the “weakest in the rope team” and that without her, she believes that Jornet would have climbed to the summit or descended.

Despite being rescued because she had gotten cold, Forsberg maintains that the “light and fast” style of climbing is still what she prefers. She writes: “And to the question, why are you out on Frendo with only running shoes? I guess everyone needs to find his own way to approach things. This is how I want to do it. We make mistakes and learn from them. But this is still the way I love to be in the mountains. Light and fast.”