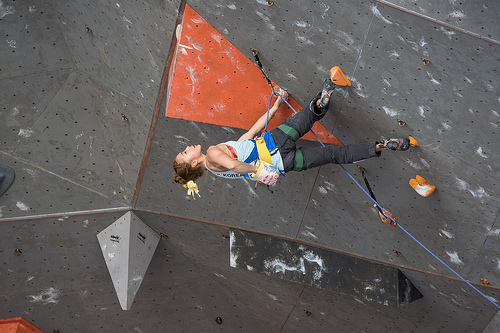 Jain Kim (Korea) and Domen Škofic (Slovenia) cranked their way to the podium this weekend in Puurs, Belgium, for the latest installment of the IFSC Lead World Cup series.

Škofic climbed with painstaking control, utilizing precise footwork and exceptional flexibility to minimize dynamic moves. Wind whipping his jersey, Škofic maintained his composure and clipped the final bolt— the only male competitor to top the final route. The victory was Škofic’s first gold of his World Cup career.

Jakob Schubert (Austria) and Ramon Julian Puigblanque (Spain) joined Škofic on the podium, in keeping with their medal performances early this season. Schubert’s powerful, dynamic style may have sapped his energy, forcing him to pause and shake often throughout sequences. He held on until a dyno to the last hold proved too difficult to control, landing him in second place. Puigblanque showed a strong performance, burning out just one move below Schubert for the third place finish.

The Women’s competition resulted in minor upsets all around, with Jain Kim breaking Mina Markovič’s (Slovenia) gold medal streak and earning her fifth consecutive gold in Puurs in five years.

Though Markovič’s robotic execution of complex moves took her to the top of the final route, she gave up the gold to Kim with a slightly lower semifinal finish. Belgium’s favorite Anak Verhoeven completed the podium, falling two moves below the last hold. Jessica Pilz (AUT) took fourth place— the first time this season that she finished without a medal.

Delaney Miller was the sole representative of the United States in Puurs, finishing the semifinal in 12th place.

American men were notably absent from Puurs, electing instead to participate in the Adidas Rock Stars bouldering competition that also took place over the weekend.