Alpinists David Lama and Dani Arnold have established a new route on the formidable Moose’s Tooth in Alaska. Their new route—Bird of Prey—takes a striking path through the previously unclimbed headwall on the Tooth’s east face.

“It’s a logical line,” Arnold told Rock and Ice. “We tried to climb the direct and easiest line to the top, but it was hard enough!”

Lama explains that this was both he and Arnold’s first trip to Alaska, and upon arrival they had no specific objective. “We basically flew in without an idea what we would go for,” says Lama. “The day we landed it was cloudy and the mountains were hidden, but the next morning we saw the east face of the Moose’s Tooth for the first time and felt pretty attracted to the unclimbed headwall.”

Lama and Arnold set up base-camp on the Buckskin glacier on April 10, and spent the next day scoping their potential route with binoculars, trying to pick a path that would connect the cracks and weaknesses of the east face. The pair decided on a line that begins on (VI WI6+ A2), which was established by Ben Gilmore and Kevin Mahoney in 2004 and subsequently starts on the visionary 1981 Jim Bridwell and Mugs Stump route Dance of the Woo-Li Masters (VI 5.9 WI4+ A4, 1520m). However, Lama and Arnold decided to try and branch off from Arctic Rage, forging a new line directly through the steep east face headwall.

The next day, they awoke at 2 a.m., brewed coffee, and skied to the base of the wall. “We soloed the first part of the face until about 100m [328 feet] higher than where our route leaves the line of Arctic Rage,” says Lama. “From there we climbed nine really demanding pitches to our bivy in the middle of the headwall.”

The pair spent a cold night bivied on the headwall and started climbing at first light the following day. Leaving all but their climbing gear and a backpack with food, water, and extra down-jackets at the bivy spot, Lama and Arnold committed to the deceiving upper-headwall. “The terrain was way more difficult than we expected,” says Lama, “but we made good progress climbing light.” The duo climbed 17 pitches and reached the summit at 6 p.m. Wasting no time, Lama and Arnold decided to rappel back to their bivy, descend the rest of the route and ski back to base camp in one push. They finally arrived at base-camp on April 14, at 2 a.m.

Lama suggests the grade of 6a [5.10a], M7+, 90-degrees, A2, for Bird of Prey>. As for the crux of the route, Arnold says, “There is not a particular hard pitch, but it’s very sustained and exposed! We needed all skills of alpine climbing. Ice, rock, mixed and aid-climbing.” 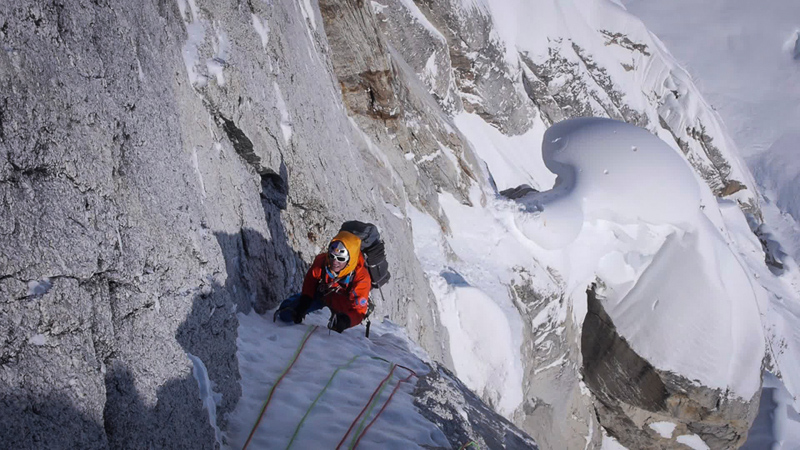