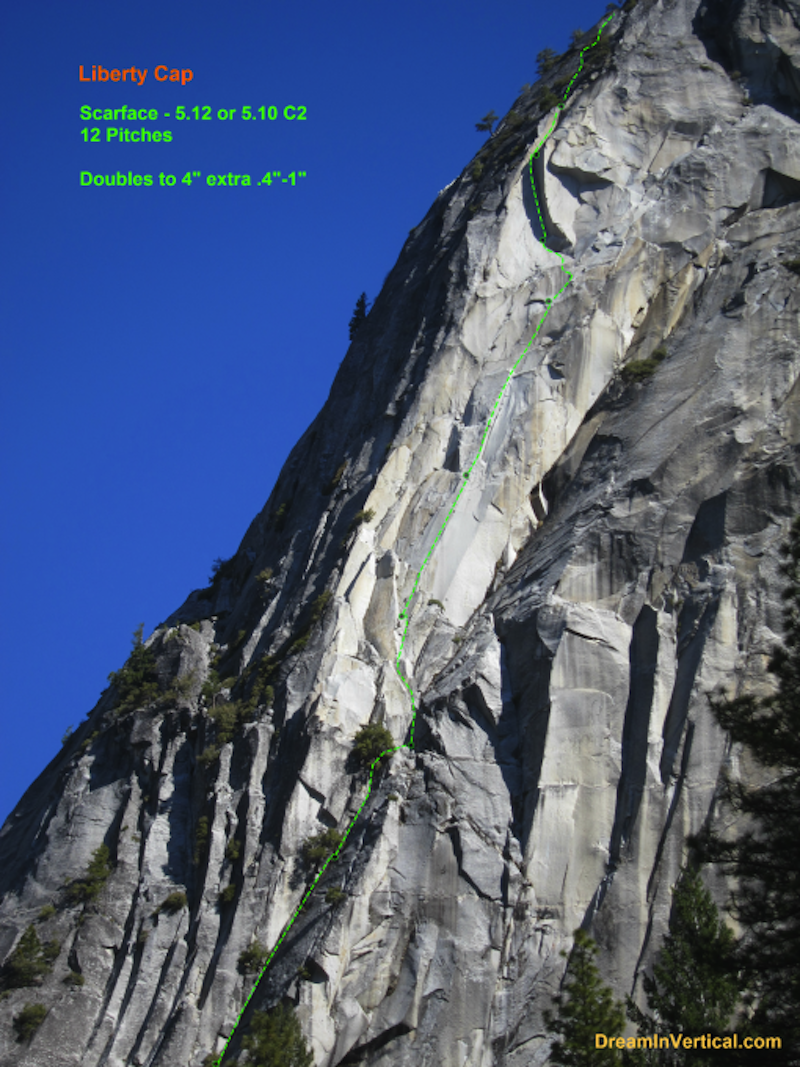 Tick off another 2013 FFA on one of Yosemite’s last free-climbed faces: Liberty Cap.

Last month, Luke Stefurak and Ben Steel completed a long-time project when they made the first free ascent of Scarface (5.12) on the southwest face of Liberty Cap, according to Stefurak’s blog Dream In Vertical. The route was originally climbed in 2010 by Josh Mucci and Steve Bosque and given the aid grading of 5.8 A3 before Stefurak and Steel freed it last month.

The free version of Scarface ascends approximately 1,500 feet over twelve pitches before topping out on Liberty Cap. Though most of the route features solid 5.10 and low 5.11 climbing, two 5.12 cruxes at pitches five and eight require thin fingerlocks and laybacking with little to no footholds. On the day of the first ascent, Ben Steel redpointed the first crux, a feat Stefurak had accomplished back in March, while Stefurak finally managed to stick the crux of the eighth pitch. They swapped leads throughout the rest of the lower graded pitches. 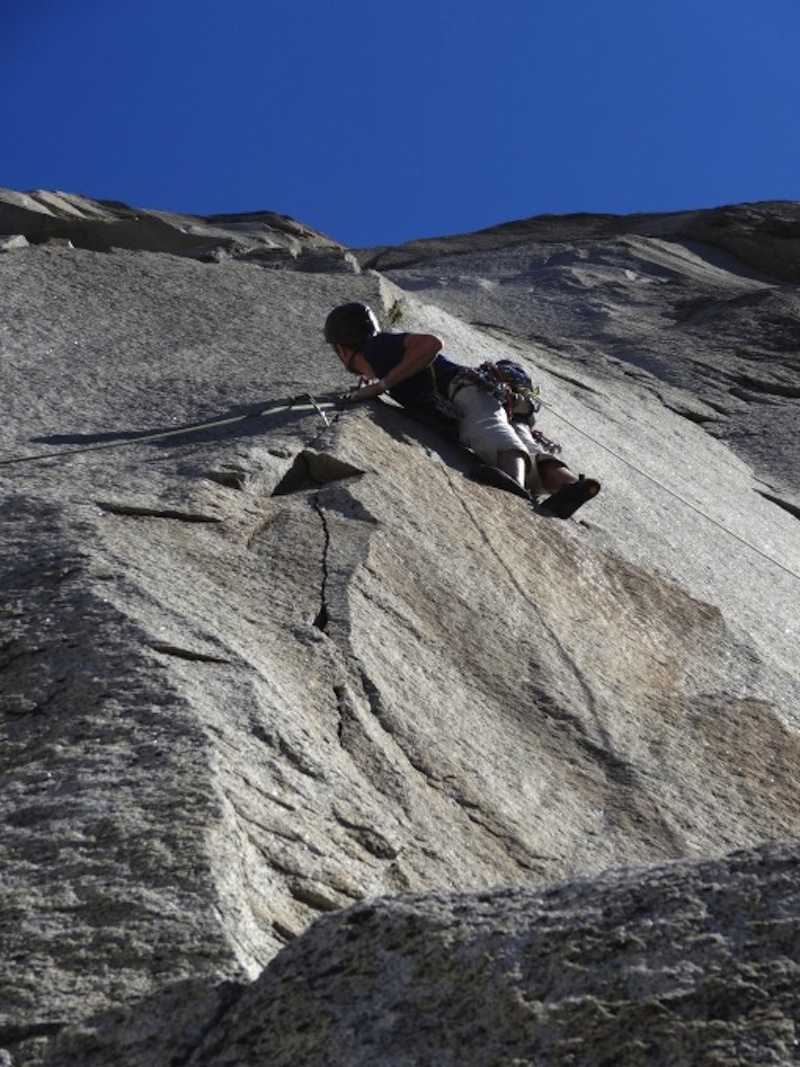 “We cruised up the clean white granite for a few pitches but my confidence was shaky. Nervous and unsure I fell off the Cubano Corner, pitch eight, and came back to the belay … I worked on my mental attitude, tried to get my breathing in-check and rallied. Sticking the move was unreal, it was right at the limit of my reach and in that moment I saw the whole route come together,” he wrote on his blog.

After surmounting the crux, the pair continued up the remaining 5.11, 5.10 and 5.9 climbing all the way to the summit. By late afternoon, they had become only the second team to have free climbed Liberty Cap, one of the last walls in Yosemite to be freed.

“…When we reached the summit there was nothing but bliss. I’m proud of all of the friends who have helped me on this project. The times spent on the wall hoping it would go and putting the pieces together were incredible. For a group of weekend warriors to put up a new free route in Yosemite is amazing!” he wrote.

Cedar Wright and Lucho Rivera made the first free ascent of Liberty Cap this past spring when they climbed Matah (5.12c). Though Stefurak had hopes of being the first to free climb Liberty Cap, he has only admiration for that pair’s feat.

“I also am stoked that Lucho and Cedar freed Mahtah earlier in the season. I spent many days talking details with Lucho, sharing the psyche and rehashing all the work that goes into freeing a route. Hopefully 2013 will be remembered in Yosemite as the year of Liberty Cap with two free routes going up the Southwest Face.” 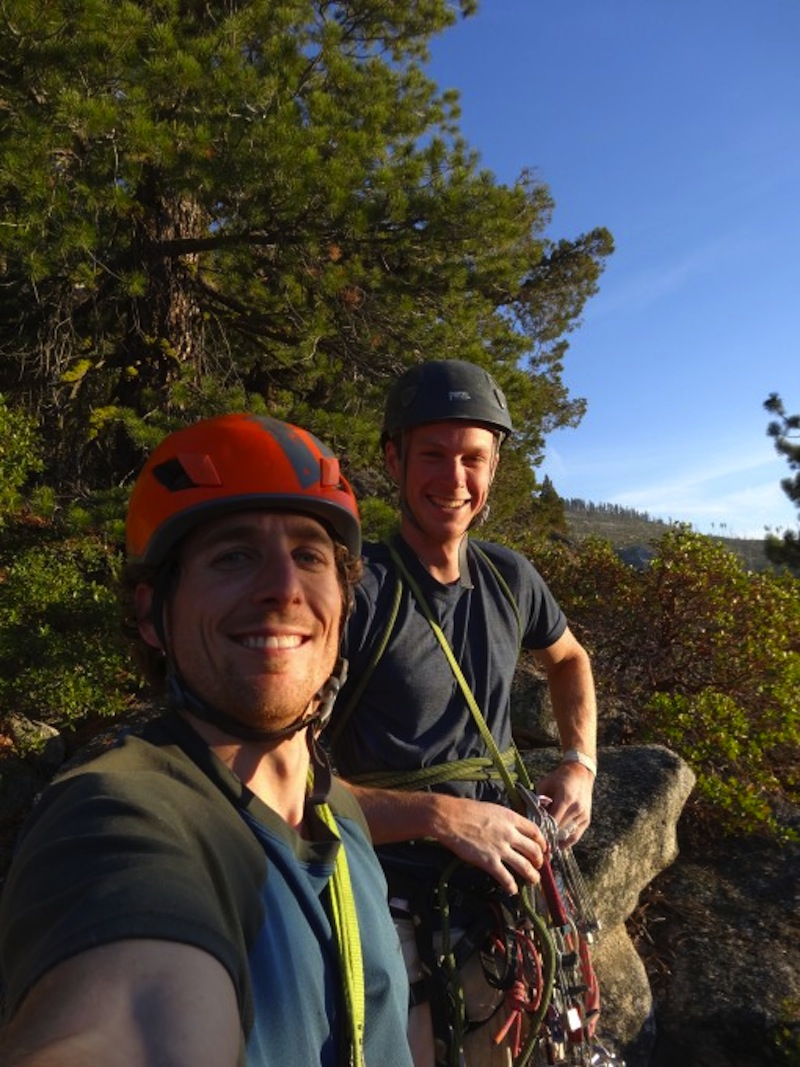 With winter coming, it very well could be. Unless Kevin Jorgeson frees the Dawn Wall, this will indeed be the year of Liberty Cap. And for all of the weekend warriors out there, Stefurak and Steel’s ascent is a confirmation that big, imaginative, and undone adventures are still out there for the common man’s taking.