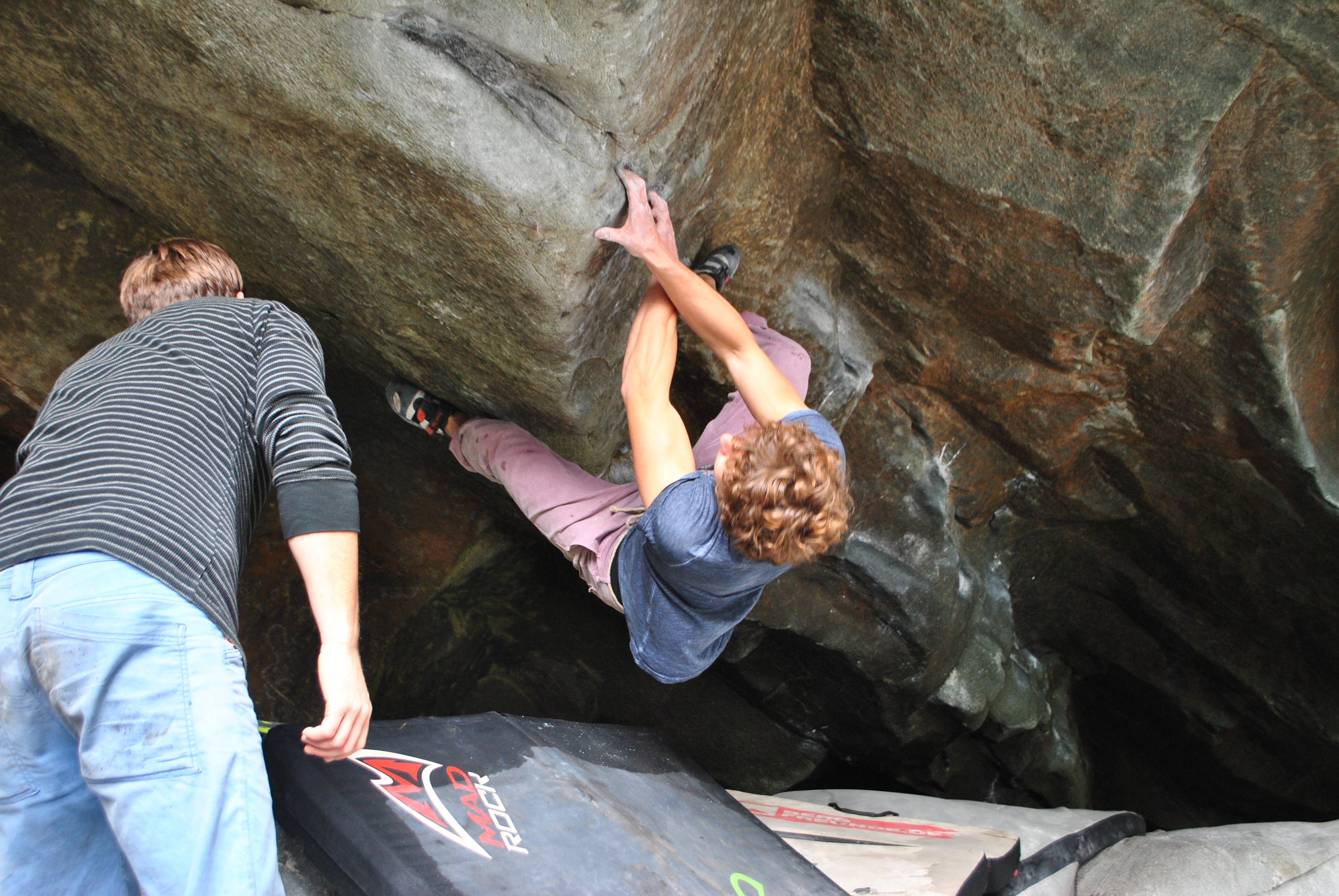 “I gave you the beta,” Phillip said. “Now pull harder.”

Peter crumpled on the bouldering mat. I tried the same move with more flailing and less success. We apologized to our guide, Philip: While we would love to pull harder, doing so was physically impossible for us. Philip laughed, but he didn’t understand.

The Magic Woods is a jumble of angular gneiss boulders by a roaring stream, hidden up in a foreboding gorge in the Swiss Alps. Upon reaching the gravel parking lot, you traipse across a wooden bridge in order to begin tripping on the gnarled roots that comprise the greater portion of the trail. You barely have the chance to look up and see the bright-green plague of moss that carpets everything or the towering pine trees that rise improbably from the tops of boulders. You must somehow keep your feet among the roots, mud and stone.

Once you are able to stop and look, you see a world of bouldering with more than a few sketchy landings. Luckily, the rock is solid and grippy, even with the regular rain. Moreover, the woods are full of the sound of rushing water, mixed with the languages of Poles, Swedes, Germans and Spaniards who all travel here to test their fingertips on world-class rock. It’s a boulderer’s paradise. 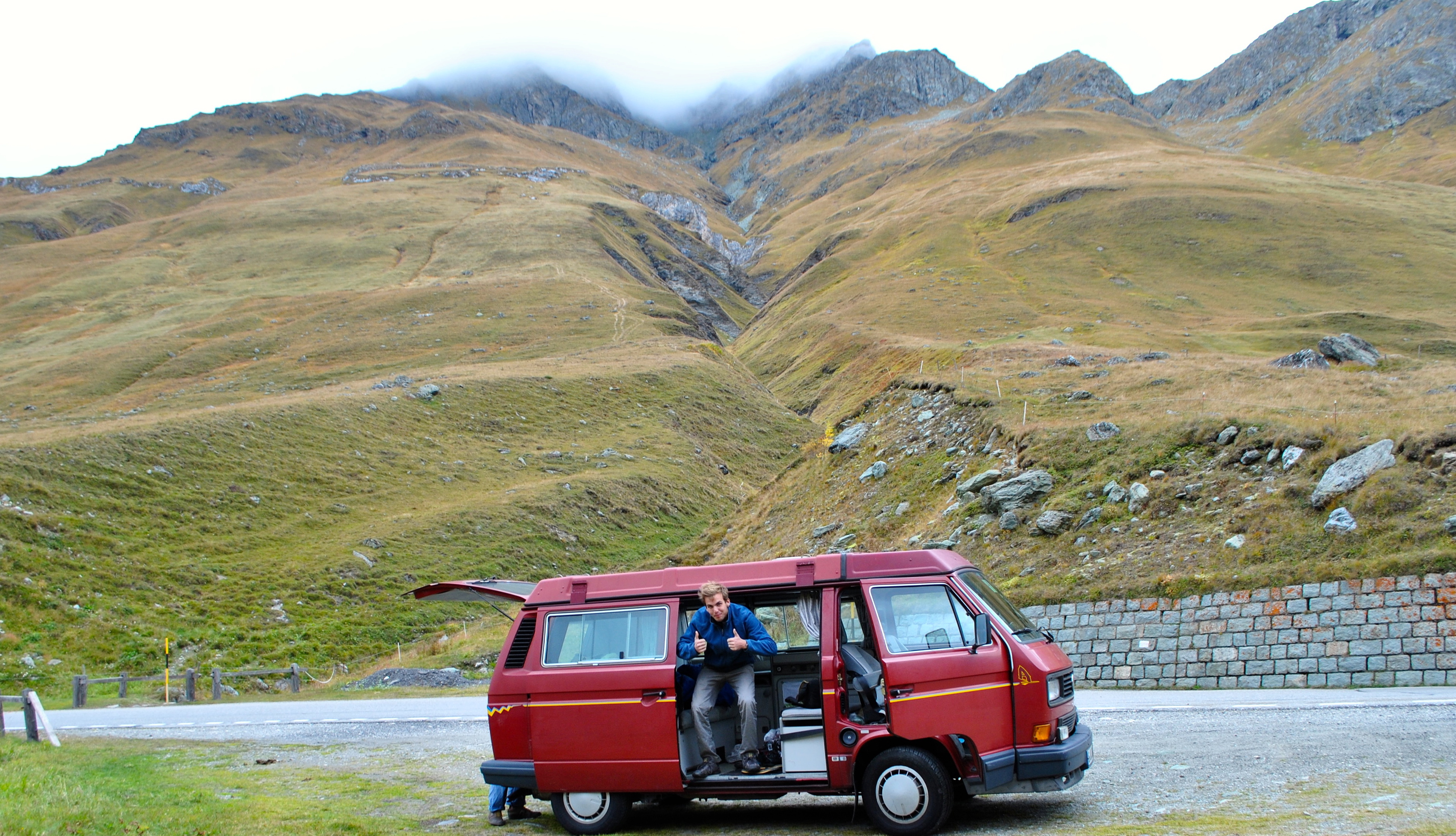 We piled into Philip’s red VW pop-top micro-bus (aka “the van”) and set off from Stuttgart, Germany. Well-equipped with a case of German beer, climbing shoes, and a stack of crash-pads, we drove along gorges and through mountain tunnels until the towns became villages and the villages became hamlets. Peter and I gaped through the windshield. Happy that his guests were happy, Philip worked the stick-shift, trying to coax some speed out of that little red van. We rolled into the parking lot and took to the woods.

I knew the basic hierarchy coming into this trip. Philip would crush, Peter would put up a good showing and I would have to put my self-esteem in something other than checking hard grades.

I was simply happy to be on rock again after months of time-consuming work, first teaching English in Nepal and then laying fence in Montana. Peter had been teaching in Cairo, also without opportunity to climb, but his high tolerance for pain, his natural athleticism, and his bounding enthusiasm had historically conquered such meager issues as being out of shape. Peter’s muscles still remembered sending V10, so even out of training he could realistically consider V6 and V7. And then we had Philip, who could climb whatever he damn well wanted.

We fell into a routine: non-stop climbing all afternoon followed by a heavy dinner, a few beers and then Swiss chocolate by the bonfire with our fellow climbers. In the early morning it would invariably rain, so we would sleep in till 12 in hopes that the rock might eventually dry off. The deep mountain valley only received four or five hours of direct sunlight and that was if there weren’t any clouds, so we learned to embrace the darkness. It was easy to sleep, the rocks needed time to dry and our confused muscles appreciated the rest. But when noon did roll around, the rock was well worth the wait.

I was enchanted by the tall, friendly crimps on Blue Sky of Mine (V3), which conveniently turn to jugs when it gets high enough to think twice about appropriate risk-taking. However, even Blue Sky of Mine lacks the modernist aesthetic of U-Boot (V4+), a simplistic, long prow of heel-hooks which might even trick a boulderer into feeling a sport climber’s pump. We crowned ourselves the submarine captains of our Untervasser Boot, sang a round of “We All Live in a Yellow Submarine,” and then settled down to watch Phillip climb. 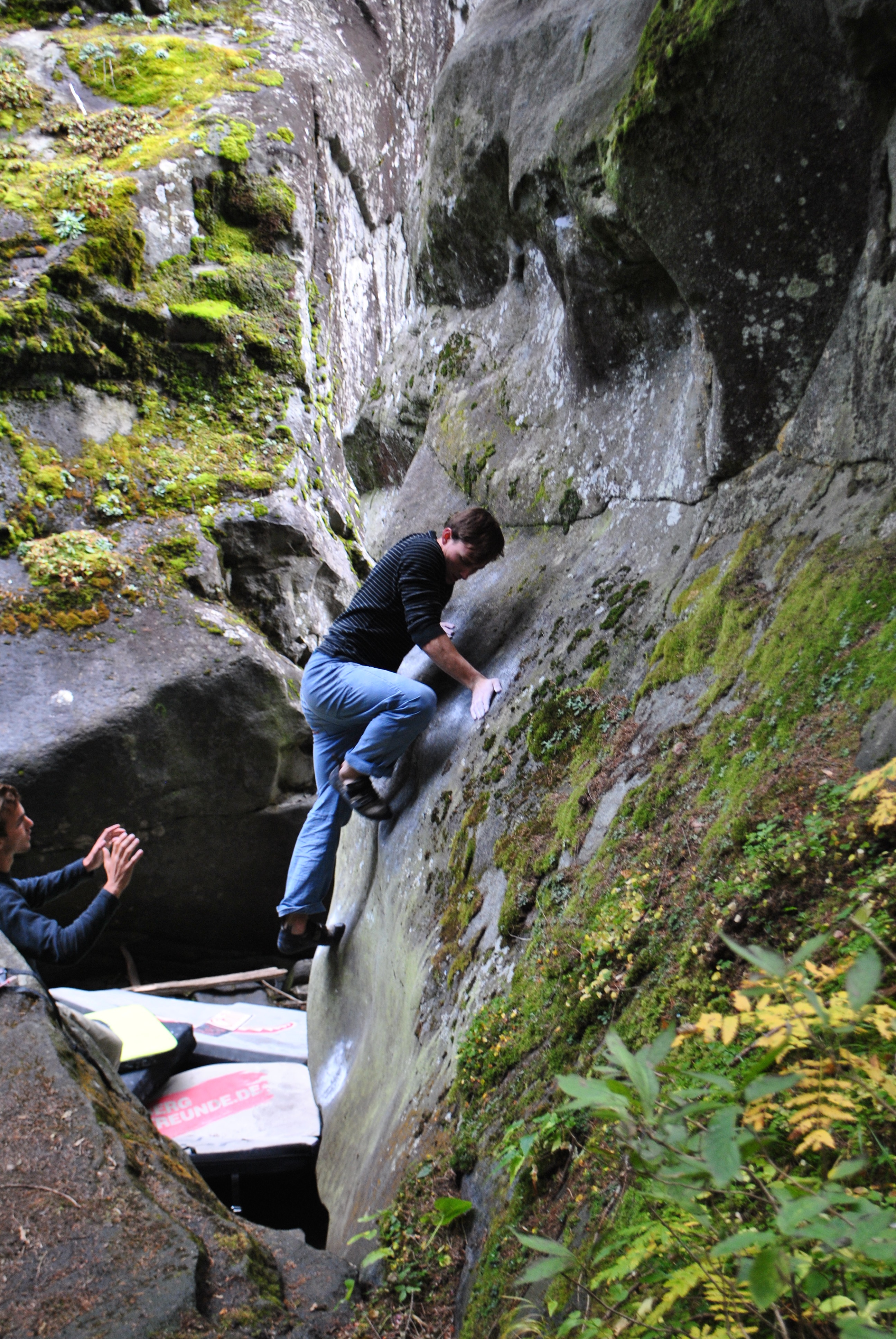 Walking past Nalle Hukktaival’s and Jimmy Webb’s incomprehensible route, The Understanding (V15), we clambered underneath one boulder and then another to find The Right Hand of Darkness (V12+) and its sister climb The Left Hand of Darkness (V12). Philip sent The Right Hand of Darkness, which was an awe-inspiring accomplishment to Peter and me, though just another day-in-the-life for Phillip, and we continued wandering through the boulders, stopping at The Samurai’s Tango (V9) before heading down to the Beach Bloc boulder to try our hands at Grit de Luxe (V7) and Slip Slap Slop (V5+). We rested by the creek in the mid-afternoon, eating thick slabs of brown bread dabbed with cream cheese. Even with raw skin and aching tendons, we found ourselves possessed with a certain meaningless contentment about the universe.

At the campfire one night, we discussed of a peculiarly Russian habit that we’d only heard of by rumor. It consists of jumping into a frigid river, whipping one another with willow wands, and then sweating it out in a sauna. A fellow climber from Sweden remarked that Russian scientists claimed it to be an effective treatment for depression. We all laughed, but then I thought: Who was to say our strange suffering on the rock was any different?

Not that Peter, Philip, and I were treating ourselves too harshly. We buried the slightest pang of hunger under an avalanche of maultaschen (a meaty German dumpling), and quenched our thirst with never-ending streams of Rivella (a fizzy Swiss drink reportedly made from milk serum, whatever that is). No need was neglected. We happily spent rest days at the climber-friendly hostel in the tiny town of Cresta-Avers just up the street, or in the mineral spa and hot springs in Andeers just down the road.

Before long, though, we were back to straining and suffering in the magical boulder maze. Some folks seem to come to the Magic Woods mainly to hand-roll their cigarettes and smoke in peace. Others fixate on the edges and angles of the rock, trying to tick the highest grade they can find. We took an Epicurean posture towards our time at the Magic Woods with a principled insistence on beer, bread, cheese, and chocolate as the four pillars of contentment. However, it was usually the difficult movements on unyielding rock that gave us the most happiness. Perhaps the Russians are right. Perhaps suffering is the cure.