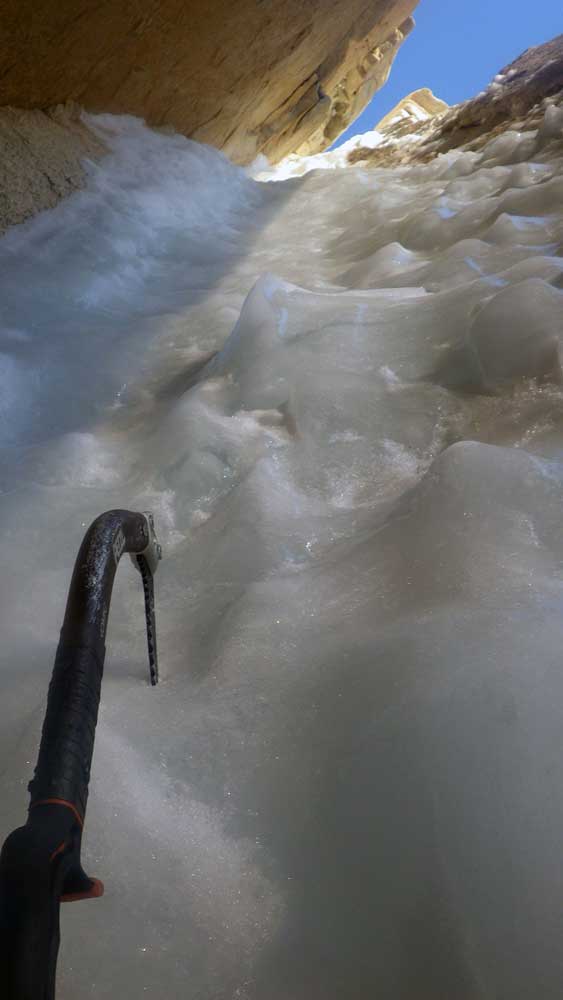 Marc-André Leclerc threw a drop-knee and stemmed his way up the frozen chimney. He wasn’t sure that he would descend the same way, so he chose to free solo the pitch with his pack on, trailing a rope. He hung from his right ice tool, palmed the left wall with his other hand, and worked his crampons higher on the opposite side.

Leclerc pulled onto the summit snow slopes, but Aguja Standhardt wasn’t letting up just yet. A thick rime mushroom—emblematic of Patagonian towers in the Fitz Roy massif—guarded the summit. These mushroom caps, formed when gusts off the continental ice field slam into the wall of towers, have shut down many summit bids, so close to the finish. That day on Standhardt, though, Leclerc found a circle of blue sky breaking through the blinding white. A tunnel gave way to the summit.

“But the tunnel was so narrow that my shoulders barely fit inside,” Leclerc wrote on his blog. Unable to swing his tools or kick in the confines of the chute, he resorted to “rodent technique,” he says, “similar to a squeeze chimney in rock, but distinctively more ‘rat-like’.”

Leclerc stood on the summit and checked time. It was 4:30 p.m.—12 hours flat since he left the Niponino camp at the base of the Torres that morning. He just completed the second known solo ascent, after Colin Haley in 2010, and first known free solo of the Tomahawk to Exocet Link Up on Aguja Standhardt, Fitz Roy massif, Patagonia.

Leclerc, 23, was itching for solitude and adventure after a two-month Euro climbing trip and another month of summer crowds in Squamish, B.C. “It was in July that I first envisioned going on a Patagonian ice soloing bender, “ he told Rock and Ice. “Just the mental picture got me so psyched!”

Leclerc disappeared to Patagonia and found solace in the Southern Hemisphere’s winter.

“It is basically the locals and myself,” says Leclerc. “There were a handful of European climbers in town a couple of weeks ago, but they have now left. I am certainly the only person sessioning the Torre Valley at the moment.” 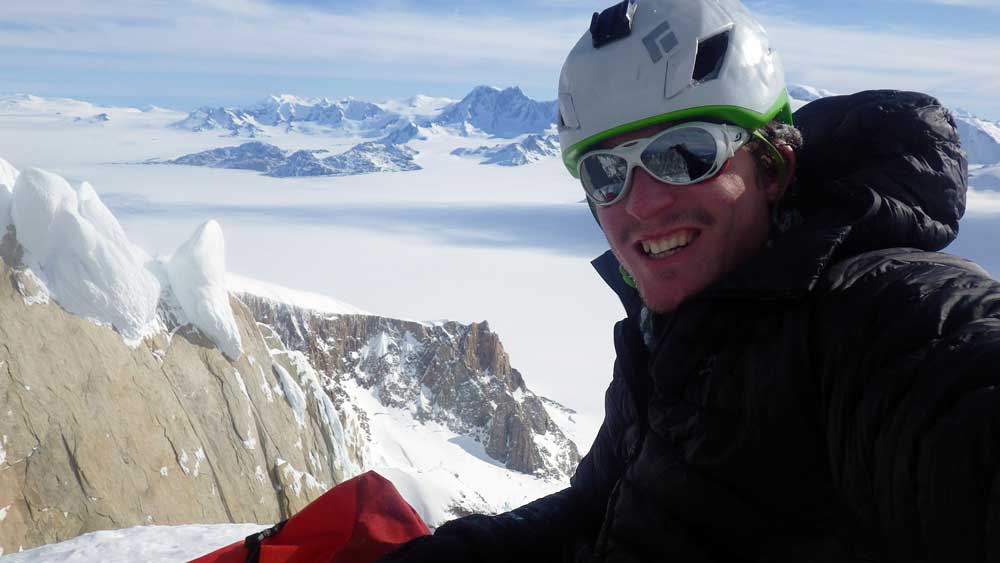 Leclerc came with a mission—to solo Patagonian towers in winter. He arrived in El Chaltén, after three days of travel, in the dark. Wasting no time, he left his hostel the next morning with his boots on, in the dark.

He carried a load of gear to caché at the Niponino climbers’ camp below the Torres and returned to town that night. After two rest days, “bouldering lots, ticking off many projects,” he says, he made a second schlep into the valley. Leclerc had learned, from his past two trips to Patagonia, that “making several carries is a more advantageous strategy over making only one trip with a crippling load,” he writes.

Nonetheless, his left IT band took a hit and he spent several days “stretching, massaging,” and pumping the anti-inflammatories, “hoping that I would still be able to make use of a promising window in the forecast,” he writes.

“The window appeared to be best from the 20th of September onwards, with an unusually large high-pressure system settling over the area for nearly a week.”

The Autumnal Equinox in the Northern Hemisphere is the Vernal Equinox in the Southern Hemisphere—in other words, on the 23rd of September, Leclerc would be out of winter. “…and thus my hopes of making ‘winter ascents’ were unlikely to be realized,” he writes. “In Patagonia it is important to strategize in the most logical manner for a successful climb, and to not go too early simply base on how high the stoke is. For me, this can be a crux.” 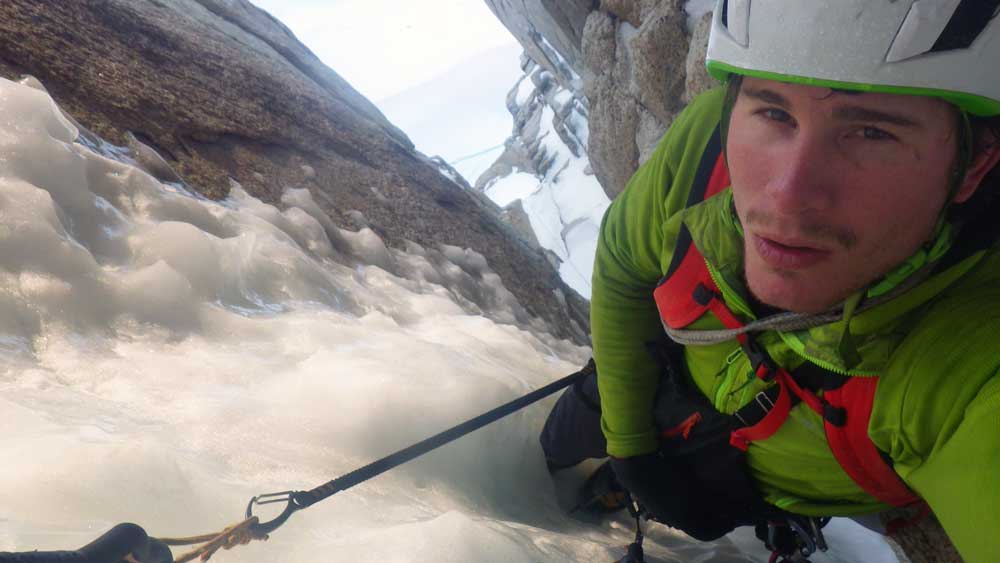 But with a week of good weather in the forecast and the Torre Valley to himself, Leclerc didn’t let the equinox ebb his enthusiasm. Winter or spring, he was going to climb.

Under blue skies on September 20, he set out from Chaltén and skied up the glacier to his camp at Niponino. The next morning, he skied and climbed to El Boquete pass at the head of the Torre Valley, from where he would be able to suss the conditions of Cerro Chaltén’s Supercanaleta route.

“A few months had passed since I had really spent time in the mountains,” Leclerc writes, “and soloing a dry Supercanaleta did not look like the best way to start things off.

“The South Face of Pollone looked like a smaller objective, and it also looked to be in excellent condition.”

Leclerc soloed Rayuela on the south face of Cerro Pollone to where the route ends at the summit ridge, but rim ice and picks bouncing off rock prevented him from completing the last 30 meters to the East summit. Although he wasn’t tired, he forced himself to rest the next day to prepare for his main objective, the reason he came to Patagonia, the Tomahawk to Exocet Link Up on Aguja Standhardt.

“I might as well try to do what I came here for,” Leclerc writes.

The Tomahawk to Exocet Link Up takes Tomahawk (WI6 C1 450m)—first climbed by Conrad Anker and Steve Gerberding in 1994—into the upper ice chimneys of Exocet (WI5 500m)— FA: Jim Bridwell, Greg Smith, and Jay Smith, 1988—to the summit of Aguja Standhardt.

[Click here to check out the route topo on pataclimb.com] 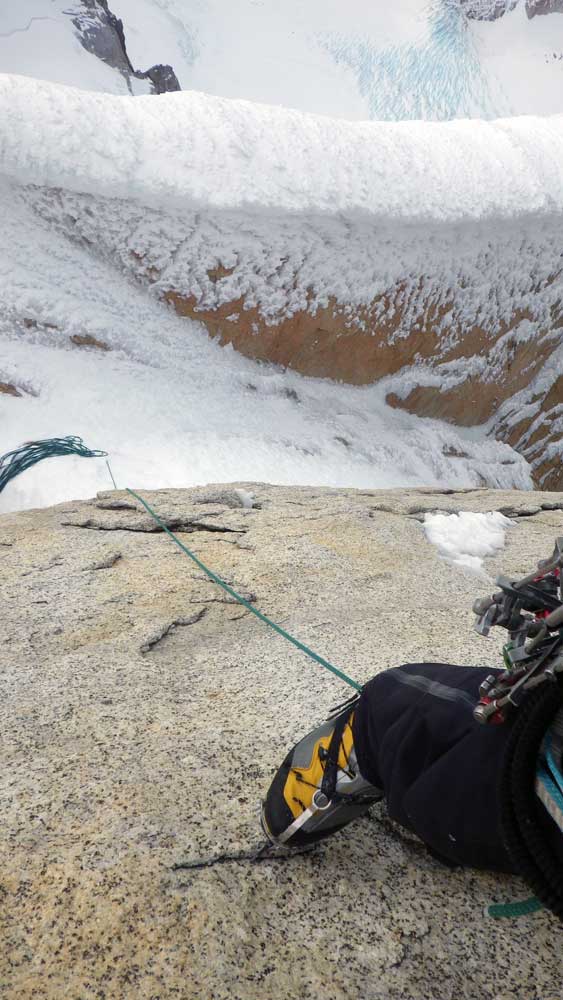 Leclerc hit good conditions, “not perfect”, but “about as good as one could ever expect to get on a long route in Patagonia,” he says. “The ice on Tomahawk was a bit sun baked, and above on Exocet the ice was at times brittle, but the chimney features kept things from ever getting too strenuous, even if one had to work a bit for good placements.

“The biggest factor, was that I was able to climb the mixed cruxes without gloves. I did encounter the screaming barfies, but regardless, this made it easier to free solo the mixed terrain.”

Leclerc has used this tactic before to free solo mixed ground on the Northeast Buttress of Slesse, B.C. in winter. He says, “It really is the key to feeling as secure as possible on these types of routes.”

After summiting Standhardt, and rappelling back through the mushroom tunnel as “straight as a pencil,” he retraced his steps across the summit snow slopes and rapped directly through V-threads in the chimney below, “retrieving my slings along the way and leaving nothing behind aside from holes in the ice,” Leclerc writes.

“The route was totally classic! Just phenomenal positions throughout with great vertical chimney features,” Leclerc says. “In the middle it gets pretty easy for several pitches, just steep snow and easy ice (grade 4 maybe?). But above it kicks back and gets technical again.

“Overall it is just a total global classic in its style, without doubt!”

Leclerc has one more week left in Patagonia and a weather window is opening today. “The psyche is for real!” he says.