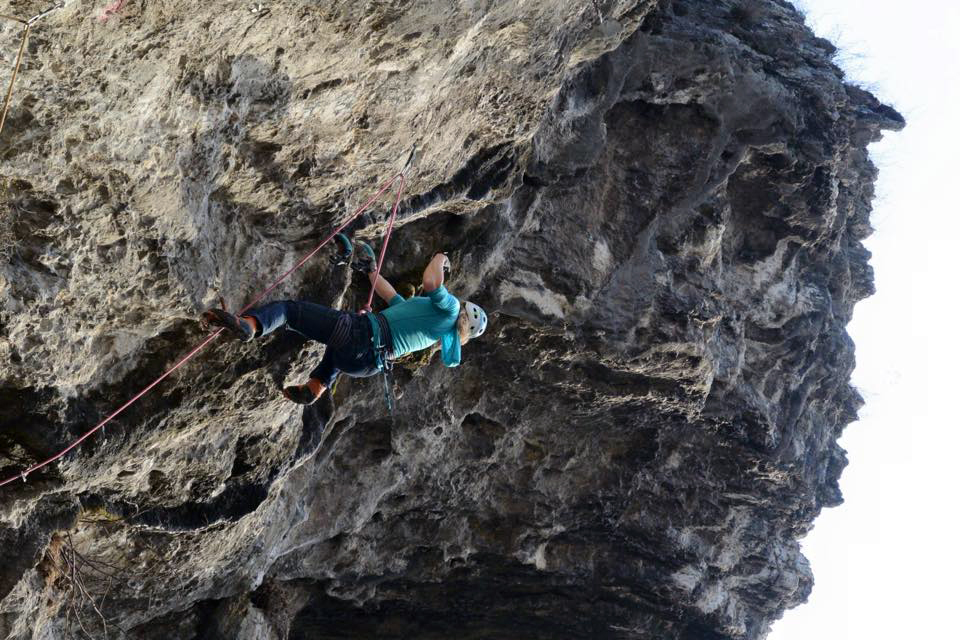 Gordon McArthur as he attempted Kamasutra. McArthur fell near the top of the route and his ice tool, stuck in a crack,
was left dangling.

Kamasutra, bolted by Matteo Rivadossi, is a 30-meter pure dry-tooling route, which gives it a ‘D’ grade instead of a mixed-climbing ‘M’ grade
(requires both rock and ice). The route is semi-natural, with a handful of drilled pockets. Angelika Rainer, three-time ice climbing World Champion,
claimed the route’s first ascent in January 2014 (check out the video of her climb below).

With no expectations, and fed with beta from Rainer and McArthur, van der Steen tried the route to see if she could retrieve McArthur’s tool. ” I moved,
moved and did I-don’t-know-how-many-figure-of-fours. And then I was there.” She had reached the stuck tool. Instead of climbing with the extra tool,
van der Steen dropped it to the side to avoid hitting anyone below. “I got my own tool into the hold and managed to move on. And on.” 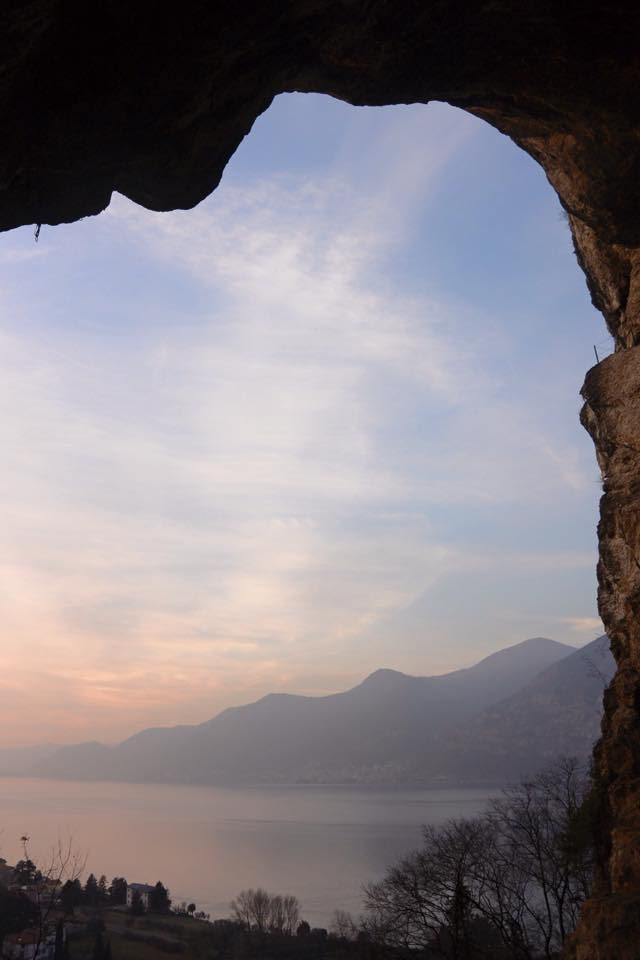 Van der Steen told Rock and Ice that she’s a slow climber and thinks that might be a
reason why she “never [does] too well” in World Cups where time is an important factor. “But when I can keep my head clear I can always recover, no
matter what route. And that was a great advantage on this huge, long climb,” she says.

Nearing the top of the climb, she used her mental perseverance to push through: “Okay, keep calm now,” she told herself. “Shaking, getting
my normal breath back, I moved on, and on until the last long move. ‘Now you have to clip from here,’ Angi called up. I had the last hold. I clipped
the anchor and was so surprised.

“Did I really just flash Kamasutra?”

When she got to the ground, she wasn’t pumped at all, she says, “therefore it didn’t feel like I’d done something super difficult. It was only later that
evening when I realized and heard probably no one had ever done a D13+ flash.

“The only reason I went up there was because Gordon McArthur got his axe stuck. I thought it would be way too much for me to climb it.

“Maybe that was just the thing I actually needed. Going up without any expectations.”

Adding to the surprise, when McArthur retrieved his ice tool from a bush beneath the cave, it was broken in half. “I felt sorry, guilty!” says van der
Steen. “And I owe him a tool.”

Van der Steen returned the next day and sent Kamasutra again, but this time in French Dry-tooling Style (DTS)—climbing
without the use of Yaniros (French for figure-fours and figure-nines), extra long ice tools and third handle gripping.

Van der Steen explains the origin of the style: “DTS is a French style of climbing invented by a group of climbers from Usine (close to Grenoble). If you
use a figure-of-four in a route in Usine, your ascent doesn’t count. So all together it’s a local ethic.

“Personally I’m not sure yet about this technique. But I’m open to trying [it] to see if it’s better, more logical, more beautiful.”

Jeff Merçier, who made the second ascent of Kamasutra in French DTS, said he believes it could be D14- without the use of Yaniros.

“It was great to have done [Kamasutra] also in DTS, “ van der Steen says, “harder on my hands and core. But fun!”

[UPDATE: Susan Owen reported in the comments that Ryan Vanchon, who won the 2016 Ouray Mixed Climbing Competition, flashed Kamasutra
(D13+), on February 2. She also reports that Janez Svoljsak and Yannick Glatthard may have flashed it as well.]

Watch Angelika Rainer on the first ascent of Kamasutra (D13+):