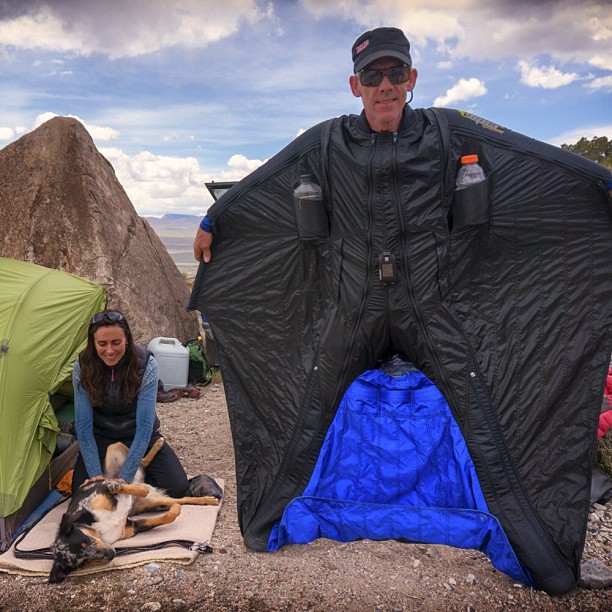 Mario Richard, 47, husband of climber and BASE jumper Steph Davis, died on Sunday, August 18, while BASE jumping in Italy. Richard had been in Arco, Italy, with Davis, climbing and jumping, and recently relocated to the Dolomites. He was wingsuit flying off Sass Pordoi when the accident occurred.

Richard, originally of Quebec City, moved to Moab, Utah, about 10 years ago to pursue BASE jumping. He, with Davis, ran Moab B.A.S.E. Adventures, specializing in guided BASE jumps, climbing and even tandem BASE jumps for people with no experience, a $699 service highlighted in a June 2012 article in the New York Times.

Richard got hooked on skydiving when as a young boy he crafted parachutes for his G.I. Joe. He made his first skydive in 1988 and his first BASE jump in 1991 during Bridge Day at the New River Gorge. He was one of the world’s foremost jumpers, with some 7,000 sky dives and 2,000 BASE jumps. Notably, he jumped from the rim above the Kingfisher in Utah’s Fisher Towers, landed on that formation’s summit, repacked his chute and jumped the Kingfisher watch video. Another time, he parachuted from an airplane, landed atop Castleton Tower, repacked and jumped again. Richard was a master of canopy flying, and was well known and loved among the climbing and BASE jumping communities.

In 2009, pro skier Shane McConkey also died BASE jumping in the Dolomites when, after a double back-flip ski jump, he had difficulty releasing his skis and didn’t have time to deploy his chute. The details of Richard’s accident have not been released.