This article was previously published on trango.com

On Friday, September 23rd, I reached my lifetime sport climbing goal of climbing a 5.14d. Actually it’s a bit of a stretch
to call it a “lifetime goal,” since for the vast majority of my life I never dreamed I’d be capable of climbing a route so hard. That changed last
summer. I was at the International Climbers’ Fest in Lander, Wyoming, listening to Ethan Pringle’s inspiring keynote address about his journey to send
Jumbo Love. He spent seven years working the route, including 18 days during the Spring 2015 season in which he eventually sent it. I had
never spent 18 days on any route ever, even spread over multiple seasons or years. 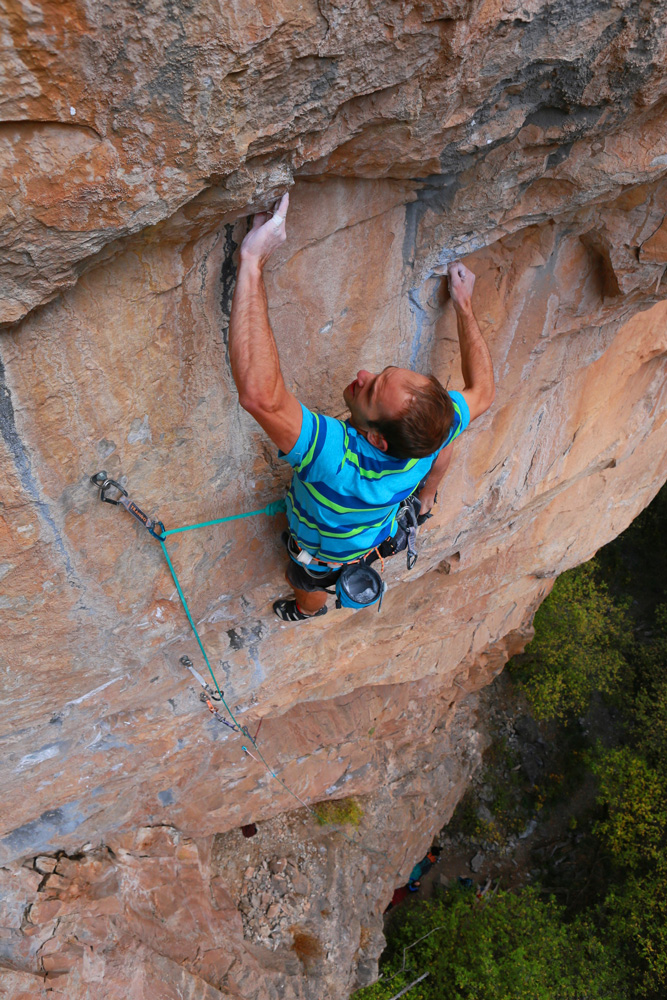 Jonathan Siegrist arrived in 2011 to bag the first ascent. This
attracted more suitors, until a key hold in the crux crumbled, leaving the route’s status in question. Jonathan eventually re-climbed the line to prove
it would still go, but despite attempts by most of Rifle’s best climbers, no further ascents came until Jon Cardwell put it together in August 2015. 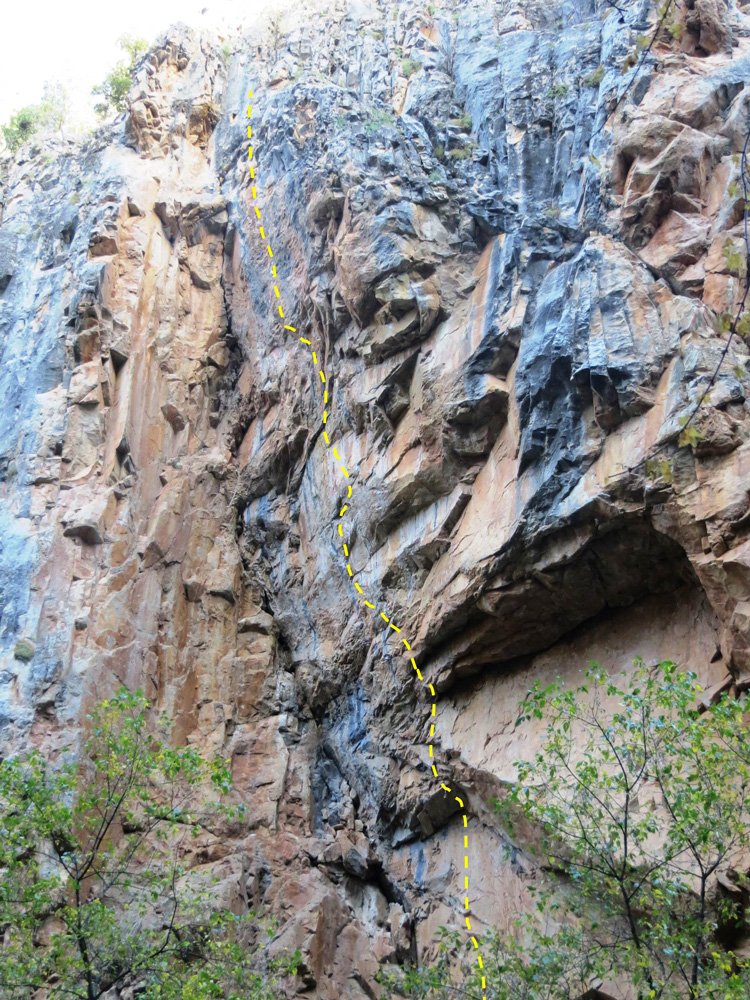 I rested about an hour and tied back in for my last attempt of the day. I cruised up the opening slab,
over a short roof, then into the business. I flew past a series of crux holds, each one representing the doubts and tribulations I eventually overcame
to master them in previous seasons. I was going well, confident I would reach the rest at two-thirds height. Once there, I implored myself to try hard
and remain focused at the crimp crux—just keep cranking full speed ahead until you fall off.

Eventually I went for it, feeling the first wave of pump doubt about ten moves higher. I kept motoring, paddling my hands and feet toward the Crimp Crux.
I stepped up to the hovering, thin panel of rippled limestone, and grabbed the sloping and thin “Pinch Plate” with my left hand. This time I completely
committed to latching the crimp—I tried hard and focused on doing the move correctly. I hit the shallow crimp—not especially well–but I
didn’t care and I didn’t hesitate. Instead I immediately rolled it up, and proceeded, fully expecting to fall on the next move—a sideways slap
to an incut slot—but I didn’t. The key piece of beta turned out to be: TRY FUCKING HARD. Don’t give up, and don’t hesitate. If you hit the hold,
however badly, just keep going. Assume you have it good enough, until gravity says otherwise. That’s not always the right beta, but it was right on
that move, on that day.

I had finally done the Crimp Crux from the ground, but there were plenty of hard moves remaining. I felt pumped but I kept charging. I stabbed for a shallow
three-finger pocket and latched it. As I moved my left foot up to the first of two micro edges, my leg began to shake. I stepped my right foot up to
the next micro edge, and it too began to shake. I got my feet on as well as I could despite the vibrations, leaned right, and stabbed left for a half-pad
two-finger pocket, again expecting to fall. I latched it and pulled my trembling right foot up. Now I hesitated. The next move was really hard. While
I’d never reached it on redpoint before, I’d had plenty of nightmares about falling off here. And now there was no denying–I was absolutely pumped.
I took a good look at the target (a four-finger, incut half-pad edge), settled in my stance, and with zero reluctance I slapped for it, putting 100%
effort and concentration into the latch. I hit it accurately, but I had a lot of outward momentum to stop. I had it well enough though. I bounced my
fingers on, amazed that I stuck it.

Next I had to high-step my left foot
into the incut slot. It felt incredibly hard for a foot move, but I got it on there, somehow. By now my elbows were sticking straight out. I noticed
I wasn’t thumb-catching with my right hand like I ought to, but it seemed too late to correct. Now the only thing to do was huck for the jug and pray
the friction was sufficient to keep me on the wall. Somehow it worked, but I wasn’t home free yet. I was pumped out of my skull and had one more long
throw to do. As I was wiggling my left hand into the best position on the jug, I could feel the lip crumbling under my fingers. Not good! I kept it
together despite an evil impulse to give up and jump off (saying take wouldn’t have helped, I was now ten feet above the last draw!). I squeezed a
few fingers of my right hand onto the jug so I could adjust my left hand and clear the new formed debris. I pulled up into position for the throw and
hesitated for an eternity, fruitlessly kicking my flagging left foot around in hope of some purchase.

I felt my momentum fizzling and my hips sag. As I imagined my pathetic, sorry-excuse-for-a-climber-carcass hurtling towards the ground after failing to
even try a 5.9 dyno, I heard, for the first time, the shouts of encouragement from the gallery of climbers warming up at the Project Wall.
At my moment of greatest doubt, although not uttered particularly loud, I heard clearly, as though he were standing next to me, Dave Graham* calmly
urge “Allez.” I can’t explain it. It wasn’t the word but the way he said it—like he was talking to himself, and sincerely wanted me to do it.
That was the difference, and in that moment I chose to do it. I slapped up and stuck it.

[*the first American to climb Action Directe, and one of the first three to climb 5.15] 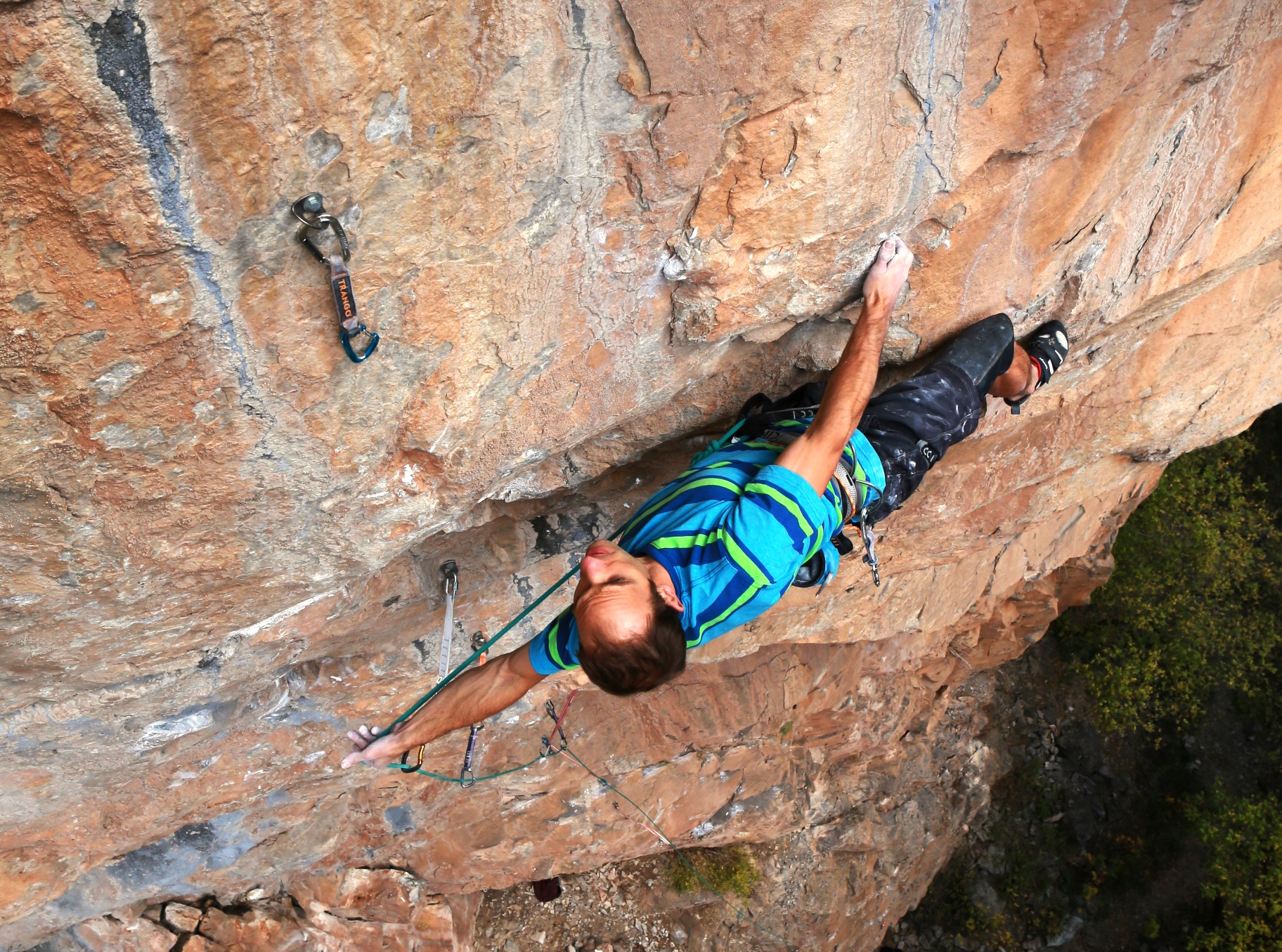 When
I first got to the ground, someone asked how long I’d been working the route, and I said “So long I’m embarrassed to say”. I am slightly ashamed of
how long it took. From a performance improvement perspective, I’m skeptical that was the best way to spend an entire year of my climbing life, even
though that is precisely the experience I signed up for. Still, despite my excessive sieging, the route never really got any easier. During the process
I (or others) broke at least seven holds that I can remember. If anything the route got objectively harder. That difficutly forced me to train far
harder, and sacrifice far more than I ever have for a sport climb. As a result, I got significantly better. I stayed focused and determined despite
countless setbacks and distractions.

That’s the great thing about a stretch goal—it forces you to stretch yourself in order to reach it. It wasn’t an experience I enjoyed, but it is
was the experience I needed if I wanted to know my limit. As I clipped the chains, I never once thought “well, that was easy.” Instead, I
reflected on how hard I worked over the last year, and marveled at how hard I tried in the moment of truth. I’ve never had to try that hard
during a redpoint. I’ve never successfully linked so many consecutive 50/50 moves. I doubt I ever will again. That was a special moment, the culmination
of a special year. From the admittedly narrow perspective of this one moment in my life, I can truly say, that is the hardest I can climb.

P.S., I have to thank my wife Kate. If you ever wonder how it’s possible for me to climb so much with two small kids, the answer is Kate. She takes up the ample parenting slack that my climbing creates. This project was particularly burdensome. Kate endured interminable belay sessions, interminable rest days, and my interminable whining over every little setback. I simply could not have done it without her. Thanks also to my brother Mike who constantly pushes me to be better than I ever think I’m capable of (and for the photos and belays). Thanks to Trango for supporting me despite a year of meager results, to Shaun Corpron for the belays, and to all my friends on the Rock Prodigy Forum who shared their wisdom and support with me.