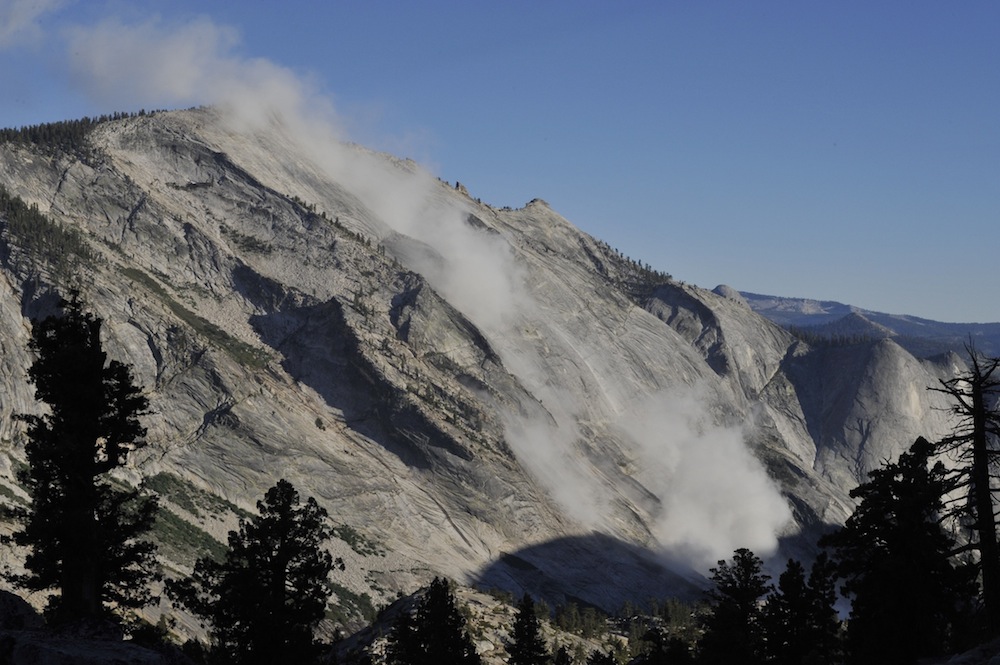 According to folklore, Chief Tenaya of the Ahwahnechee people cast a curse upon Tenaya Canyon after his son was killed in a skirmish with a battalion attempting to remove the natives from Yosemite Valley.

The canyon is known as the “Bermuda Triangle” of Yosemite due to the mysterious accidents, disappearances and deaths that have occurred there. And on June 14, around 8:00 p.m., another event bolstered the legend.

A cascade of rock tore down the west face of Clouds Rest—a granite shield midway up Tenaya canyon, adjacent to Half Dome—throwing a serpentine cloud of dust into the air.

Dustin Moore, a photographer who was shooting in the area at the time, captured the rockfall from across the canyon.

“It was dead center on Clouds Rest,” Moore told Rock and Ice. According to Moore, the rockfall appeared to have affected the classic, four-star route My Favorite Things (2,700 feet 5.10a)—first climbed by Hannah North, Tom Harper and Tom Malzbender.

“The route was on my list of things to climb,” says Moore.

Clouds Rest has been climbed since the ‘60s, but My Favorite Things is the only well established route up the remote mountain. 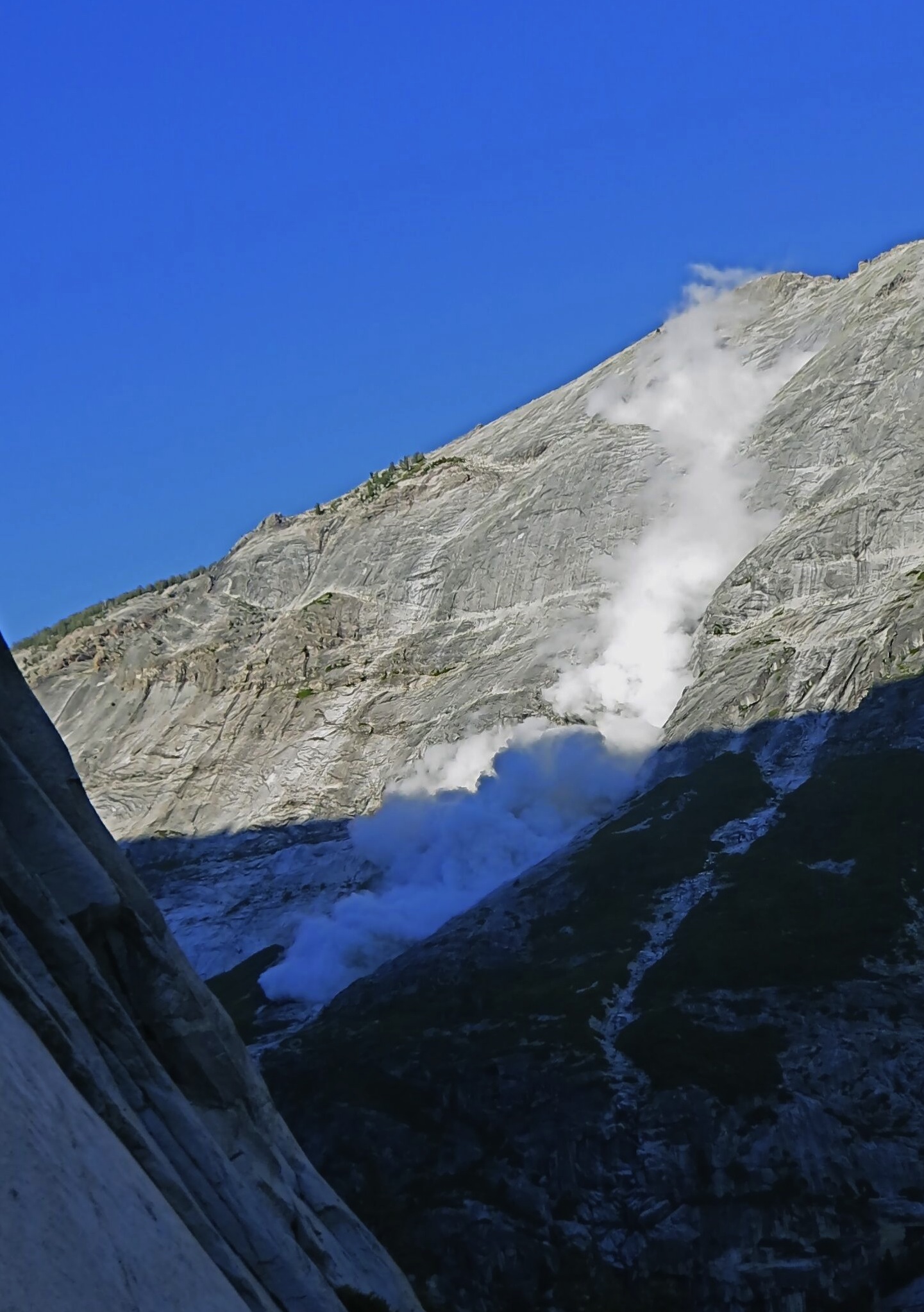 “The sound was comparable to serac falls and avalanches I’ve experienced,” Chris Edmands told Rock and Ice, “but this rockfall resonated so much throughout the canyon I could only assume it was much more destructive.”

Edmands was belaying his climbing partner Kevin Jones on the first pitch of the South Face of Mt. Watkins, with a view of Clouds Rest, at the time of the rockfall.

“We simply stood there with our jaws floored and marveled at the power,” says Edmands.

About a third of the way down the slabs, the debris cascaded over a 400-foot cliff, creating a billowing cloud.

“In contrast to the broken and tumbling stones, the particles seemed to float very peacefully and effortlessly above the face,” Edmands says.

After the rockfall subsided, the team continued climbing, “ears and eyes a little more keen on the one that could someday be headed our way.”

Climbers in the Valley assume that the Clouds Rest route My Favorite Things has been damaged, but the area is still too unstable to visit and the extent of the damage is unknown.

More information on the extent of the damage will be posted when available. 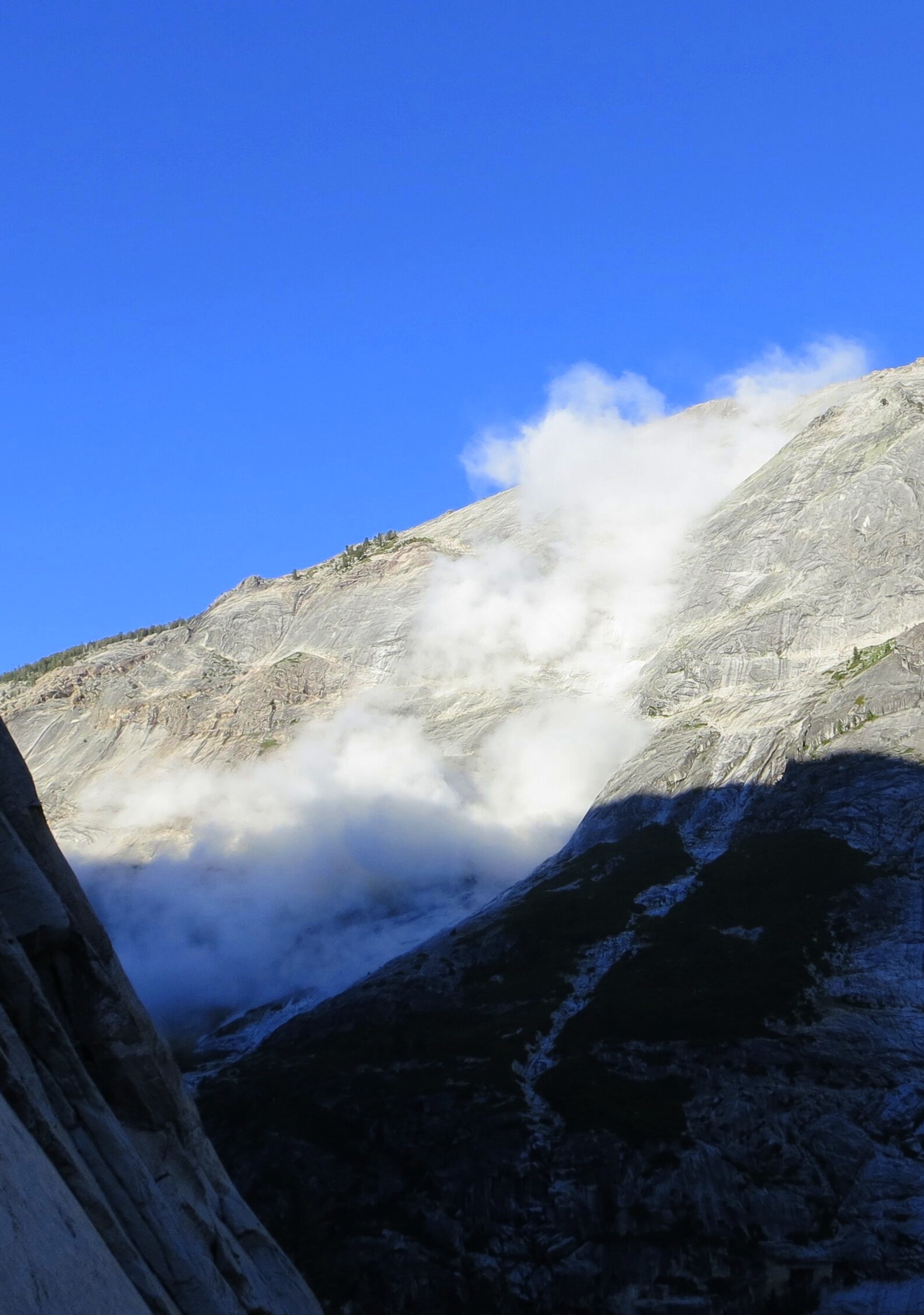