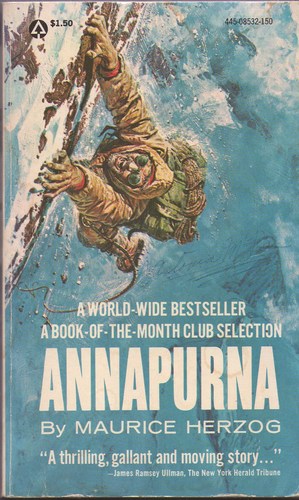 The legendary French mountaineer Maurice Herzog has died at the age of 93. Herzog, with Louis Lachenal, was the first person to reach the summit of an 8,000-meter peak. The French team’s ascent of 8,091-meter Annapurna in 1950 was an astonishing breakthrough performance.

The team reached the base of Annapurna only on May 18. The men had little more than two weeks before the monsoon would shut down the mountain.

On the extremely dangerous north face, they pulled out all the stops and blazed a route across avalanche-prone slopes and through the great ice cliff called The Sickle. On June 3, Herzog and Louis Lachenal trudged to the summit—but in doing so incurred frostbite so terrible it would cost Herzog all his toes and fingers, Lachenal all his toes.

A year after the climb Herzog wrote the book Annapurna, a page-turner that sold some 11 million copies, making it the most popular climbing publication of all time.

Annapurna was the book that turned me into a climber, at age 17. But as I later learned, and as I argued in True Summit: What Really Happened on the Legendary Ascent on Annapurna, that book amounts to a gilded myth. The true story of Annapurna 1950 was of constant conflict among members who somehow managed to cooperate in a brilliant ascent. In France, the elevation of Herzog to godlike status eclipsed the deeds of the other climbers, who (in my view) were the true heroes—Lachenal, Lionel Terray, and Gaston Rébuffat, in particular, but also Marcel Schatz and Jean Couzy.

The real story of what happened on Annapurna in 1950 is, I think, more interesting than Herzog’s fairy tale—and, ironically, even more heroic.

Whatever distortions of truth Herzog perpetrated in Annapurna, his role in the climb cannot be slighted. Though far less skilled or experienced than the three great Chamonix guides, Herzog always led from the front, and on the assault of the north face, he was as strong and climbed as boldly as did Lachenal, Rébuffat, and Terray. He was, when all is said and done, the driving force in one of mountaineering’s most legendary achievements.

Riding his fame, Herzog became the French Minister of Youth and Sport in 1958 and mayor of Chamonix. He was also on the International Olympic Committee for 25 years before retiring in 1995.

Due to his injuries Herzog largely retired from climbing but remained a popular public speaker—his slideshow presentation of Annapurna gripped audiences all over the world. Herzog was the last surviving member of the Annapurna team.