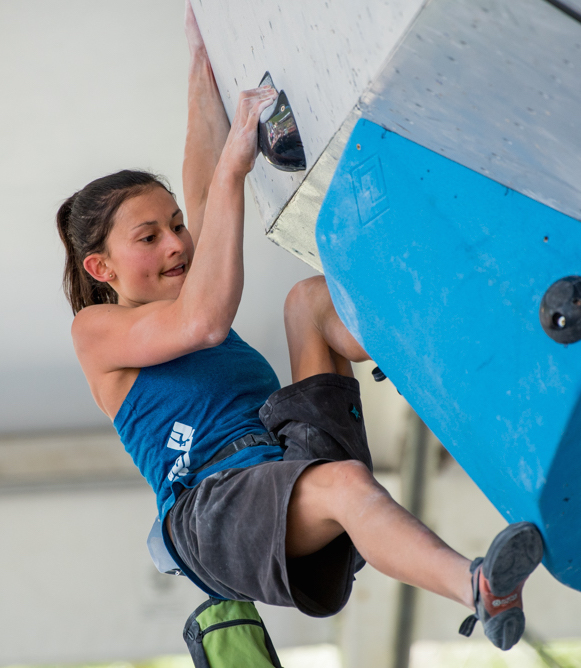 One hundred ten climbers from around the world went all out in Friday’s qualifying round. The top 20 men and top 20 women moved on to semi-finals Saturday
morning and the field was whittled down to six men and six women for finals later that afternoon.

Mascarenas, 18, topped all four finals problems in front of her home crowd. She flashed the first, second and fourth problems, and finished the third on
her second attempt. She was the only female competitor to top out W3.

Great Britain’s Shauna Coxsey, who has won four of six bouldering world cups this season, took second place—and secured the overall bouldering world
cup title, even with one more competition left in the season. She flashed W1 and W2 in finals but struggled on the technical W3 and only managed to
reach its bonus hold after three attempts. Coxsey likely would have flashed W4, but she started the problem on the incorrect holds and was called down
by a judge. She topped the problem on her next attempt.

Anna Stör of Austria took third place with two tops in five tries and she reached three of four bonus holds in four tries. She slipped ahead of France’s
Mélissa Le Nevé who also topped
two problems in five tries, but who took seven attempts to reach three bonus holds. Miho Nonaka, of Japan, and Alex Puccio, of the U.S., rounded out
women’s finals in fifth and sixth places.

Brutally hard finals problems on the men’s side led to few tops, but Fujii managed to send two and took home the gold. He flashed M1—the only competitor
to finish the problem—and climbed M3 in three attempts. He was the only male competitor to complete two problems in finals.

Russian climber Alexey Rubtsov nearly matched Narasaki in performance with the exception of three extra tries to reach the bonus hold on M4 in finals.
He rounded out the podium in third place.

Yoshi Ogata, representing Japan, also flashed M3 and reached the bonus holds on M1 and M2 in one attempt each, but he could not reach the bonus hold on
M4. He landed in fourth place, ahead of Rustam Gelmanov, of Russia, in fifth and Canada’s Sean McColl in sixth.

Watch McColl’s crazy dyno to iron cross on his first attempt of M4 in the video below: 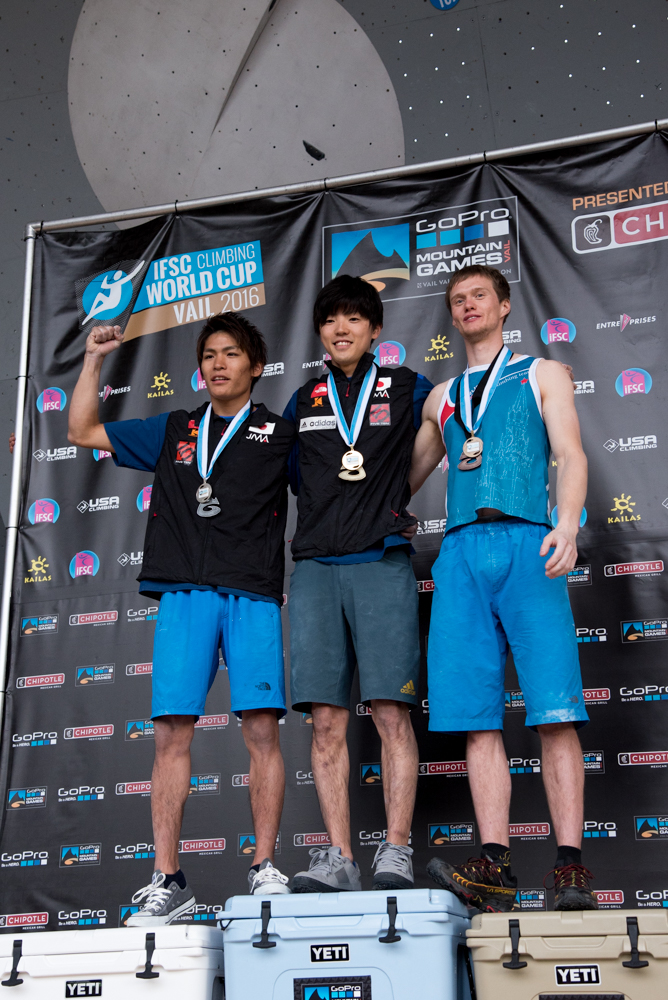 Photo courtesy of
Logan Robertson Photography/GoPro Mountain Games.Team U.S.A., on home turf, had an unusually large turnout of climbers with 18 female and 19 male competitors in Vail. Along with Mascarenas and Puccio, Kyra Condie, Margo Hayes and Sierra Blair-Coyle qualified for semi-finals. Condieplaced 11 overall, Hayes 15 and Blair-Coyle 16.

Hanna, apparently not too tired after a tough qualification round, won Rock and Ice’s pull-up competition afterwards with 53 pull-ups.

The next and last IFSC Bouldering World Cup of the season will take place on August 12 and 13 in Munich, Germany, but before then, the lead climbing world
cup season will kick off in Chamonix, France on July 11 and 12.

Watch the Highlights from Finals here: