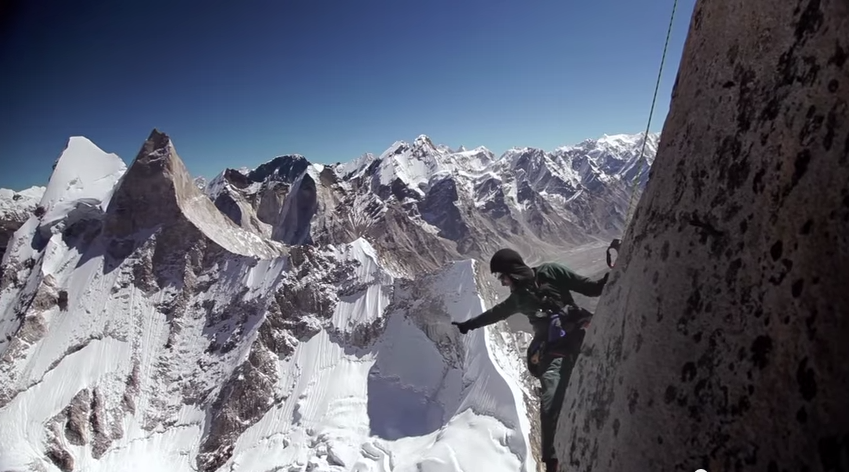 The film Meru – which chronicles the first successful ascent of the Shark’s Fin on Meru Central by climbers Conrad Anker, Jimmy Chin, and Renan Ozturk – will premiere in theaters in the United States beginning August 14th.

“This is the anti-Everest,” says Into Thin Air author Jon Krakauer in the film’s trailer, “It’s the test of the master-climber.”

Anker, Chin, and Ozturk’s efforts to meet that test – a high altitude alpine climb capped by a 1,500 foot big wall of blank, overhanging granite – propel the plot of Meru codirected by Chin and his wife, documentary filmmaker Chai Vasarhelyi.

“The reason Meru is different is that on Everest you can climb it with a lot of support. You have Sherpa support,” says Vasarhelyi, in remarks to Park City Television. While on Meru, “it was just the three guys on the mountain.”

The Shark’s Fin on Meru Central (20,700 feet) slices skyward at the headwaters of the Ganges River in Northern India.

Many thought ascent to be impossible. In fact, the Shark’s Fin has been the site of a higher number of failed ascents than any other Himalayan peak in the last three decades. 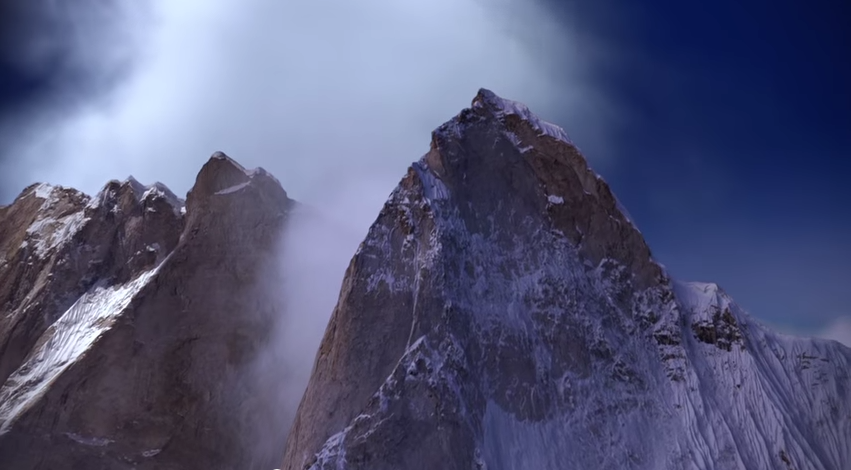 The name of the peak itself is imbued with cosmological overtones.

Meru names the sacred mountain in Buddhist, Hindu, and Jain cosmology that marks the epicenter of both the physical and metaphysical universes.

Its Himalayan namesake seems to have occupied a similar interior topography for Anker, Chin, and Ozturk.

The singular challenge posed by a first ascent of the Shark’s Fin became a haunting quest for each of them. For Anker in particular, the climb was a means of fulfilling the vision of his own mentor Mugs Stump.

The team first attempted the climb in October 2008, yet what was intended to be, as the filmmakers describe, “a seven-day trip with the equivalent amount of food became a 20-day odyssey in sub-zero temperatures, thanks to the setback of a massive storm that showered the mountain with at least 10 feet of snow.”

Unfortunately, this required the team to abandon their push just one hundred heartbreaking meters away from the summit.

Anker successfully convinced Chin and Ozturk to return in September 2011.

Meru tells the story of what happens next. And it is already attracting the attention of an audience far beyond just the climbing community.

The film won the Audience Award at the 2015 Sundance Film Festival for U.S. Documentaries – which could be a harbinger of even more acclaim to come – as other recipients of this honor have later received Academy Award nominations. 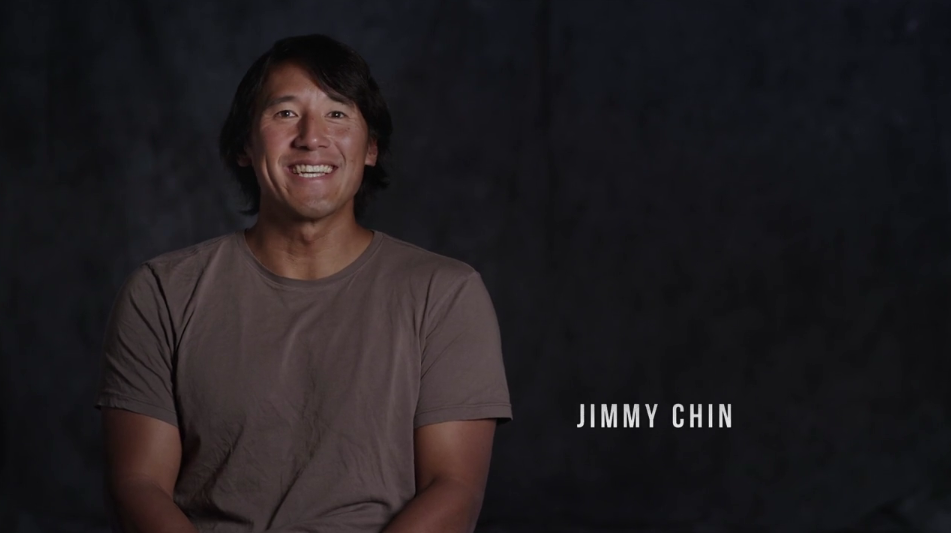 “I have always felt a certain level of ambivalence towards climbing in the big mountains,” says codirector Jimmy Chin in a recent blog post.

“In making Meru, our hope was not just to give people a visceral experience of modern, cutting edge ‘mountain climbing,’ but more importantly, an honest look at the life, the loss, the elation and ultimately, the intractable decisions faced by people who’ve made a life of climbing high altitude alpine peaks…The process may have only deepened my ambivalence. Love or hate? Freedom or incarceration? I don’t have the answer but I am proud and grateful to share a film…that will hopefully open your eyes to another world and let you decide for yourself which side of the ridge to stand on.”

For further information and showtimes see below, or visit www.MeruFilm.com.

Patrick McCormick is a visiting scholar at the University of Notre Dame. His writing on human rights and multilateral affairs has been published by a range of outlets including CNN, Ethics and International Affairs, The St. Louis Post-Dispatch, The Georgetown Journal of International Affairs, and the Council on Foreign Relations.