With colder temps finally hitting the East Coast, Michaela Kiersch grabbed the Golden Ticket (5.14c) at the Chocolate Factory,
Red River Gorge, Kentucky. She redpointed the route this Sunday for its first known female ascent, and her third 5.14c. 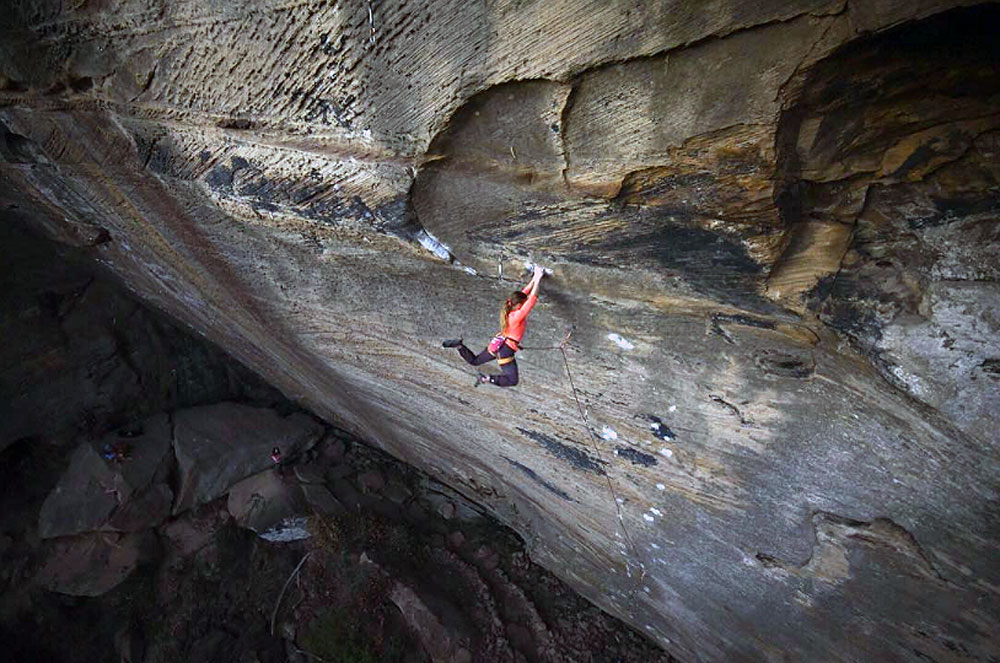 @andywickstrom.” title=”Michaela Kiersch sticks the dyno on Golden Ticket (5.14c), Red River Gorge, Kentucky. Photo: Andy Wickstrom / @andywickstrom.”>“Very proud of myself considering it is the epitome of my anti-style,” Kiersch told Rock and Ice.
“Obviously big moves have posed as a major challenge for me my entire life.” Kiersch, who is 5 feet 1 inch tall, considers big moves to be her greatest
weakness. “This route is notoriously ‘reachy,’” she says, “and I am psyched that I was able to climb outside of my comfort zone.”

Golden Ticket was equipped by Kenny Barker in 2007 and first climbed by Adam Taylor in 2009. The route is widely considered to be one of the best,
and hardest, in the Red.

Kiersch, who lives in Chicago, Illinois, estimates that she tried the route over four or five weekends this season. “But this was the first proper fall
weekend,” she says. “The last time I was on it was 80 degrees!” Not to mention, she was also wearing a Superwoman Halloween costume that weekend. Nonetheless,
she flashed Atomic Fireball (5.13d) and reached a highpoint on Golden Ticket, sticking the dyno from the ground for the first time.

After a weekend away from the Red, to compete in the ProLo bouldering competition in Utah—where she placed second, behind Alex Puccio—Kiersch returned to “proper fall” and was able to send.

Last month, she climbed Lucifer (5.14c),
at the Purgatory, and this spring, she sent Thanatopsis and Pure Imagination in one weekend at the RRG—her first 5.14b and first 5.14c ascents.

About Golden Ticket, Kiersch says, “Definitely my best accomplishment in my climbing career.”

Happy Halloween! ???It was a “super” weekend in the Gorge! I managed a flash of Atomic Fireball (5.13d/8b) ?and a new high point on my project– sticking the dyno seen here! And yes… I did it in a cape!!! I was ?SWEATING ?in that thing. The material was not very breathable surprisingly ?and the 80 degree weather didn’t help. Photo: @andywickstrom Thanks for the awesome catches @rockynclimbs and for the support @eggtravels. . . . #climbing #superwoman #superhero #halloween #redrivergorge #rockclimbing #girlswhoclimb #fitness #flying #petzlgram #adidasoutdoor #fiveten #obstaclecourse #anw