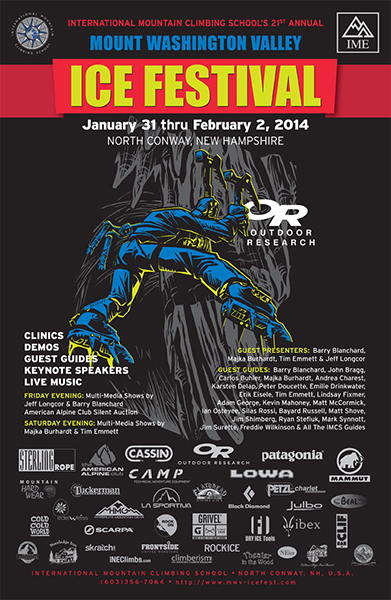 From January 31st to February 2nd, the Mount Washington Valley Ice Fest celebrates its 21st birthday this year with a bang. With three full days of clinics taught by internationally renowned guides and presenters like Tim Emmett, Barry Blanchard, Emilie Drinkwater, Adam George, Kevin Mahoney, Bayard Russell, Freddie Wilkinson, Majka Burhardt, Peter Doucette, Mark Synnott, Matt Shove and a host of others, climbers of all ability levels can hone their technique one some of the best ice terrain in the country. In addition to the guest guide roster, the high caliber local guides at International Mountain Climbing School will be guiding throughout the weekend as well. And with demo gear from companies like Outdoor Research, Lowa, La Sportiva, Julbo, CAMP, Mountain Hardwear, Mammut, Patagonia, Petzl, and Sterling, you can climb in style. All clinics and demos are hosted in town by the historic local climbing shop, IME in downtown North Conway, NH.

Friday and Saturday’s climbing is followed by slideshows and rowdy live entertainment at Theater In The Wood, North Conway, NH. Friday’s American Alpine Club Night benefits the AAC’s awesome Live Your Dream Grant and kicks off the evening festivities with slideshows by LYD Grant-Winner Jeff Longcor and the legendary Canadian Alpinist Barry Blanchard. Beer sponsor Tuckerman Brewery, the Big Love Burrito Truck, and a live DJ will keep things going on both Friday and Saturday evening.

Saturday evening, local ice mutant Majka Burhardt presents on living and climbing in New Hampshire, and British climbing polymath Tim Emmett will have you rolling with laughter as he covers his amazing ice and mixed ascents around the world. To wrap up the festivities, local band Rek’lis will rock it into the night!

All reasons that the oldest Ice Fest in the country is one of the funnest weekends around! Don’t miss it and see you there! All details can be seen at: www.mwv-icefest.com