Canadian climber Nathan Kutcher has established what is likely the hardest mixed route in Alaska and a contender
for the most difficult mixed climb in North America. His new route, Contra, ascends a near featureless, overhanging rock face in Keystone
Canyon outside of Valdez. 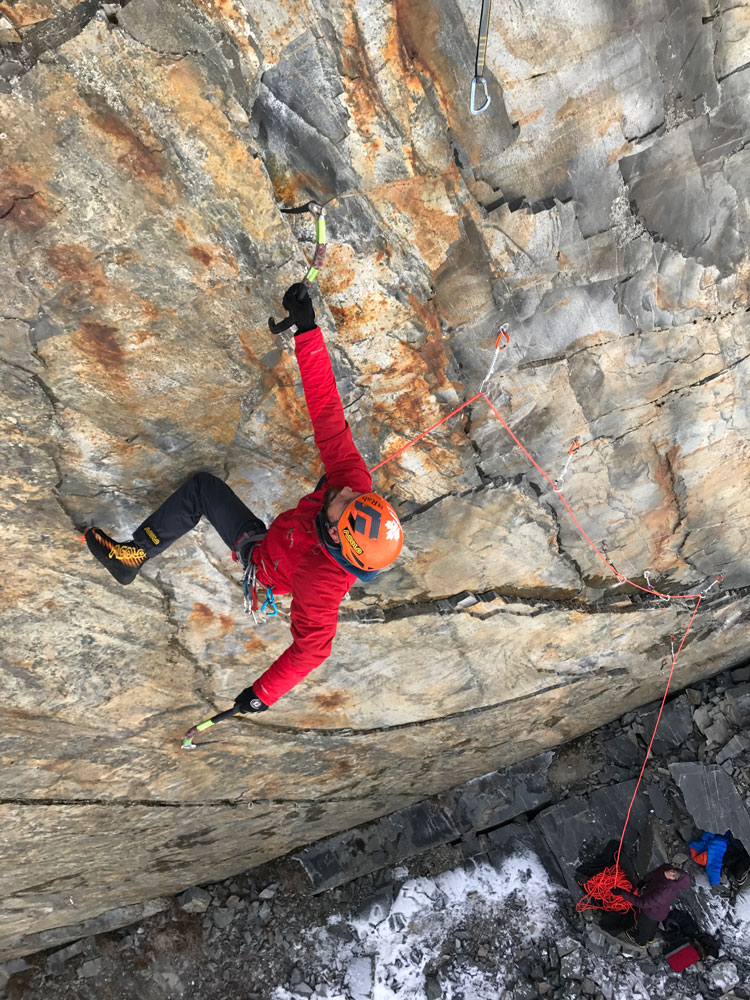 “When I clipped the chains there was no big celebration. I was too physically and mentally drained from fighting to keep things together,” Kutcher tells Rock and Ice. “I was physically wrecked for a few days after.”

According to Kutcher, Contra holds its own against Saphira (M15-) in Vail, Colorado—a
route widely considered to be the hardest mixed climb in North America—even though Kutcher suggested the humble grade of M13- for Contra.

“It ended up being a lot harder than I thought!” he says.

The allure of new lines, and the Valdez Ice Climbing Festival, brought Kutcher and
his climbing counterpart, Rebecca Lewis, to the small seaside city of Valdez. The Canadians had planned on a different objective, but when the weather
turned—and led to the cancelation of the festival’s climbing events—Kutcher
and Lewis looked for new options. They were happily suprised by what they found.

“Before we came to Valdez we never expected to find something steep like this wall,” Kutcher says.

Over the week, they envisioned, cleaned and bolted two side-by-side dry tooling routes (Kutcher still refers to them as mixed climbs) on the wall—Contra and
Flake It Till You Make It (M11). Rock and Ice caught up with Kutcher to learn more about the climbs.

What brought you up to Valdez, Alaska?

I’ve always wanted to check out the climbing around Valdez, but it seemed like a long way to go. Lee Hart invited Rebecca [Lewis] up for the Valdez Ice
Fest, which gave us more incentive. Looking at photos and talking with a local climber sealed the deal.

I was really excited to go up and try to climb some new mixed routes on the days we weren’t teaching clinics [for the ice festival].

How did you find Contra and why did you choose that particular line?

Going to Valdez, I had hoped to climb new multipitch routes on the bigger walls in the area, but the rain, melting river, and high avalanche conditions made
us look for new options.

I picked this line because it was a faint weakness of thin seams and overlaps up the center of the wall. There were a few continuous seams, as well as
a couple of harder-to-see lines that I also briefly looked at. This one seemed like it would be hard, but not too hard. It ended up being a lot harder
than I thought! 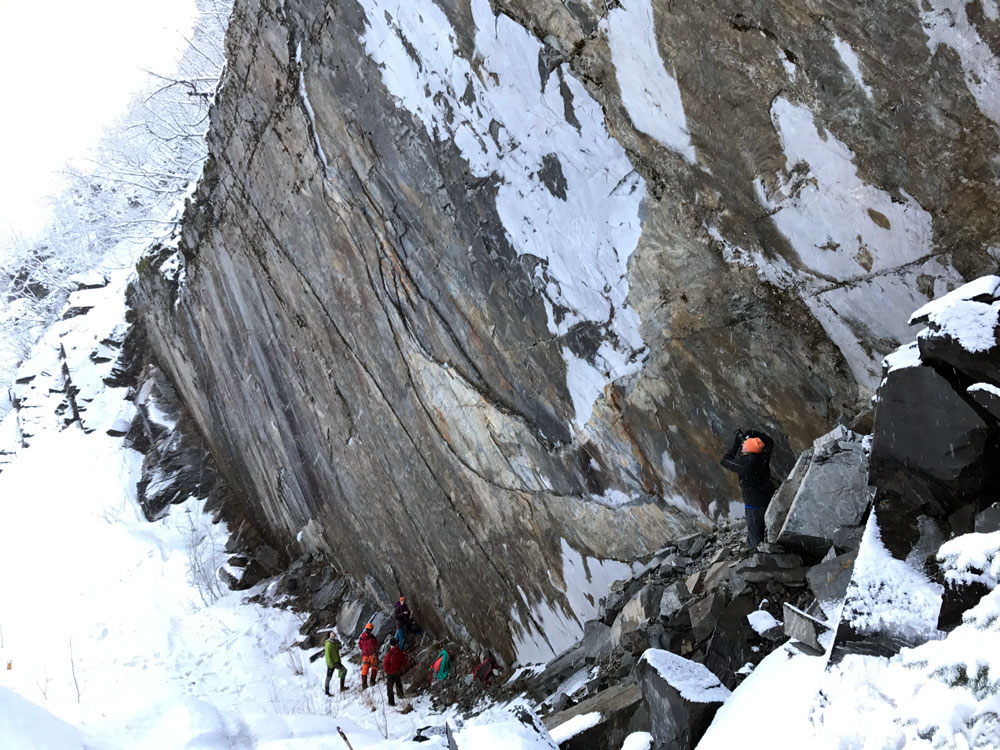 The wall is about 20-meters tall and around 25 to 30 degrees overhanging. Most of the weaknesses in the rock diagonal right to left up the wall. Other
than the fracture lines, it has very few features. The diagonal nature of the seams and a lack of features on the face make for generally terrible
footholds. The rock is some sort of slate or shale, and it’s very hard and slippery. It is also somewhat friable, but mostly solid.

The overall climbing style is technical power climbing with bad feet. Most of the holds are three to six feet apart with bad or no feet, and most of them
are rather small and technical. Some require sideways pulling and body tension. Because the wall is not very steep, figure-4ing is somewhat awkward
and you can’t just swing from hold to hold with a long sequence of fig-4/9’s.

It’s hard to say Contra was fun because the moves are so difficult and insecure. I always felt like my tool was going to pop off and I was going
to take an out-of-control fall. I guess hard routes are usually ‘Type 2’ fun. Looking back, they were all really fun.

What was the crux for you?

There is a technical crux and a redpoint crux. The technical crux is about two-thirds the way up at a deadpoint to a small accuracy-dependent hold just
out of reach. There are no footholds there, so for me it involved smearing my lower crampon on the smooth rock to push myself as high as possible on
a figure-4. The redpoint crux at the end isn’t particularly difficult, but involves long pulls after your biceps are fried.

What do you think the grade is?

I’m not sure what the grade is. I feel like there should be some sort of mathematical formula for calculating M-Grades!

Move for move, I think Contra is the hardest route I have climbed on rock with tools. But it is short and I know I can climb something harder.
There were one or two moves that were near the limit of my reach, but I think I could go further. I just need more core tension and endurance.

I rated Contra M13-. I hope someone will come repeat it and put in his or her opinion. It’s not like anything I’ve climbed in high-end outdoor
drytooling. 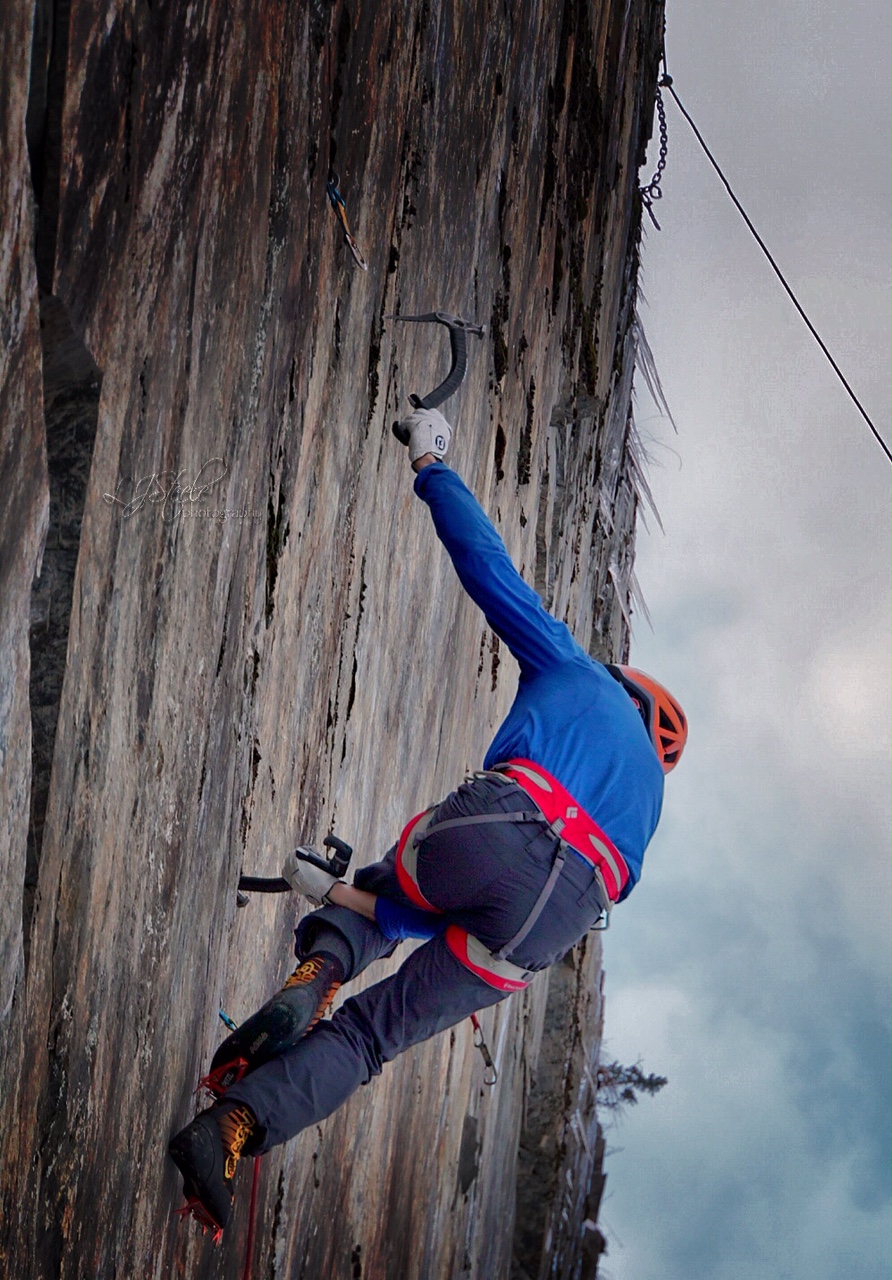 I recently repeated Saphira at Vail. It’s a hard route and could possibly be the most difficult in the U.S., but I don’t think that it’s (and several other high end routes at Vail) anywhere near its proposed [M15-] grade.

Saphira took me five tries over two and a half days. Two of the days and three of the tries were spent finding holds. The day I sent Saphira I dropped a tool right after starting into the reverse Mustang section. I lowered off, pulled the rope, started over and sent it.

I think Contra took me five tries over three days, and I knew where most of the holds were. Even though the styles of climbing are very different
I think the routes are similar in difficulty overall.

Where do you think the sport of dry tooling is heading?

Some people have said that hard dry tooling outside is dead. They could be right, but I think that “hard” routes need to be looked at from a new perspective.
Hanging on forever through bigger and bigger roofs doesn’t make routes harder when you always have a jug to hold onto. Horizontal rock is also not
that difficult to climb compared to something not as horizontal—think about swinging across monkey bars and how much more difficult it would
be at a 45-degree angle.

I’m really excited about this cliff, and the cliffs we found on the Bay of Fundy that have dense rock that is steep, but not horizontal.

Rebecca put in an amazing effort the last day we were there. She gave two solid redpoint burns and fell off the second to last move on her second redpoint
attempt. If she had a day or two for rest and another attempt she would have sent it for sure.

I climbed it with her blessing so it would be finished, just in case we didn’t get back next year. We also wanted to try to get a better idea of how difficult
it is. 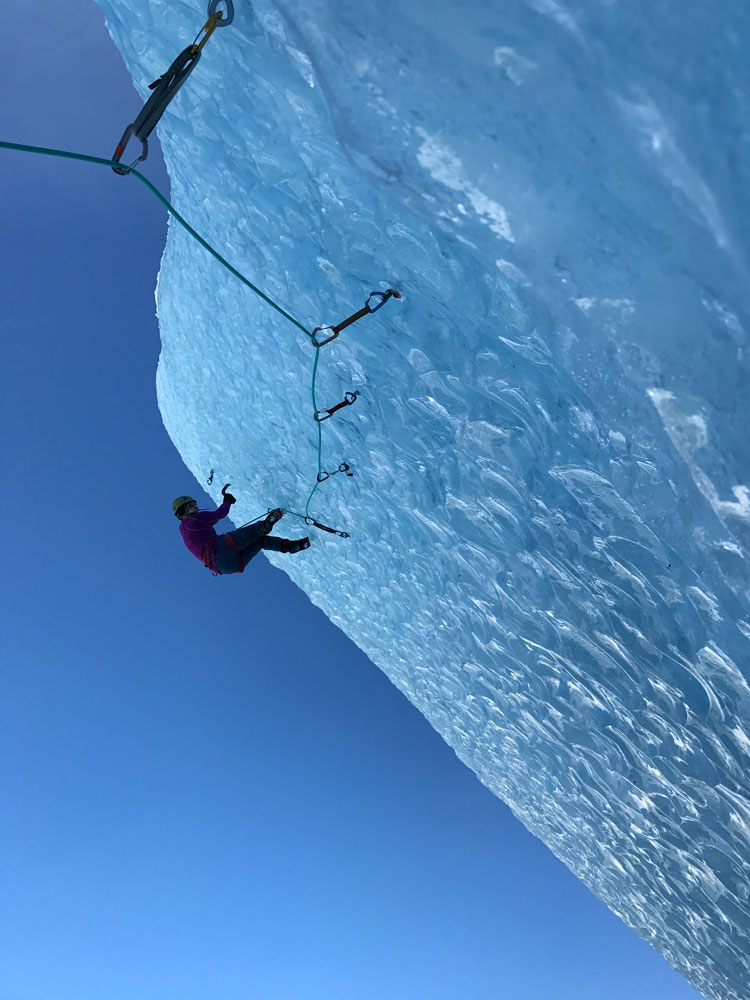 In the end I think of it as her route. She envisioned it, she cleaned it and she did the majority of the bolting. With sport climbing, I think it’s mostly a matter of semantics who the first person to send a route is, unless it’s a groundbreaking
ascent. But without the hard work of the equipper, a sport route doesn’t exist.

She named it, Flake It Till You Make It, and we graded it M11.

What’s next for you? Trips, projects, events?

Rebecca and I are organizing the Great Lakes Mixed Competition in Fenton, Michigan on March 11. We have a few crushers coming out, but this year it’s geared more towards people who have never tried competitions or even mixed climbing.

We want to show that comps can be fun, and hopefully start building a larger base of people who are into competitive dry tooling. After that we will probably
switch back to rock climbing.

Do you think you’ll ever return to Valdez?

Yes! I would like to come back next year if I have the time. There is a pile of established routes I’d like to climb and a lot of potential for new routes.