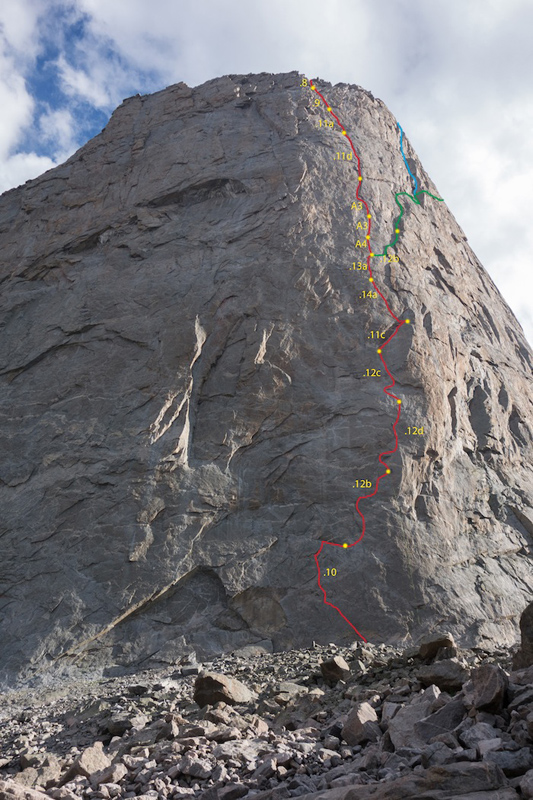 Nik Berry, Mason Earle and David Allfrey journeyed into the Wind River Range of Wyoming with one goal in mind. “We wanted the King Line!” says Berry. Setting their sights on Mt. Hooker, a 12,550-foot granite monolith that yielded the first grade VI climb in the U.S. outside of Yosemite, Berry, Earle and Allfrey scoped the north face and found what they believed to be the “most continuously blank and steep part of the wall,” says Berry. The only problem, however, was that all three climbers had forgotten a topo map of the wall and therefore had no idea if the line they envisioned had been climbed previously.

Undeterred, the team set off up the wall, using A4 aid on blank sections and free climbing easier terrain for the first 600 feet. “After thinking we were on a new line and then finding a bolt many times over we used our ‘phone a friend card,'” says Berry. Allfrey’s girlfriend researched the wall from home and then informed the team that they were actually 600 feet up Steve Quinlan’s 1980 solo testpiece Sendero Luminoso (VI 5.10 A4). “When we heard this we were all bummed, but the free climbing was so good we were very happy to continue up the line,” says Berry. The team then went to work figuring out the best way to free climb the previously aided pitches of the route. “We bolted a two pitch variation to the aid line on the 3rd and 4th pitch,” Berry explains. “Dave lead the 3rd pitch at 5.12d and I lead the 4th pitch at 5.12c.” After another corner pitch of 5.11c, an A3 seam that Berry describes as “breath taking” arced upwards. Free climbing this “A3 beauty” as the team dubbed the pitch, became the crux of the route. 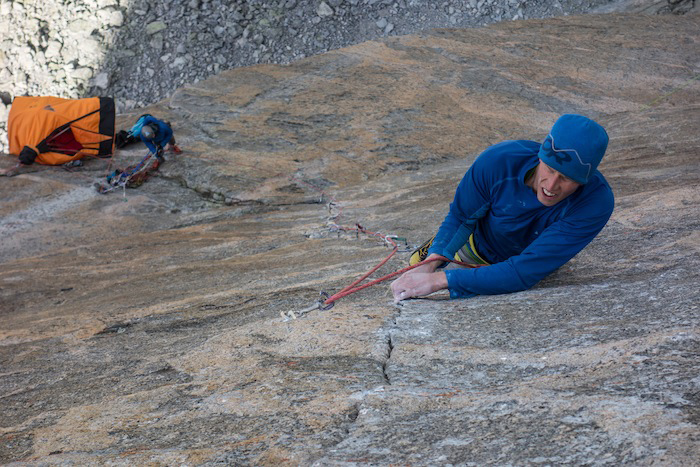 In an e-mail to Rock and Ice, Berry describes this pitch as “very crimpy and technical climbing that required insane amounts of body tention and using horrible feet.” Fixing lines from their portaledge to this crux pitch, he and Earle spent several days jugging up and then trying to decipher the cryptic crack. While resting, the climbers spent time “on the portaledge blasting music and trying to stay warm,” says Berry. The erratic weather of the Wind Rivers created difficult climbing conditions, with sporadic thunderstorms slowing progress on the crux pitch. However, Berry eventually seized a brief weather window and managed to link the pitch, suggesting a grade of 5.14a. “Sending this pitch gave me more satisfaction than any pitch I have done before,” says Berry. “After completing the pitch I also knew we would have a team send which felt terrific!” But the difficulties weren’t over yet. The very next pitch was a seam that was difficult to protect. Earle took over the lead, free climbing the seam at 5.13a, using equalized bird beaks as protection. “They were good beaks, but being beaks it warrants an R rating,” says Berry. 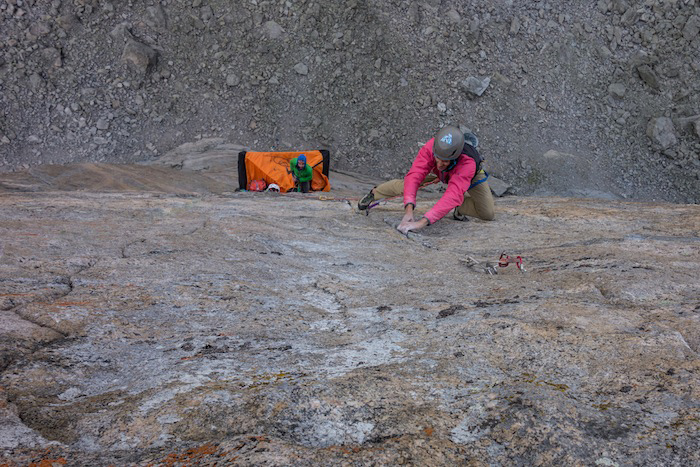 After the 5.13a pitch, the team traversed into Shady Lady (VI 5.11 A4, Bradshaw-Dockery, 1978), an already existing free route located on the right side of Mt. Hooker’s north face. The team freed the remaining climbing to the summit at 5.12 but “got way off route,” says Berry. “We did still free it though, but for future ascents it would be more pleasant to follow the route.”

The team also returned to finish aiding Sendero Luminoso, which Berry suspects is a second ascent of the route. “I would be shocked if someone else had been up there with the state of the rusted out bolts,” he says. “We were pretty sure that someone would have replaced them if they were up there since hauling off them was out of the question.” Berry also mentions that the top pitches of Luminoso were definitely free climbable. “The top would not be more difficult than what we had already climbed, but it would have required more bolting and we did not have any time left,” he says. Regardless, the team’s new free-ascent link-up is now one of the most difficult alpine multi-pitch routes in North America. “We are going back next year to do it in a continuous ascent,” says Berry. 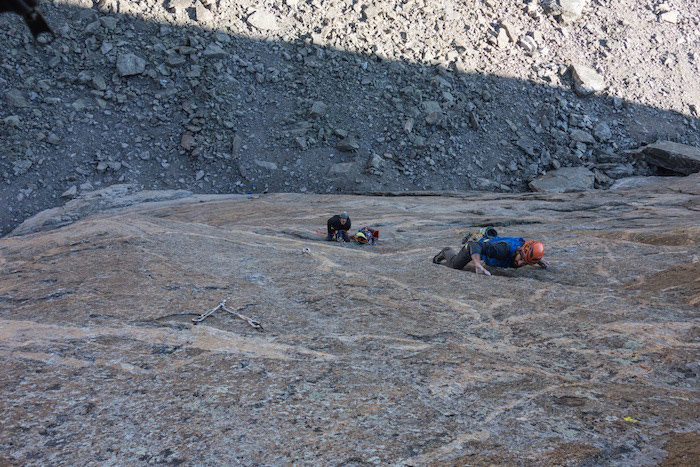