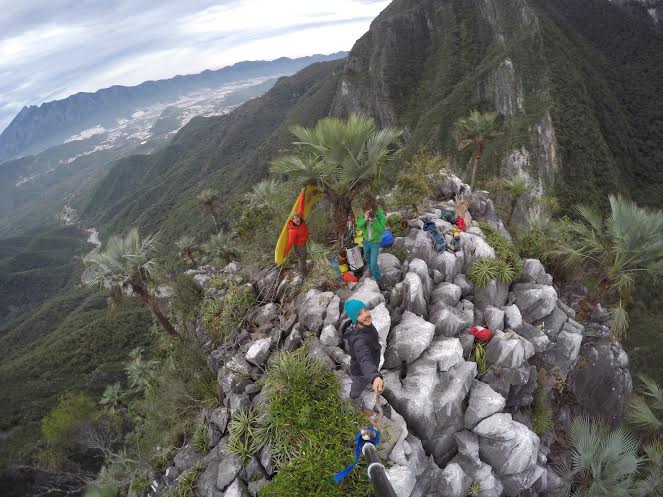 Leah was invited to check out El Diente in 2014 by a group of local developers, and was drawn to its “distinct shape, semi-remote location and lack of
routes on its striking north face,” he tells Rock and Ice. “I knew immediately that I wanted to make a route here.”

Leah returned to El Diente in November 2015 with Octavio “Ocho” Aragon and Sergio “Tiny” Almada – a veteran big wall climber from Chihuahua who made the
first ascent of son El Gigante in Basaseachi – to begin work on the new route.

The three climbers would spend up to five days on the wall at a time before returning to the ground to recharge drill batteries. 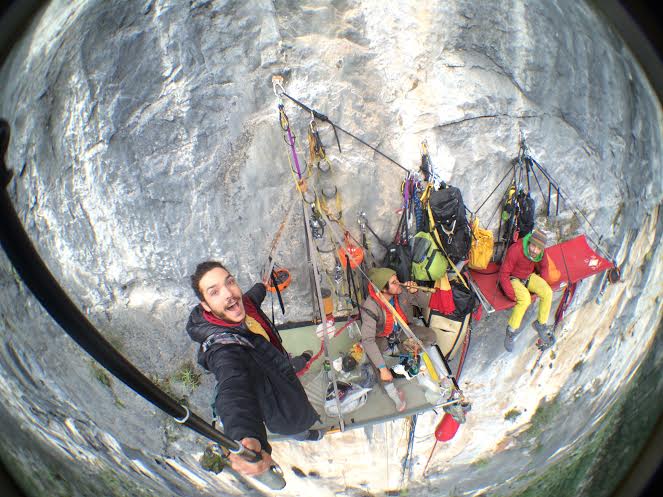 Once bolted, it took Leah, Tiny, and Ocho two days to climb the new line. “The climb itself takes a more or less direct line from the base
to the summit, tackling many of the distinct features the wall offers including a number of steep roofs and tufa sections,” says Leah.

The wall itself is steeped in climbing history. The many walls surrounding El Diente hold the first routes ever bolted within Mexico,
and climbers have long-since visited the area to climb the legendary limestone.

Ever since the 1960’s, teams of Mexican climbers dedicated their lives to the ascent of El Diente, attacking the challenging wall with old-school equipment
and techniques. A cross can be found at pitch seven of the climb, in commemoration of the climbers who lost their lives in their attempt climb the
wall.

The first ascent of El Diente came in 1962 with the Sierra Nevada Club. A team of climbers, including local climbing legends Miguel Angel Villareal Garcia,
Dionicio Rodriguez Durón, Rogelio Trevińo Manriquez, Adolfo Flores, Humbero Pérez, and Genaro Matamoro, were the first to stand on the summit of the
cliff.

Leah, Tiny, and Ocho found the aged gear of past teams as they made their ascent of El Diente, remaining on the wall as tribute to the climber who came
before them – “true visionaries, generations ahead of their time,” Leah says.

Congratulations to Leah, Tiny, and Ocho for their successful ascent. A complete route description by Leah is provided below: 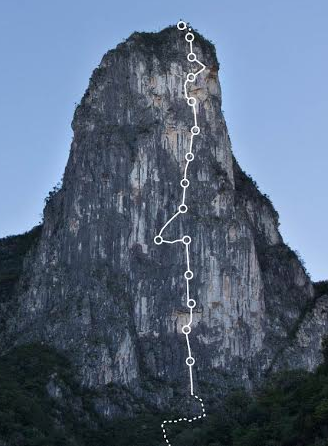 Climb the blocky slab to a wide crack that leads to a good ledge.

A steepening slab that has some great moves through its first dihedral. Above, move through crimps to a belay below the roof.

The crux pitch of the route that can be easily skipped via some A0. Climb out right to the roof where you get 3D with some amazing tufas to a sharp
and crimpy top out.

Traverse out left to some good but sharp holds and move up the small tufas to a belay below a small roof. Pumpy!

Climb the small roof into easier ground through rain pockets. Move into the big black tufa, finishing at its top.

Traverse left into the dihedral via tricky footwork and neat laybacks near the giant foot ledge.

Head up and right into the dihedral, battling small stemming sections through the continuing small roofs to a belay at a cross and tribute to a fallen
climber.

Scramble across the ledge and up the face, pushing into the slab as the arête begins. (Some vegetation) Finish at a stance on a good ledge.

Climb up into the corner and battle the small roof on its right side (crux) Move up the easy slab to the chains. Some blocks move slightly but the
pitch is mostly solid.

A perfect fist crack that moves out right near the end and finishes on a ledge below a roof.

Pull the roof on its right side (crux) and move onto the slab for some technical climbing through side pulls and good edges.

Delicately move left from the belay, making progress into the large tufa corner. Climb up to the giant hanging tufa that rings hard and move past to
its right into yet more amazing tufa. Move up into the corner through perm draws to the chains.

Traverse out right under roof to a series of amazing tufas that almost feel manufactured. Exit the roof through technical moves.

Climb the technical face through a number of good side pulls. Move out right near the 3rd bolt and make easier movement back left and to the chains.

Leah is the a climber, writer, and mentor at Escalando Fronteras, working to help at-risk youth ‘through the medium of rock climbing.’ Check out Leah’s blog to learn more.