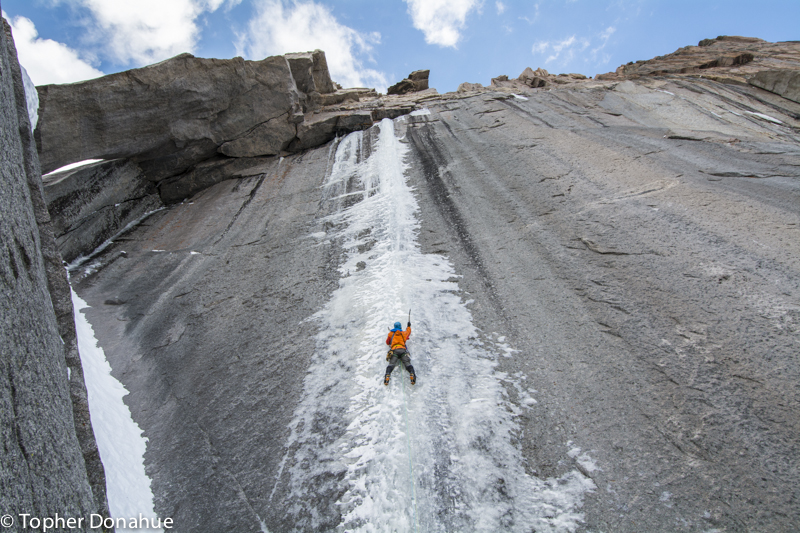 Ice climbing season has arrived in the high country of the Front Range, Colorado, and one pair of climbers has already established a new route high in Rocky Mountain National Park.

Last Friday, Kevin Cooper and Topher Donahue made the first ascent of Window Pain (WI 6+) on the Diamond, the classic east face of Longs Peak, according to Donahue’s blog. The climb ascends a thin smear of ice on the left-hand side of the Diamond and is rarely in good conditions.

“Before climate change it [Window Pain] probably was climbable once every 5-10 years. The Smear of Fear [a classic Longs Peak route, WI 6- M6] used to come in about every other year, but this year was the first in the last 5 that the Smear formed. But with wild weather events those climbs might come in more often, or less,” Donahue told Rock and Ice in an e-mail exchange.

In order to get to the base of Window Pain, Cooper and Donahue had to ascend six pitches of mixed climbing, including Field’s Chimney (WI 5 M6+) and The Window (WI 4+ M4). Because Window Pain is partially invisible from the ground, the team was unsure whether or not the smear would be fully in.

“It’s hard to know it’s there as you can only see the upper half until you get right to the base,” Donahue wrote to Rock and Ice. By the time the pair reached a belay ramp beneath the spear, however, they found good conditions for a first ascent, and Cooper prepared himself for the difficult lead at high altitude, according to Donahue’s blog.

“Seems like the crux is keeping it together for that much relentless vertical ice at almost 14,000 feet. Kevin did a great job of being patient on lead to avoid redlining it too hard and melting off his tools. It was an awesome lead,” Donahue wrote.

Previously, Donahue and Cooper had teamed up to climb Smear of Fear in late September, and it was Donahue’s first ice climb in three years, according to his blog.

“It was a lot of fun to go big in the alpine again. I’ve been rock climbing a lot, so the movement and balance were not too rusty, and I first climbed Longs Peak’s north face in thin ice conditions wearing crampons when I was 7 years old, so it came back pretty quickly,” he wrote to Rock and Ice.

The ascent marks an auspicious beginning to what many are saying will be a fat ice year. With abnormal rain fall and saturated mountain terrain, the year is sure to provide ample opportunity for first ascents. Donahue seemed to agree and wrote in closing:

“I used to think I missed the golden age of first ascents, but now I know that’s not true. There are always more new lines to be found, and ice is an exciting medium. With the extreme weather we’ve been having, I think ice climbers are going to be in for some epic new lines (interspersed with brutal droughts).”

Be sure to check out Topher Donahue’s website and blog here for more information and additional photos.