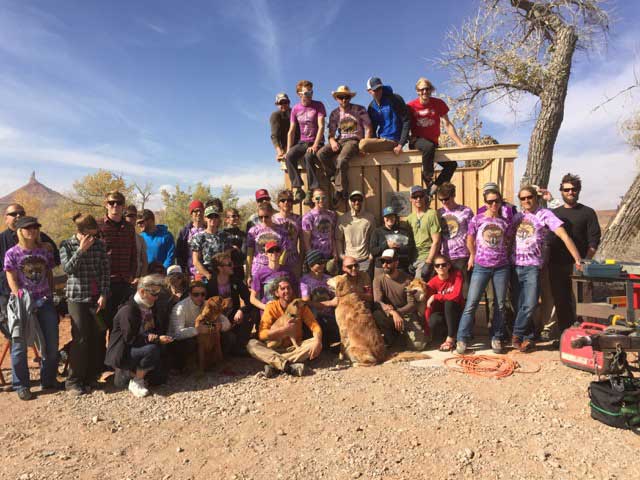 “The goal was to create something long-lasting in K-Bone’s name and honor at his most favorite climbing area on earth, ” says Black Diamond’s Director of Climbing Kolin Powick.

Kevin Volkening, or “K-Bone ” as he was affectionately called by friends, was a 25-year-old engineer working at Black Diamond when he was tragically killed in a climbing accident in Clark’s Fork, Wyoming, August 30, 2013.

After nine months of planning and working with the Access Fund, Friends of Indian Creek and the BLM, friends and family of Volkening met at his favorite climbing area, Indian Creek, on October 31, and set to work on a project that “K-Bone would be proud of, ” says Powick.

Over 40 volunteers from all over the western US showed up and set to work on Saturday. The result?

“We ended up with the most unique and special outhouse anyone could have ever imagined, ” says Powick.

The new outhouse is located in the Creek’s Superbowl campground and has a plaque in memory of Volkening, which was ceremoniously installed by his sister and mother.

The crew even managed to get in a few pitches before celebrating that evening with a fajita dinner.

“It ‘s impossible to sum up this weekend with words,” says Powick. “I think [Volkening] would be proud.”