On March 24, Mingma Sherpa and his 12-member expedition team stood on the summit of Annapurna (8,091 meters; 26,545 feet)—the tenth highest and most dangerous mountain in the world. Two of those climbers wouldn’t make it back down.

Samuli Mansikka, of Finland, and Pemba Sherpa, from Sankhuwasava, Nepal, died in a fall while descending from the summit in the dark.

“Annapurna is [a] life-taking mountain,” Mingma Sherpa wrote on his expedition page. “Climbing Annapurna depends on luck and hard work.”

The goal of the expedition team—consisting of seven foreign climbers, six Nepali climbers and two cooking staff—was to find a new, safer route up the mountain.

Mingma Sherpa had seen a possible route, farther from avalanche fields, when he attempted Annapurna in 2014, and having failed to summit that year, returned this season.

The team succeeded in finding what they believe to be a safer variation up Annapurna, in terms of avalanche danger, but lost two lives during the descent.

Mingma Sherpa named the new route Rolwaling Route, after his hometown. Their ascent is the only ascent of an 8,000-meter peak so far this season.

It took [a] long time to reach the French couloirs and it was our bad luck because we already lost our calculated time but all team members wanted to continue because we were closer to summit. Going through French couloirs was not easy too. It was deep snow and stepping on such snow was very time consuming and unsteady.

So, we just kept moving. Closer to the summit, my eyes were getting watered. My aim of climbing Annapurna was getting closer and closer. Finally at around 2:50 p.m., we reached the summit.

Annapurna has been always my dream so the moment was one of the most important and happiest for me. It was [a] really nice moment because we all, 13 climbers, were on the summit and it was one of the biggest successes on Mt. Annapurna.

[After] taking pictures, we left the summit. As soon as we passed the French couloirs, Pemba moved forward continuously without saying anything. Nobody knows the reason why he went like that. Some of our members tried to call him but he didn’t listen and wait.

We followed Pemba’s footprints and continued to descend. There came [a] point where we couldn’t move forward because we felt we are lost. We tried to move down but we didn’t find [any] clues. Kazi and Nima went to find the way but couldn’t. We all were on a rope that we fixed there.

I heard Nima say Sameli fell down while coming back to [the] rope. I got shocked at that point. I looked down and saw a torch light so I thought Sameli was stuck there. Keeping Aydine and Nima Wangchhu on the rope, I went down to the light to see if he was there.

I only [found his] torch light but no Samueli or Pemba, so I came back.

I found more ice so I thought to keep everyone at that point. I was not so worried because the weather was very calm and no wind at all. I went back and I could hear Zhang Liang asking for help, which was not possible. They were thinking we could still move down so were pushing me. I looked at the watch, it was already about 1 a.m. so four hours was not a big deal in such good weather.

Everyone was silent but Liang was shouting, “We are man, don’t sleep!” and moving his legs. He didn’t sit whole the night.

At around 5 a.m., they woke me up and it was still not so clear. Everyone was looking fine so fixing the rope, Angeli went first and I stayed at last. Descending around 40 meters on rope, then team started descending on main rope.

I went back [up] again taking 200-meters of rope. I knew [Samueli and Pemba] wouldn’t be alive but I wanted to confirm it. I crossed big ice and descended but couldn’t reach the bodies because they were on the other side and crossing the middle part of couloirs means walking towards death zone. It was clear that they were already death and we could not take the bodies.

Reaching camp, I first went to Nima for tea and soup. I went to each tent and tried to find out [everyone’s] conditions. Everyone was looking good. I knew Aydine and Jingxues got frostbite on foot the previous night. Remaining people, they were looking little tired but fit and fine.

We don’t know how the night passed so soon because we were in deep sleep. I had kept [an] alarm on but unfortunately it didn’t ring or we didn’t hear and woke up at around 7 a.m. As soon as we woke up, I put on my gear and packed my belongings.

It took around an hour to reach Camp III. We were not in [a] rush, so we slowly made [our way] to Camp II. Aydine wanted to rest so we left him at Camp II with one of our Sherpa. We packed our remaining gear at Camp II and move down.

It was getting dark. When we reached the glacier closer to base camp, we lost our way. I tried to call by radio and I was told that all other members were already at base camp. We found our way and we continued. Finally at around 12:20am, we reached the base camp.

We slept like a dead and knew nothing. Early morning there came some friends from another camp to congratulate and express their heartfelt condolence. We were in sorrow, we were tired and still we wanted to rescue our casualties but it was not easy and not possible from that point. Aerial rescue was not possible to that height and getting to that area by climbing means putting more lives in danger.

Both Samueli and Pemba were the most experienced climbers from our team with more 8,000-meter peaks climbed and both had lots of experience of guiding because both of them have been working as guide and leader in Himalayas. We didn’t expect they would remain there forever. 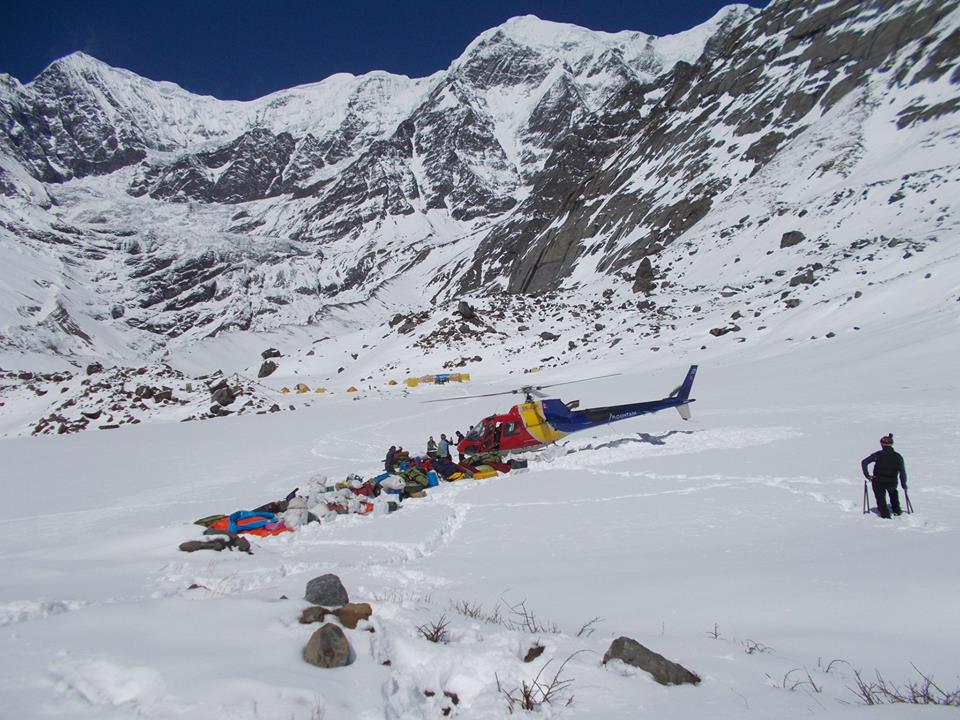 We woke up early and started packing our things. We wanted to try a helicopter rescue of the two bodies. Another helicopter with famous pilot of long line rescue team in Nepal, supported by Finland Embassy and Phil Crimpton, friend of Samueli, went up taking Nima to locate the bodies but came down. Again they went up, well equipped, but they couldn’t take out the bodies because it was beyond helicopter’s capacity. The pilot said it was not possible to take out those bodies so we thought not to try it again.

Considering many things, what I have learnt about Sammy of being a mountain lover, I don’t know what other people and his family think, but I prefer him there on mountain.