Austral summer in Patagonia has been especially poor this season, but nevertheless Siebe Vanhee and Seán Villanueva O’Driscoll took advantage of a short weather window to establish a new route, El Matédor 5.11c (6c+), 13 pitches, 500 meters, on the East Face of Aguja Desconocida in the Torres del Paine.

The Belgian duo both freed the route in a 12-hour push but were forced to follow less obvious features because of snow and ice. 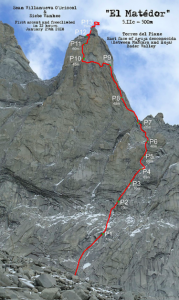 “The line we choose was the driest line we could find,” Villanueva O’Driscoll told Rock and Ice via email. “It takes the line of weakness at the bottom and then traverses left and goes straight up the headwall into some amazing cracks (the crux). As we reached the summit ridge we got blasted by the wind coming from the West, so we raced up the last 10 meters to the summit, touched the top, and hurried back to the east face and shelter. Basically we did the best we could do the with the conditions that were given to us.”

The 2017/2018 season in Patagonia has not favored climbers, with snow and ice covering many of the lines and extended periods of poor weather thwarting planned ascents.

“The day we climbed was a short window and with a lot of wind,” says Villanueva O’Driscoll, “so it was good to be in the Bader Valley where there are a lot of east faces which are protected from the mostly Westerly winds. Knowing the window was going to be short, and the rock in bad conditions we decided to go for one of the shorter formations.”

Aguja Desconocida, a tower in between La Mascara and La Hoja, was previously climbed by an Italian team, although Vanhee and Villanueva O’Driscoll didn’t know that until they came across a rusty piton at a false summit.

“At the time I thought the formation was possibly unclimbed,” Villanueva O’Driscoll told Rock and Ice, “but we found a piton just below the summit and later found out it has already been climbed by an Italian team who named it Aguja Desconocida (the Unknown Tower).”

During the remainder of their stay in Torres del Paine Vanhee and Villanueva O’Driscoll made two attempts on other towers but were turned around by adverse weather (see video below).

“Nevertheless that is part of Patagonia, it’s wild and untamed,” says Villanueva O’Driscoll. “I knew that before going there, so the advantage of not having any fixed plans is that it keeps the options open and adjustable depending on conditions. I still had a great season there and it is still a magical place.”

You can watch one of Vanhee and Villanueva O’Driscoll’s thwarted attempts to climb a new line in Torres Del Paine this year in this video by Vanhee.

For more adventurous and humorous videos, including Vertical Sailing Greenland and Venezuela Jungle Jam, from Vanhee, Villanueva O’Driscoll and friends, check out Xpedition.