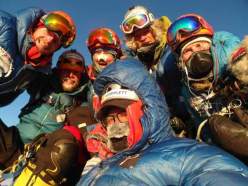 A new route on the South Ridge of Ulvetanna peak [2,931 meters] has just been established. The Norwegian team of Kjersti Eide, Espen Fadnes, Jonas Langseth, Alaskander Gamme and Ingeborg Jakobsen along with British alpinist Andy Kirkpatrick spent 12 days climbing Ulvetanna (Norwegian for the Wolf’s Tooth), which is part of the Fenriskjeften (Wolf’s Jaw) Range in Antarctica’s Queen Maud Land. The team left for the expedition this past December with the intention to ski, kite-ski, climb, BASE jump and cycle on a fatbike for 50 days. At 2:30 am on February 3 the expedition summited Ulvetanna, but was unable to BASE jump off due to an incoming storm.

“There was no jumping from the top. It was, of course, a disappointment to Espen and Kjersti, but we had a wonderful trip up and down,” Aleskander Gamme told Gamme.no, a Norwegian Expedition Website. Espen and Kjersti are both professional BASE jumpers. Valery Rozov of Russia remains the only person to have BASE jumped from Ulvetanna in 2010.

This is the fifth documented climb on Ulvetanna. The first route was established in February 1994 by Norwegian alpinists Ivar Tollefsen, Sjur Nesheim, and Robert Caspersen in an ascent of the Northwest Wall. In an article for the American Alpine Journal entitled, The Wolf Fang, 11 Days on the Northwest Wall of Ulvetanna, Tollefsen wrote, “Even amongst the kilometer-high crags and pinnacles of Fenriskjeften, Ulvetanna is in a class of its own. At 2,931 meters above sea level, it is steep and inaccessible from all sides. Three colossal 1,000-meter walls rise up from the icy floor, separated by intimidating, razor-sharp ridges. It is beautiful, frigid, virginal.”

The second ascent,via the North Face, didn’t take place until 2006 when Tollefsen and Caspersen returned with Trond Hilde and Stein-Ivar Gaudal. It took them 14 days to climb the Norweigan Route (5.10a, A2, 960m) in capsule style. In 2009 the German baddasses Alex and Thomas Huber established a new line on the Northwest Ridge with photographer Stephan Siegrist, named Eiszeit (5.10d, A4), German for Ice Age. In January 2013 Leo Houlding, Sean “Stanley” Leary, Jason Pickles, Chris Rabone and filmmaker Alastair Lee completed the longest and hardest route on Ulvetanna; The Northeast Ridge (5.12, A2, 1,750m).

The length and the grade of this latest route are still unknown at this time, but more information is expected once the climbers return home.