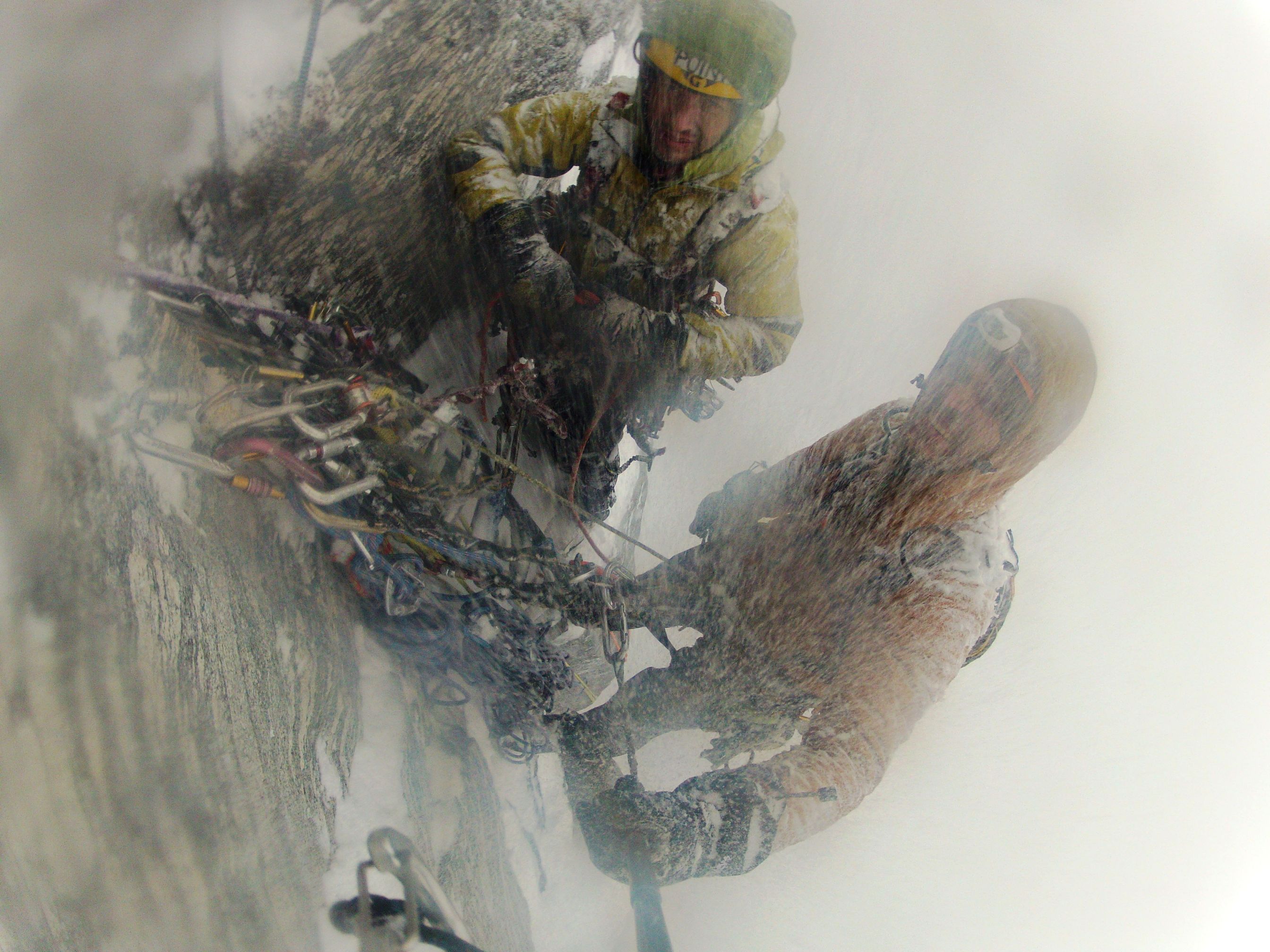 The Polish climbers Marek “Regan” Raganowicz, 54, and Marcin “Yeti” Tomaszewski, 40, braved full winter conditions—and one hurricane—on their new route Katharsis (VI, A4, M7) up the near 4,000-foot north face of Trollveggen (Troll Wall) in Romsdal, Norway. They climbed the route from January 23 to February 9.

“Troll Wall is a rather serious challenge in winter,” Regan tells Rock and Ice. “We were ready for 20 days, but obviously we climbed as fast as we could.”

The first winter ascent of the Troll Wall occurred in March of 1974 by a four-member Polish team on the French Route (VI, 5.10, A4) over 16 days. In February of 2002, the Troll Wall saw its first new route established during winter, Krasnoyarsk, by a six-person Russian team over 19 days. Katharsis is the fourth new route to be put up in winter.

The Troll Wall is notorious for bad weather and difficult climbing conditions. Located on the north face of Mt. Trollveggen, the Troll Wall is the tallest vertical rock face in Europe, at close to 4,000 feet from base to summit. It receives little sunlight, even in summer and its cracks are often filled with ice. According to bigwalls.net, the rock itself is generally not solid and the fluctuating temperatures common to the area cause regular rock fall.

Regan, who currently lives in Scotland, had visited the Troll Wall area a few times over recent years, looking for a new, direct line.

“We wanted to keep the line in the middle of the overhanging section, straight from the bottom to the top,” he says. “Simple way of thinking. I had pretty good photos and eventually I found the line.”

Route finding in winter conditions while on the wall was another story. 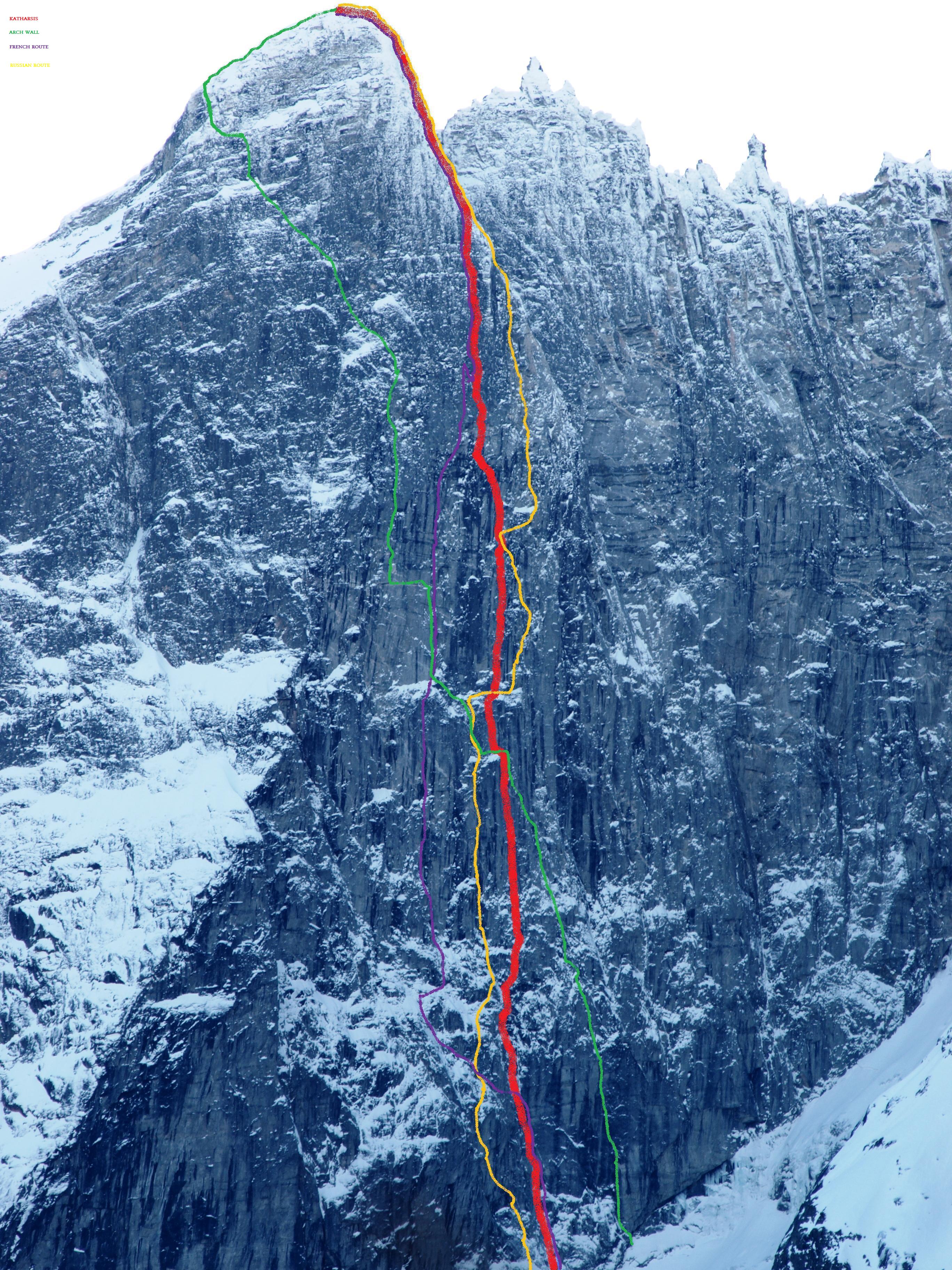 “We had to find exact features each day, which is one of most exciting aspects of trying a new route,” says Regan.

The temperature could fluctuate by as much as 50 degrees Fahrenheit in a 24-hour period, filling cracks with “pure, very hard ice,” and coating the rock under thin layers of ice. Protection was often poor or non-existent.

Regan says: “We hammered beaks in frozen turf, rotten rock and ice. Spindrifts were a nightmare. Anybody who wants to spend many days on the wall should be prepared for bivis in very wet or frozen gear.”

On their 16th day of the climb, Hurricane Ole hit, bringing heavy snow, strong winds and temps of minus 22 F.

“We would hear the wind coming, then the portaledge would jump up and down and there were flashes of lightning,” says Regan. “But we were patient enough. The next day was windy with heavy snow, so we had to take another rest day.”

The third day after the hurricane stuck, the team got up early, jugged frozen ropes to their high point and climbed four last pitches through “horrible spindrifts” to reach the top.

“That was good day,” says Regan.

Not including the four days of carrying loads into basecamp, the was climbed in a single push over 18 days, in what Regan and Marcin call “Capsule Style,” similar to how Tommy Caldwell and Kevin Jorgeson climbed the Dawn Wall. Once Regan and Marcin left the ground, they didn’t return. They would establish a camp on the wall and spend multiple days climbing the pitches above, returning to the hanging camp each night. The route was climbed in 27 pitches, with three camps interspersed, using only 19 bolts and nine rivets. 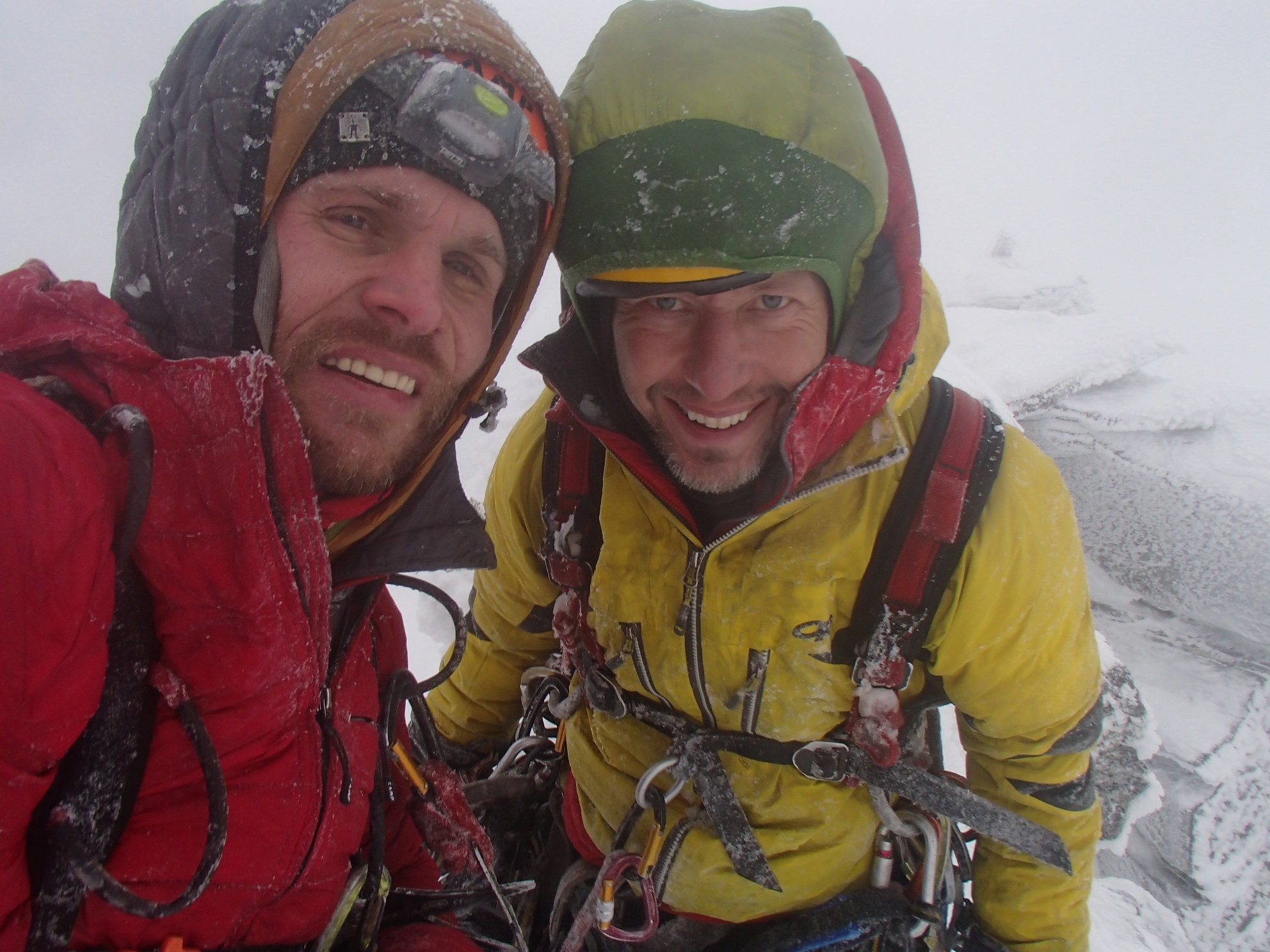 “Climbing Troll Wall as a team of two was a big challenge for us,” says Regan, “but we are happy that the conditions allowed us to do such a beautiful, natural and logical line without excessive drilling.”

Katharsis was the third time Regan and Marcin climbed together, after Superbalance on the north face of Polar Sun Spire on Baffin Island in 2012—the first time they tied into a rope together—and Bushido on Great Trango Tower in 2013.