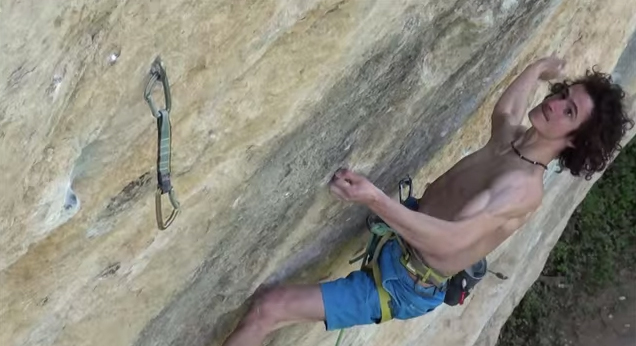 second confirmed 5.14d onsight, Adam Ondra continued his limestone rampage by climbing two 5.14ds and one 5.15a in the Basque country of Spain.

First on Ondra’s hit-list was Psikoterapia – a 5.14d established by Basque climber Patxi Usobiaga in 2004 at a crag known as Valdegovía. Ondra attempted to onsight the route (see video below) and nearly did, falling on the route’s upper crux. He was able to finish the route that same session.

Ondra then returned to Baltzola (the site of his latest 5.14d onsight) and spent two days working on the third ascent of Ini Ameriketan, which was originally graded 5.14d when first climbed in 2002 by Rikar Otegul. Despite finding “easier” beta than Otegul and Usobiaga (who repeated the route in 2003), Ondra felt that Ini Ameriketan was actually 9a+ (5.15a) and upgraded the route on his 8a.nu scorecard after sending the line on May 9. Ondra commented that the route was “harder than Il Domani [5.14d].”

The day after sending Ini Ameriketan, Ondra was back at the same crag, this time focussing his efforts on a project that was bolted by Usobiaga and up for grabs. Ondra was able to make the first ascent, naming the route Ira and giving it a grade of 9a (5.14d).

Check out the amazing footage below of Ondra attempting to onsight Psikoterapia, and then later claiming the route’s second ascent.