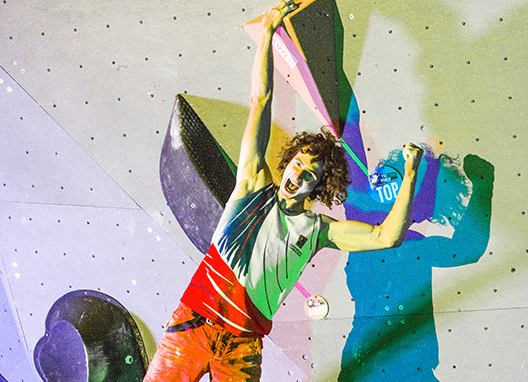 If you’re wondering why you haven’t heard about Adam Ondra sending the world’s hardest routes lately, that’s because the Czech phenom has been focusing on competition climbing. And on Saturday night, Ondra once again proved that he is the strongest by winning the 2014 IFSC Bouldering World Championships in Munich, Germany. Ondra was the only competitor to finish all four finals problems, dominating a stacked field that included Jan Hojer of Germany, Russia’s Dmitrii Sharafutdinov and Jernej Kruder of Slovenia. Kruder took silver at the Championships for his best competition result ever, and Hojer finished in third place.

The women’s finals came to a show-down between American Alex Puccio and Germany’s Juliane Wurm. Puccio, who recently became the fourth woman to climb V14 looked poised for the win. But as Wurm and Puccio entered the fourth and final round neck-and-neck, in the end, it was Wurm who clinched the victory, sending the final problem on her fifth attempt, besting Puccio’s sixth-try send. Akiyo Noguchi of Japan took the bronze.

Check out the highlights of this exciting comp in the video below.