Adam Ondra squeezed a thick, sloping stalactite and a flat volume with a double-heeled bicycle. Baring his teeth, the Czech phenomenon bumped to a large pinch above the roof, unwinded his heel from the stalactite and went again, grazing the route’s next hold.

Ondra’s victory sealed his position as the 2015 IFSC Lead World Champion, based on his combined scores from the eight Lead World Cups this season. He defended his 2014 Lead World Champion title against France’s Gautier Supper, who took second place overall, followed by Jakob Schubert in third.

As the last IFSC competition of the year, Kranj has also decided the 2015 Combined World Champions, adding up the results of athletes’ overall Lead and Bouldering scores. Adam Ondra, with his third-place standing in Bouldering and first place in Lead, won this year’s Combined title, making him Sunday’s winner of pretty much everything. Sean McColl earned the second place in Combined, followed by Domen Škofic (Slovenia) in third. 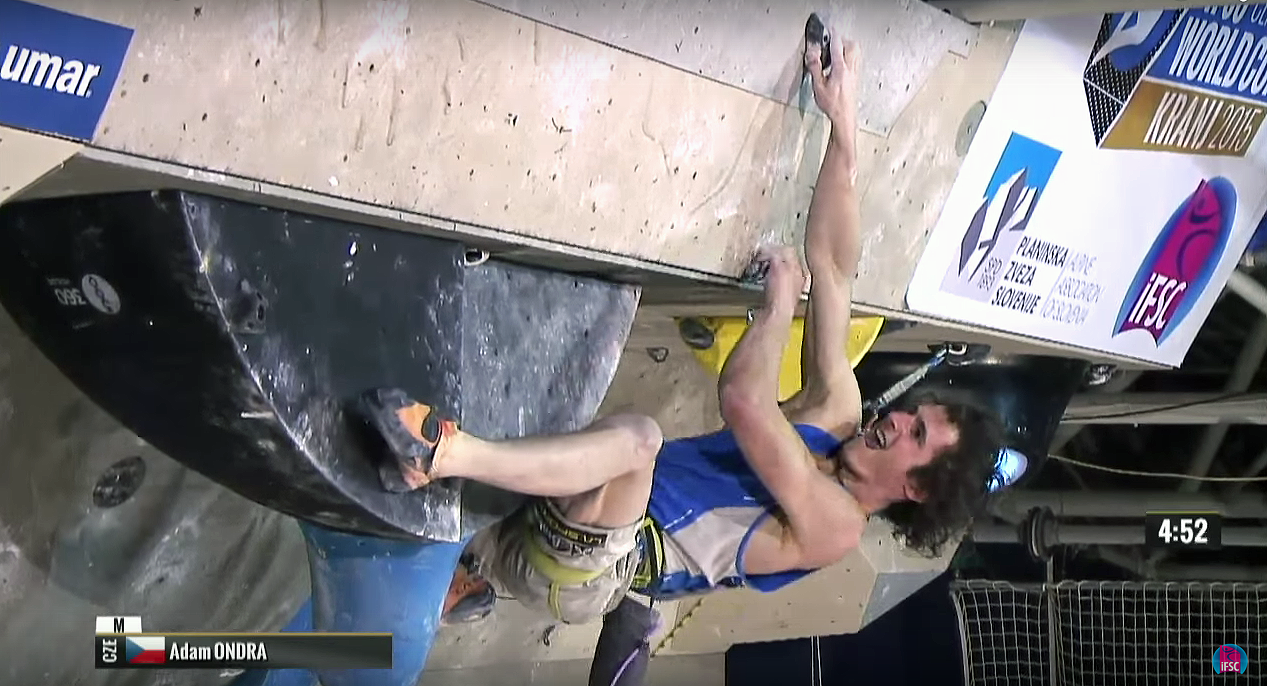 Mina Markovič, a crowd-favorite on her home turf in Slovenia,powered through a series of improbable holds—sloping pinches, triangular meathooks and negative volumes—and launched to two opposing triangles. Although she couldn’t stick the dyno, she managed to tap the route’s next hold, a performance matched only by Jessica Pilz of Austria.

“I am really happy that I was strong enough to keep my head calm, focused just on route and enjoy this final climb as I did,” Markovič posted on Facebook. “It was a pleasure to climb in front of home crowd, so big thanks to everyone for cheering and support!”

Though Pilz and Markovič tied on the final route, Markovič was crowned victor for her higher score in the qualifying rounds. Sixteen-year-old Slovenian Janja Garnbret snagged a close third, falling one move below Pilz and Markovič. Jain Kim (Korea) equaled Garnbret’s high-point in the finals, but took fourth due to her lower semi-finals score.

Markovič’s latest victory won her the title of 2015 IFSC Lead World Champion, beating out her rival and three-time World Champion Kim, who took second place overall. Kim and Markovič have juggled the World Champion title since 2010—both women have won three first-place titles and three second-place titles in the past six years, with no other competitor entering either of the top two spots. Pilz claimed third place overall, the best finish of the 18-year-old’s three-year World Cup career.

Watch the finals from the IFSC World Cup in Kranj: