The participants of the final Lead World Cup event of 2014 in Kranj, Slovenia, kept the crowd waiting until the very end, with the last three climbers grabbing medals in both the women’s and men’s division. 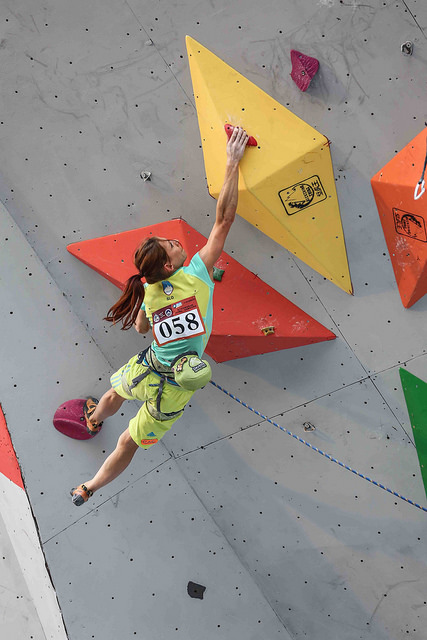 Mina Markovic, the last climber in the finals, shined in her home country, taking first and securing a silver medal in the overall Lead World Cup ranking.

“It is hard to find words to describe this amazing feeling of a perfect end of the season,” Markovic posted on her Instagram. “Enjoyed every moment of this comp and climbed perfectly in front of the home crowd.”

Jain Kim of Korea was the second to last climber and grabbed the silver ahead of Akiyo Noguchi of Japan. Kim was guaranteed the gold in overall Lead going into Kranj.

In the men’s division, Ondra took first, adding another medal to his history-making year after he became the first athlete to win the World Championships in both lead and bouldering earlier this year. Canada’s Sean McColl grabbed silver in front of Sachi Amma of Japan in third. In the overall Lead World Cup rankings, Austria’s Jakob Schubert ended in first, followed by McColl in second and Ondra in third.

“Wow, what a perfect ending to a long, fun, hard-fought season,” McColl posted on Facebook.