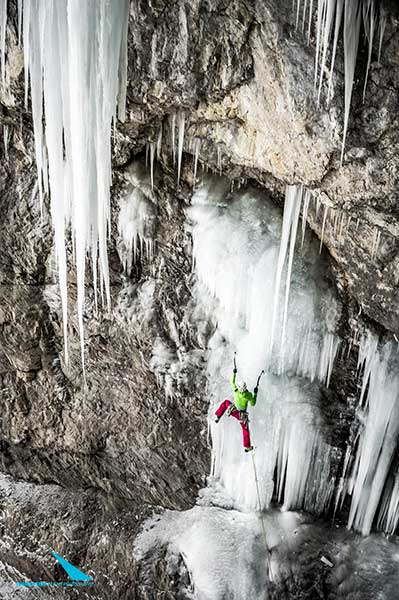 German mixed-climbing master Ines Papert has made what is believed to be the second ascent of Ritter der Kokosnuß (M12 WI 5) on the Breitwangflue wall above Kandersteg, Switzerland.

“For two years I dreamt about repeating this incredibly steep line, ” writes Papert.

Ritter der Kokosnuß, which translates to Monty Python and the Holy Grail, was established by German alpinist Robert Jasper in February of 2013. The line is notorious for its loose rock and sketchy, all-natural gear (nuts, cams and pins), and sits next to Jasper’s 1998 testpiece Flying Circus, which was was the world’s first M10.

Papert got her first shot at attempting the four pitch route this year on January 23.

“Rachel Schelb and I stood below the gigantic roof to start inching my way up this psychotically demanding test,” writes Papert. “As I made my way up the first M9 pitch I suddenly broke a hold and fell painfully against one of the frozen drips below. The ice broke, my back thankfully did not!”

Papert took two days of rest and nursed some bruised ribs before returning to the Swiss cave. On January 26, however, Papert tied in for her second burn and pulled out all the stops.

“I climbed the first M9 pitch without falling, just like the second M12 pitch through the jutting roof,” writes Papert. “For the next M9, I had to rely fully on my onsight skills: my feet skidded off the holds as I cut loose, floating on poor hooks, suspended for seconds above the void, my power almost coming to an end.”

Papert pulled it together, however, remarkably sending the demanding mixed-line on her second attempt.

Check out this video of Papert’s repeat.

For more on Papert, visit her blog at www.ines-papert.de.