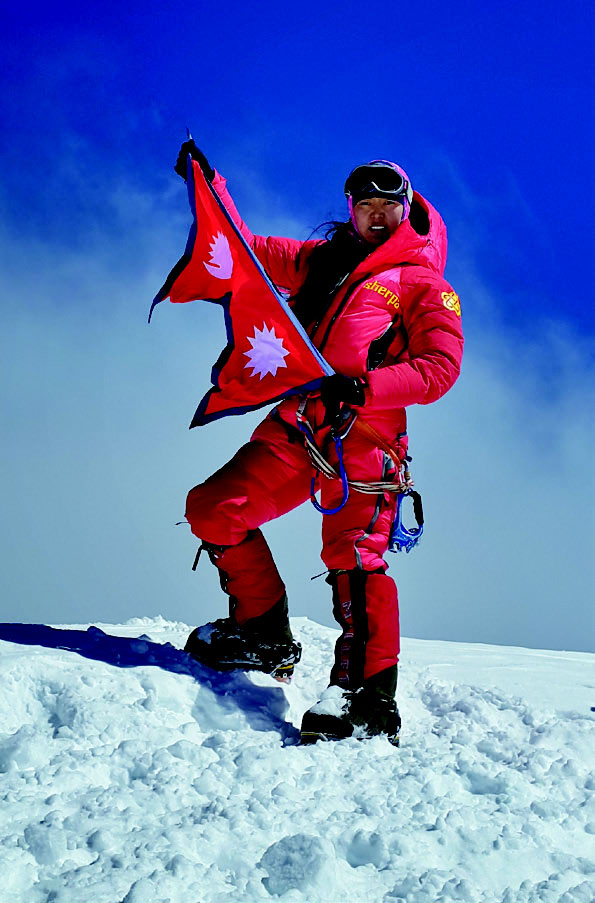 Tommy Caldwell, Kevin Jorgeson, Scott Jurek, Steve Boyes, Chris Davenport – these were some of the names nominated for the title of 2016 National
Geographic Adventurer of the Year. Ten teams or individuals from around the world were chosen for their extraordinary achievements in exploration,
adventure sports, conservation, or humanitarianism. Of those ten, by popular vote, one is honored with Adventurer of the Year.

This year, that title goes to mountaineer and humanitarian Pasang Lhaumu Sherpa Akita, for both her skills as a mountaineer, and tireless work to provide
relief to thousands of Nepali citizens following the 7.8 magnitude earthquake that hit the country in April 2015. The work has brought support to the
most remote areas of the country, and has been recognized this year with the award.

On April 25, 2015, Pasang Lhamu Sherpa Akita was an hour’s walk from Everest Base Camp when a 7.8 magnitude earthquake hit Nepal and triggered
an avalanche on Everest. While teams of climbers evacuated the area and fled to safety, Pasang Lhamu hiked into the chaos to help the climbers left
buried in the snow.

The earthquake devastated Nepal. Nearly 9,000 people were killed during the initial quake and the nearly 240 aftershocks that followed. Twenty-one thousand
were injured. Two-and-a-half million people were left homeless during the event.

On Everest, the avalanches caused by the quake made April 25 the deadliest day in the mountain’s history.

“I could have been killed at Everest Base Camp,” Pasang Lhamu told National Geographic, “but I was safe… I felt that God had given me a
chance to live, and I [felt] really compelled to do something.”

Pasang Lhamu grew up in the shadow of the world’s tallest peaks. Her village, Lukla, is a gateway for mountaineers heading towards Mount
Everest, and she grew up watching foreigners and family climb the peaks.

By age 15 Pasang Lhamu had lost both her parents and was left fend for herself and her six-year-old sister. To make a living, she took up mountaineering as a profession.

“When I said I wanted to climb mountains,” Pasang Lhamu told National Geographic, “many people discouraged me, saying that it was the role of
men to climb mountains to earn a living for the family.” Women were expected to take indoor jobs.

And yet Pasang Lhamu thrived. In 2007 she summited Everest via the North Ridge, and in 2014, she stood on top of K2 with an all-female team.

At age 19 she received formal climbing training from the Khumbu Climbing School, started by world-renown alpinist Conrad Anker, and in 2011 became the
first female mountaineering instructor in Nepal. She has been a guide both in the Himalayas and on Washington’s Mount Rainier. 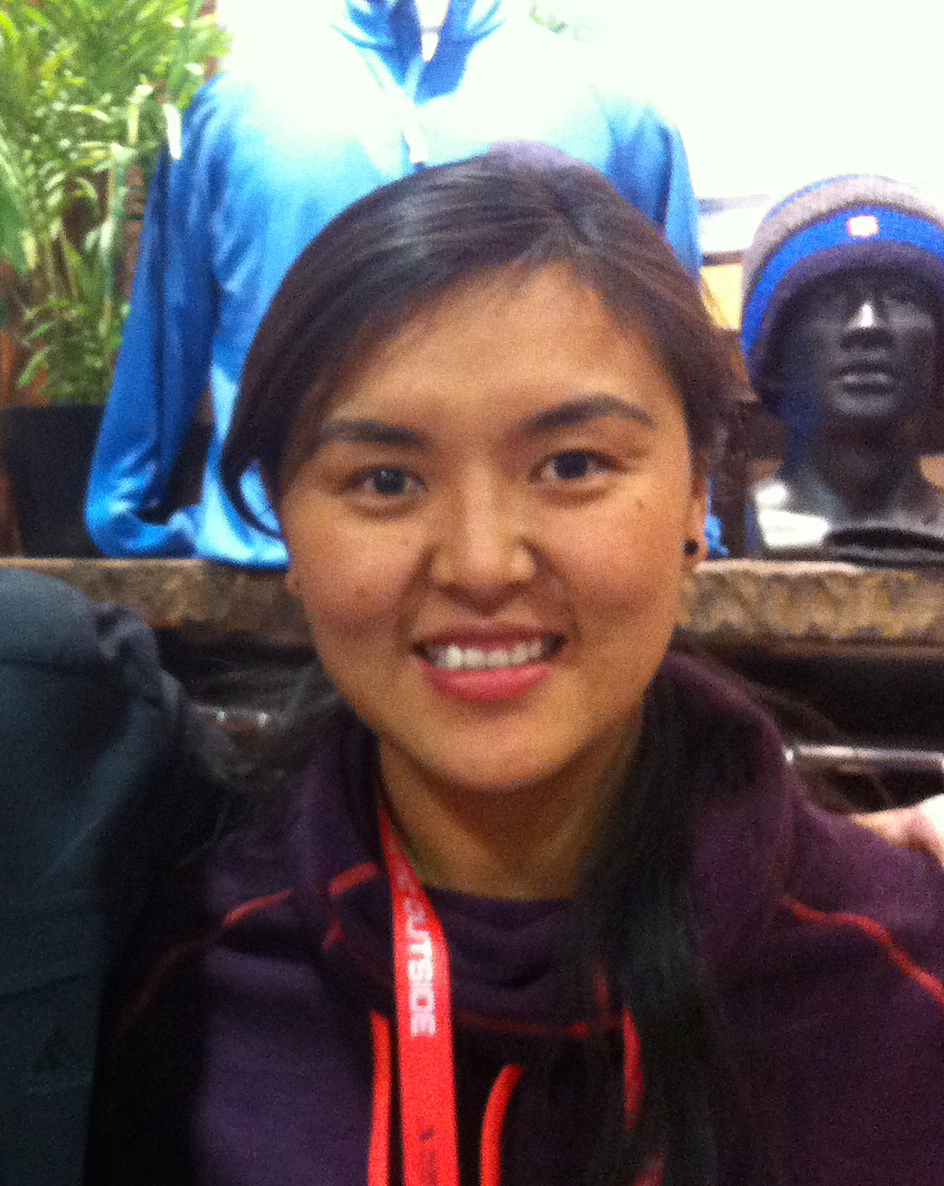 When the earthquake hit in April last year, Pasang Lhamu
shifted focus to the people of Nepal. She began taking food and supplies to the villages surrounding Katmandu where supplies were scarce, and organizing
fundraisers through Facebook and international connections she had developed as a mountain guide.

At first, Pasang Lhamu organized helicopter missions to these mountain villages to supply the people with the necessary resources for survival. Soon she
reconsidered, and along with local mountaineers began to hire local porters to carry supplies over the mountains to these places. In this way they
saved themselves the heavy expense of helicopter flights and were able to provide employment to the villagers. She helped to bring doctors, nurses,
and journalists to the villages as well.

As months have gone by since the earthquake, Pasang Lhamu has moved to helping villages in more and more remote locations,where the earthquake caused landslides
and avalanches that washed out critical access roads. In many of these villages, such as Laprak in the Gorkha District, nine miles from the epicenter
of the quake, villagers still remain in makeshift, temporary shelters.

Winter has closed in on Nepal, and it is among the coldest in Nepali history.

“We have distributed more than 11,000 blankets so far,” Pasang Lhamu told National Geographic, “in the most affected areas, including Gorkha,
Dhading, Sindhupalchowk, Kathmandu, and Dolakha.

But Pasang Lhamu is just getting started, and turning her attention towards providing women and girls with better education. “I believe education will
[allow] them to accomplish many things and open the door to many opportunities even in a male-dominated society like ours.” She wants women to be inspired
by her work, and not discouraged by the expectations that are placed on them.

Her work so far has paid off. “Pasang is the next generation of Nepal—driven, humble, talented, and focused,” says Ben Ayers, director of dZi, a
nonprofit for remote regions of Nepal, in an interview with National Geographic.

“Already she has captured the imaginations of thousands of young women across Nepal and her example has altered the course of the nation.”

And for Nepal, Pasang Lhamu’s nomination came as a much-needed relief from otherwise devastating circumstances. According to Ayer, “Pasang’s nomination
as Adventurer of the Year was often quoted as the only good news to happen to Nepal this year.”

Norbu Tenzing Norgay, Vice President at the American Himalayan Foundation and son
of Tenzing Norgay, told National Geographic that, “For Sherpas especially, this is a very proud moment.”

Nepal still has a long road to rebuilding its fractured communities, but ongoing efforts are making life easier in the country. Tourists
are returning to Nepal after a steep decline following the earthquake, and Everest will stand to be climbed another day.

Pasang Lhamu will continue her efforts in Nepal to improve the lives of women, girls, villagers, and citizens. And she wants our help as well.

“My big message is, come to Nepal, visit Nepal, directly support [our economy]. Tell us that our country is still beautiful. Instead of, ‘Give me a donation,’
I like to tell people, ‘Please, visit Nepal.’”

Congratulations to Pasang Lhamu, and best of luck with the work ahead.

READ: Snowball Fight on K2: An Interview with Pasang Lhamu

Boundary Breakers – A team of passionate women become the first female Afghan cycling team to compete internationally, sparking a cultural
shift in a country where women are expected to stay indoors and out of public life.

Climbers – Tommy Caldwell and Kevin Jorgensen completed what is considered to be the longest, hardest rock climb in the world, after spending
19 days on Yosemite’s iconic 3000 foot Dawn Wall.

Exploratory Kayakers – Professional kayakers Ben Stookesberry, Chris Korbulic, Benny Marr, and Pedro Olivia made the first sourse-to-sea
descent of one of the worlds most remote and dangerous rivers in Papua New Guinea, where 3,000 foot gorges protected any possibility of backing out.

Trail Runner – Scott Jurek clocked in at 46 days, eight hours, and seven minutes on the summit of Maine’s Mount Katahdin, and set the
all-time speed record on the iconic Appalachian Trail. The success is a crowning achievement of mental and physical tenacity in Jurek’s 20-year running
career.

Solar Pilots – André Borschberg and Bertrand Piccard made the world’s longest continuous flight ever across the Pacific Ocean, without
using a single drop of fuel. Their flight was powered entirely by the sun.

Wilderness Protector – Steve Boyes led a 120-day trip over 1, 578 miles along the Okavango River in Angola and Botswana to document and
record the lives of elephants and other wildlife in one of the worlds last untouched places, hoping to provide for it a protected future.