In 1974 my buddy Donnie Hunt and I were new climbers and didn’t know better than to try a rock route in winter conditions. The climb was only 5.7 but we were only 14 and the two pitches of Old #7 were pasted with snow. We carried an “ice tool,” a geologist’s hammer with the pick ground thin and teeth filed into the underside. Donnie wore a beige insulated jacket and, as he followed the second pitch, he had the intense look of a chess master contemplating a crucial move.

My recollection of an event from 44 years ago is amazing, but I can’t take credit for it. All I really recall is saying a quiet prayer while pawing onto a verglassed belay ledge. I only know those additional details because I snapped a photo of that climb and looked at it before writing this editorial.

Photography is amber. It traps events—climbs, in our case—for future viewing. One of the earliest climbing images is of Oliver Perry-Smith in 1913 leading a new route, Südriß (VIIb/5.9) on the Falkenstein in Germany’s Elbsandstein. The photo is a glimpse of a remarkable ascent, done with primitive gear. Lacking a carabiner, Perry-Smith has tied a protection sling around the lead rope. He’s secured by a chest belay. No gear. No harness.
Perry-Smith is styling in a vest, striped shirt and fedora. We know this because of the photo, shown here, by Walter Hahn.

Later, other memorable climbing images are of Sir Edmund Hillary and Tenzing Norgay striking “the pose” during the first ascent of Mount Everest in 1953, and Chuck Pratt, Royal Robbins, Tom Frost, and Yvon Chouinard atop El Cap in snow after the first ascent of the North America Wall in 1964. In recent times we saw Tommy Caldwell on the Dawn Wall, and
Adam Ondra cranking off the first 5.15d, Silence.

But photos aren’t just memories, they also capture the spirit of a moment, freeze action, reveal hidden beauty. Inspire. I’ll bet you have hundreds of photos on your phone. Dogs. Babies. Close-ups of flowers you don’t show anyone. And lots of climbing shots like mine of Donnie. 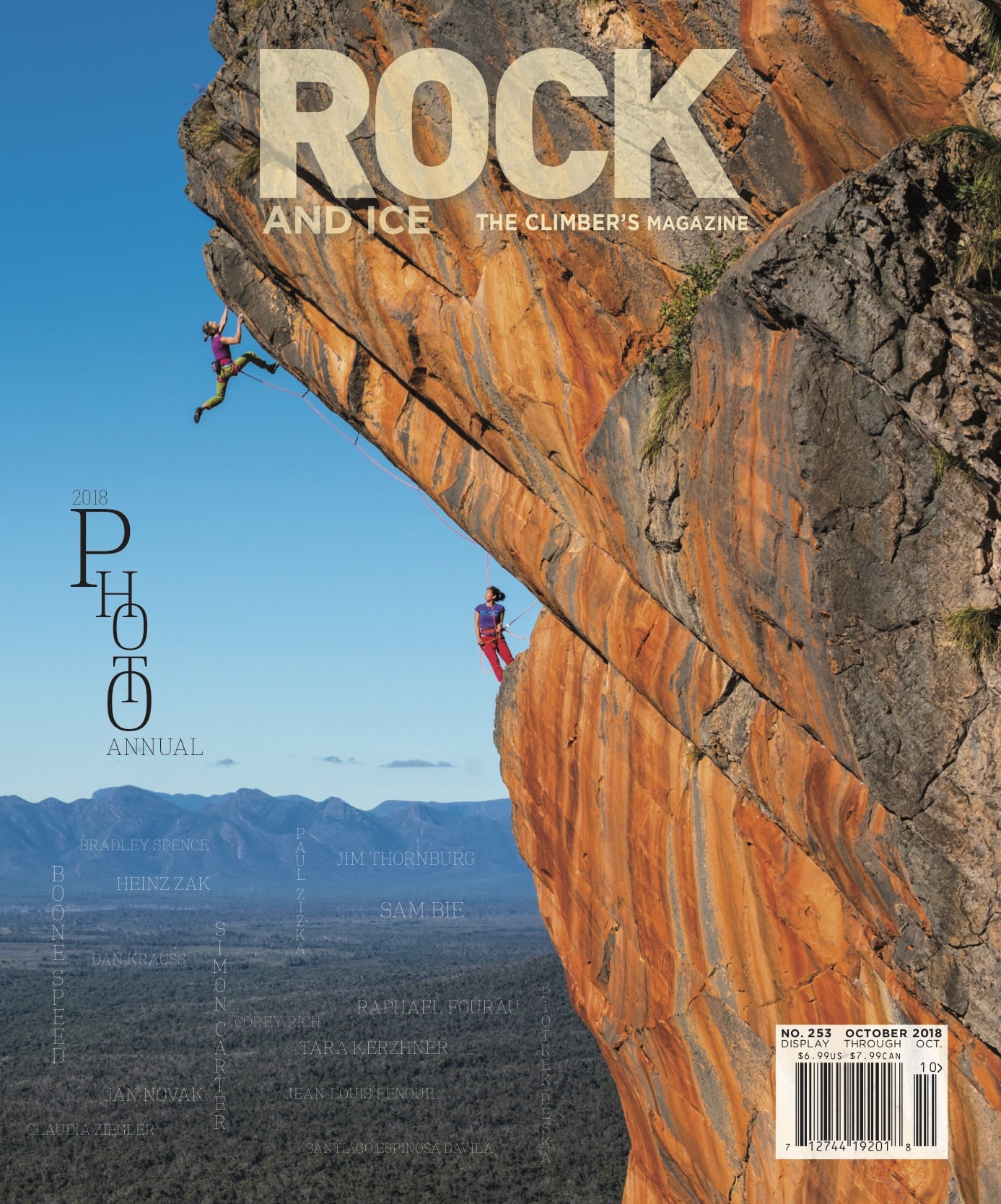 This Photo Issue is cover to cover photographs, the first of its kind in the climbing world. The images were culled from over 5,000 submissions. On these pages you will see Sam Bié’s eye-popping gallery of the seaside climbs of the Calanques (page 42). You could be forgiven for thinking Paul Zizka’s surreal nighttime scenes starting on page 24 came from Mars. Simon Carter’s essay of Smith Rock on page 30 casts new light on America’s first sport crag. Lukasz Warzecha’s “The Shapes of Water,” page 54, reveals climbing’s more fluid nature. One of my favorites, “Double Exposure” on page 52, has two photos of the same climb side by side. One, a recent photo by Bradley Spence, is of a gorgeous sun setting behind a climber on an arête on Mount Lemmon. The second image is of Heinz Zak in the same position free soloing the first ascent of the route in 1988. The climb wasn’t a big thing to Zak, who regularly soloed much harder routes, but no one believed him, a relative unknown back then. The photo finally gives Zak credit. I hope that this issue will give you at least one thing to remember.

——Duane Raleigh, Publisher and Editor in Chief of Rock and Ice

Trash and Tourists on Mt. Sinai

What in the F#&k Were You Thinking?