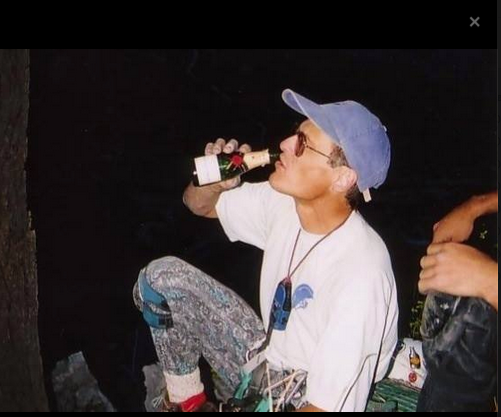 On August 5, the prolific new router and part-time resident of Potrero Chico, Mexico, “Magic” Ed Wright passed away after suffering a heart attack in Wisconsin. He was 66 years old.

Wright grew up in Mexico City and was introduced to climbing in 1967 while attending the University of Colorado in Boulder. Ed partnered with the legendary Boulder climber Jim Erikson, who reportedly gave him his nickname of “Magic” after watching Ed’s rapid progress.

In 1978, Wright was diagnosed with cancer. His doctor recommended a course of chemotherapy but somehow a mistake occurred and for his last treatment Ed was given a massive overdose. As a result Wright’s health was permanently affected. His hearing was impaired and his heart weakened. During the last years of his life Wright was on dialysis.

But his health issues did nothing to dampen his enthusiasm for climbing, and in 1993, he and his new wife, Tami, relocated to Hidalgo, Nuevo Leon, where Ed began filling the towering walls of nearby Potrero Chico with well-bolted moderate sport climbs. His multi-pitch routes, like the 12-pitch Estrellita (5.11a) and 23-pitch Timewave Zero (5.11a A0 or 5.12a), are among the most popular long sport climbs in the world and serve as a fitting legacy for a man who enjoyed connecting people to the sport he loved almost as much as he loved climbing itself.

By his own count, Wright bolted 83 of the roughly 500 routes in Potrero Chico, a total of 232 pitches in all.

Ed and Tami were also active in the small community of Hidalgo. They organized outings to teach local children to climb and helped start a program to sterilize the many stray dogs that live a marginal existence near the park. A native of Wisconsin, Tami brought a dose of earthy middle-America humor into the early days of the male-dominated Potrero climbing scene. I remember the day Ed was coaching her up one of her first climbs. Her expletives had us in stitches, especially when she yelled: “I should’ve joined an f’in bowling team like normal people!” But Ed was characteristically patient and soon Tami was helping him bolt new routes and putting up lines of her own.

“Magic” Ed really did have a seemingly paranormal constitution and a legendary toughness. The most obvious example was the time he had a heart attack while climbing El Sendero Diablo, a six-pitch 5.11c at the Potrero. Midway up the route, Ed experienced a full-on acute myocardial infarction. Somehow he kept it together despite intense pain and loss of strength, and with the help of his partner, rappelled down the route.

Ed Wright was a fixture at Potrero Chico. When I talked to Tami today, she said it was a day of mourning in Hidalgo. Humble, respectful and tough as nails, Ed had many friends, both Mexicans and Americans, who will miss him and his unique brand of hospitality, enthusiasm and optimism in the face of adversity.