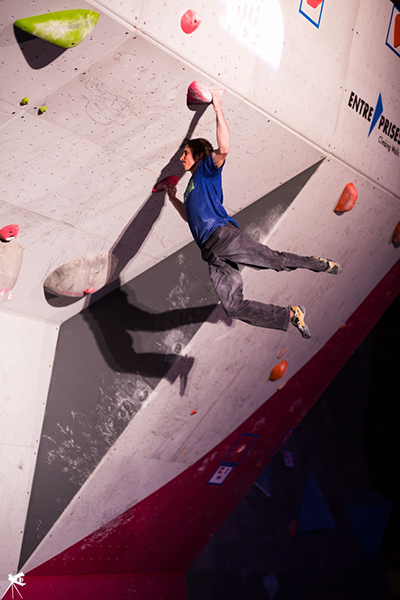 In a comp that hung on the very last problem, with crazy flying-squirrel moves for both men and women, Daniel Woods and Alex Puccio were crowned ABS National Champions for the eighth time each. Juliane Wurm, a World Cup standout visiting from Germany, won outright among women, but as a non-citizen cannot take a national title.

In finals fields that had squeezed out many uber-strong contenders, one of the most exciting, if unsurprising, aspects was the huge teen presence: Grace McKeehan, 15, Margo Hayes, 16, Megan Mascarenas, 16, Michael O’Rourke, 19, and Andy Lamb, 19 and a sophomore at Stanford, all acquitted themselves wonderfully, with Lamb and Mascarenas on the podium at the 15th American Bouldering Series Nationals, held February 21 and 22 at the City Center Auditorium in Colorado Springs, Colorado.

Yet the vet Vasya Vorotnikov was probably the biggest scene stealer, after multiple tries doing not one but two vicious problems in the ticking final seconds of his four-minute windows.

“I was surprised I stuck the move on number two,” he said. Age 26 and a PhD candidate in chemical engineering at the University of Delaware, he credited both luck and “the awesome crowd” for his second place, and said, “I just tried to give Daniel a run for his money.”

This viewer plus spouse were splitting screen time between the Olympics and ABS Nationals, streamed by Louder Than 11. And guess what we blew off? The Olympics, because the ABS event was riveting, the outcome continually uncertain. Angie Payne and Alex Puccio both approached number four with a national win in sight. Puccio had been unable to finish problem number three, leaving a window. 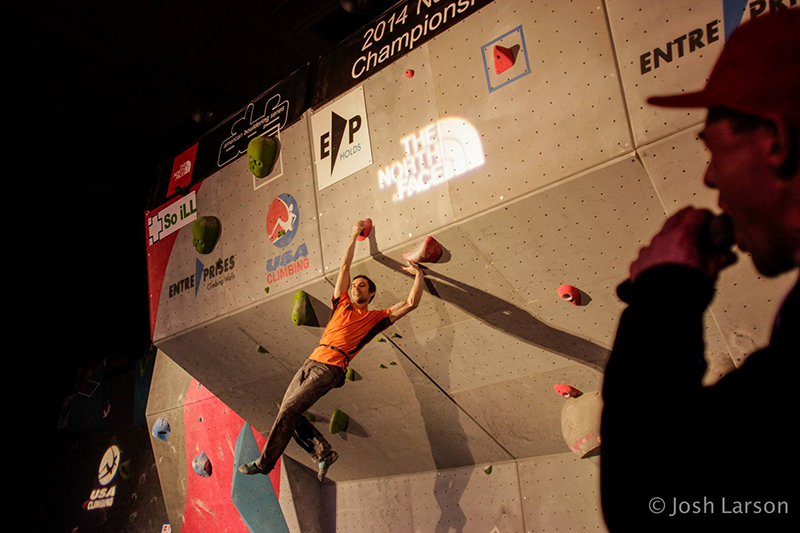 ABS Nationals had this in common with a phrase used in the Olympic broadcasting: Many a move was either successful or failed by a hair. Payne, who looked laser-focused and had been absolutely motoring, as well as Alex Johnson, also meaning business, both kept swinging off the massive jump move on number four. Payne got closer every time. Their steely but unsuccessful efforts made it all the more impressive that the three teens in the women’s field stuck that move, for further progress. 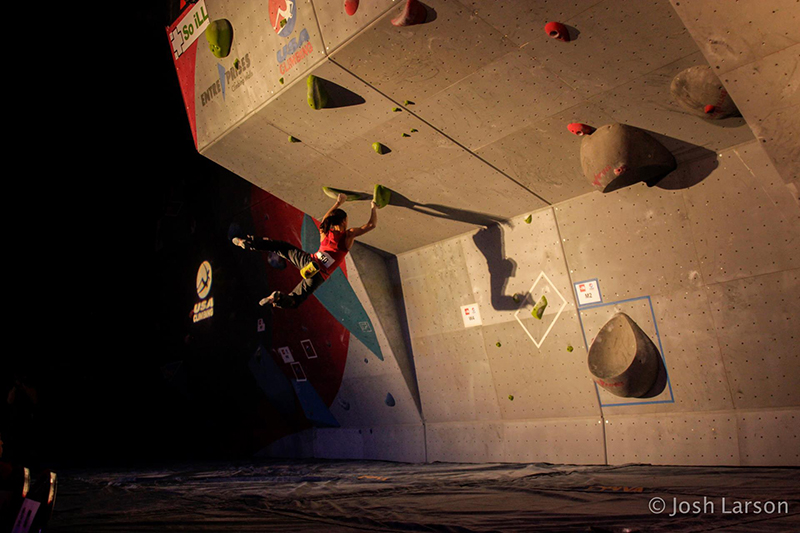 Wurm, smiling all evening, hit the move and made it so far she slid off the very last, palm-y move to the top. Puccio fell off the start repeatedly as well, but all she had to do was stick the move once, one-handed, and she reliably gunned to the top.

The coursesetting played out ideally: Devised by Jeremy Hardin, Chris Danielson, Mark Mercer and Max Zolotukhin, with forerunning by Flannery Shay-Nemirow and Johnny Hork, the problems all saw ascents, and by different people. Only one climber each, Puccio and Woods, finished the last problem.

Woods, who fell his first try on what he described as the “iron-cross dyno between two pinches,” told a LT11 commentator afterwards, “My first try I got really loaded. I thought, ‘I’ll give it one more shot.’”

The comp marked the first time, he said, that he had been able to do all four problems in a finals field.

You can visit absnationals.org for full men’s and women’s results.