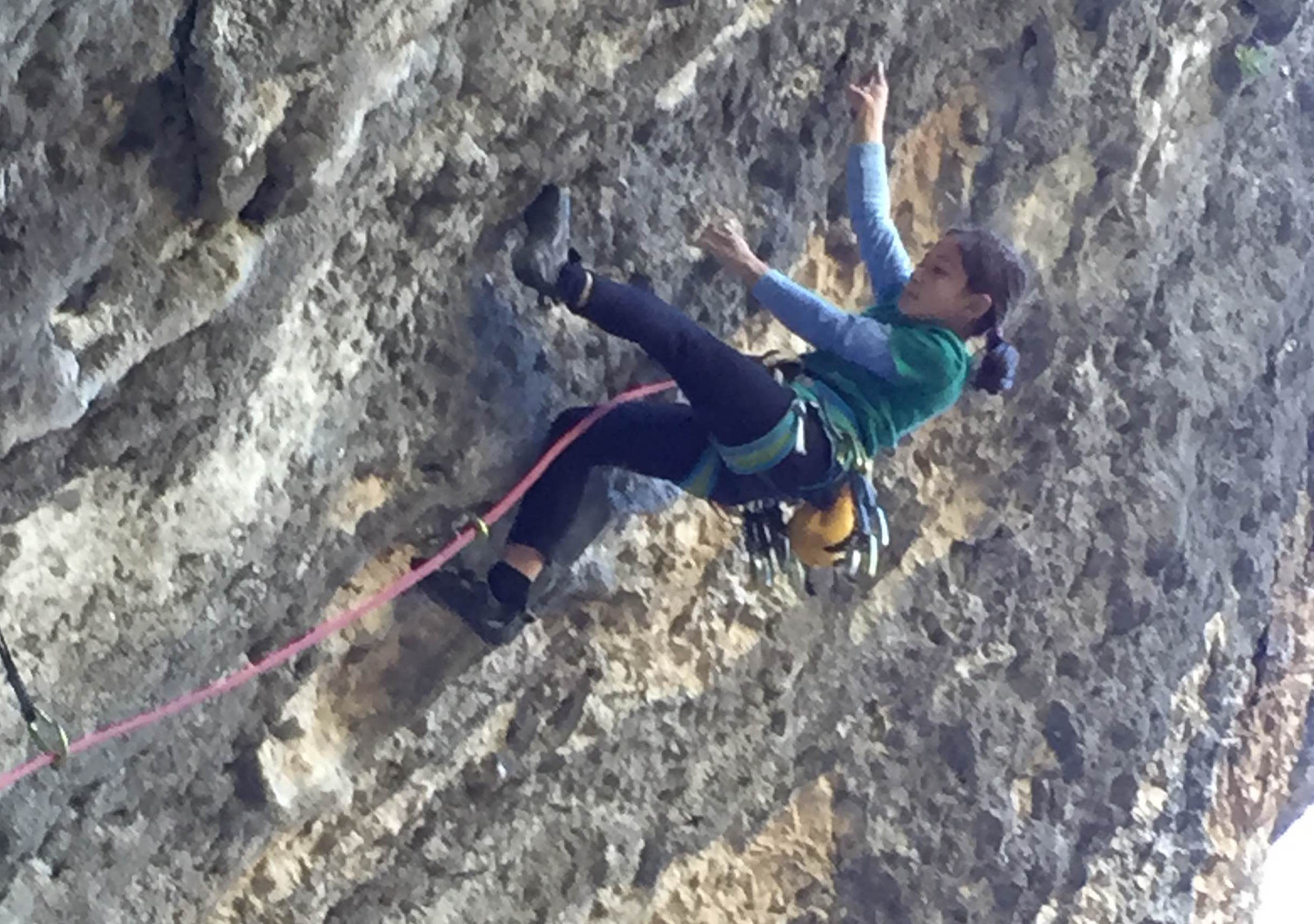 Last week 10-year-old Australian climber, Angie Scarth-Johnson, sent Tijuanita (5.14a) in Rodellar, Spain. The climb is a variation of Welcome to Tijuana (5.14b), which is what Scarth-Johnson thought she had climbed originally.
.
Rock and Ice caught up with Angie Scarth-Johnson over the weekend to hear about her accomplishment:

RI: Where are you from and what is your favorite local crag?

ASJ: I come from Australia and I live in the Blue Mountains, one and a half hours from Sydney. One of the local crags that I love going to is called Centennial Glen. There’s lots of different types of sport climbing there; easy, hard, long or short and bouldery. I also like that it’s a small hike in. The wildlife there is also really cool; snakes, lizards and really cool birds like my favorite – the kookaburra.

RI: When did you first start rock climbing and what attracted you to the sport?

ASJ: I started climbing when I was 7 and I thought it was the best thing ever. It all started climbing the walls at home. I thought I had superpowers because I could climb the doorframes. I had an accident climbing a tree so my parents took me to a climbing gym [where there’s a rope.]

RI: At 10 years old, you are now the youngest person to climb the grade of 5.14a. Was this record a goal of yours for a while or was it spontaneous?

ASJ: Most things I climb are spontaneous, because my parents don’t climb I don’t have someone to tell me what climbs would suit me so I just have to work it out on my own. I never really top rope and I actually hate top roping. I just work it out sections at a time. When I did Welcome to Tijuana, I vied off route on the second draw to the left, 3 moves – less than one meter from the draw – and then came in to clip the third draw. I did this because of reach. The locals said that I did a variation of that route not shown in the guide or topo. I chose to respect that, and therefore did a climb called Tijuanita (8b+/5.14a). I am still really happy with this. They have promised to update the topo so that this confusion doesn’t happen again.

RI: Who are some professional rock climbers that you look up to?

ASJ: There are so many unreal climbers that I think are amazing; Sharma, Ondra, Ashima, Sasha, Kai, Mirko and so many more. But I think Hazel Findlay is awesome. What she does is so brave and fearless. I met her last year and she was almost as short as me, so I know I should stop being scared of big whippers.

RI: How are you able to manage schoolwork while traveling the world to climb? Do you ever get grounded (excuse the pun) if you don’t get your homework done, or is that not even an issue?

ASJ: I always get grounded, mostly because I do silly things like climb dangerous trees when my mum tells me not to, or fight with my sister. Sometimes I secretly hypnotize my chickens and they don’t lay eggs for a couple of days. You can do this by laying them down on their backs and rubbing their tummies.

I have to do school work while I am traveling, I really hate it because I’m psyched to go climbing and I can’t until I finish.

RI: If you could have one super power, besides spiderman-like abilities, what would it be and why?

ASJ: If I could have one power I would have to say I’d love to be rubber woman, so I could stretch my way up my project and reach any problem. I could actually clip the anchors from the first hold if I wanted to.

Editor’s note: In a previous article, we incorrectly reported that Angie Scarth-Johnson climbed Welcome to Tijuana (5.14b) instead of Tijuanita (5.14a).