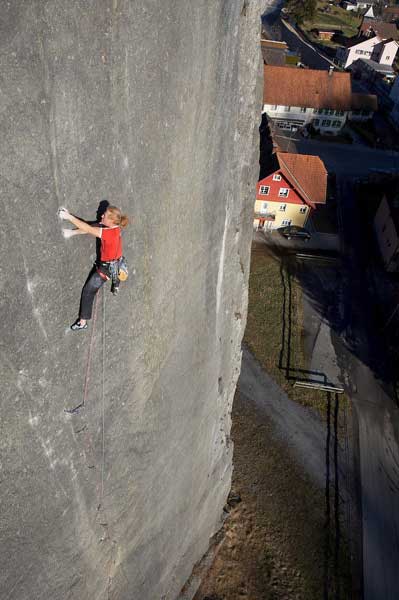 I always had the motivation of opening new routes. But we believed in Reinhold Messner’s opinion that the bolt kills the impossible. So the best route we opened was Vergissmeinnicht (500 meters, 5.11-, A4) in the year 1981 in the Rätikon. At that time sport climbing was swapping over from Yosemite. My hero was John Bachar. Then everything changed. Motivated by Martin Scheel, I began thinking that using bolts was OK, when you use it only for protection and not for aid. I started the new game 1987 in the Rätikon. The routes were Maximum (5.12d), Morbus Scheuermann (5.13a).

How did you develop your strength for the hard ascents you would eventually accomplish?

In the years 1982 through 1986, I concentrated on sport climbing and training. I was able to repeat many of the hardest routes and also opened the hardest routes in our region: Delirium Tremens (5.13c), Take it easy (5.13d) and Zukunftsmusik (5.14a). After all those years only sport climbing, it started to be boring. So I need something new—I realized a new game: opening alpine-sport climbing routes on lead. This was such a mental game and was fascinating. The first route in that style was New Age (5.13c) in the Rätikon, at the Schweizereck.

Tell me about climbing in the Ratikon in the 1990s. You put up some of your most famous routes there such as Silbergeier. How were you going about establishing those intimidating routes?