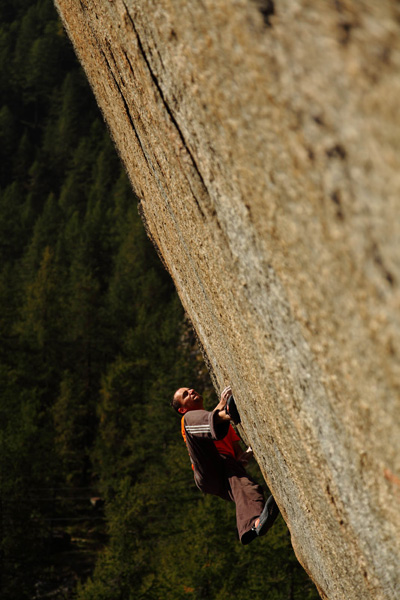 Bernd Zangerl currently lives like a bouldering monk in Ticino, Switzerland. He rises with the sun in a small house made of rocks on a mountainside, reads or writes in the morning, and then spends the rest of his day trying to unlock the sequence of a long-term bouldering project.

“But if I am not busy trying to master a difficult problem,” Zangerl told Rock and Ice, “then I am searching…”

Zangerl’s lifelong search for hard undone lines has recently unearthed a host of beautiful and difficult granite boulder problems in Italy’s Val di Orco. “I guess I opened around 40 problems till now,” says Zangerl. “But there’s still lot’s of potential for more.”

He has released a short video (see below) that highlights his explorations, and the problems depicted range from V13, to V3, and most everything in between.

But he adds, “The grades are, as always, a proposal, and watching this video will make it easier to repeat them.”

But from the wild highball swings of El Salvador (V12/13), to the cello shaped arête of Self Aperto (V13), it’s apparent that Zangerl’s vision for hard lines is as strong as ever.

“Maybe some of my ascents in the last years have been off the radar,” he says. “But I am still super motivated.”

At 34-years-old, Zangerl is a bouldering heavyweight. In 2001, the unknown Austrian geography student shattered the climbing scene’s collective consciousness with the first repeat of Dreamtime (V15), which at the time was the world’s hardest boulder problem. Sharing the same passion as his friend Fred Nicole, Zangerl began his quest of searching for difficult and aesthetic boulder problems, leaving in his wake some of the globe’s hardest and most celebrated testpieces. Memento (V15), New Baseline (V14), and Anam Cara (V14) are just a few classic problems that bear his name. Zangerl put areas such as Magic Wood and Ticino on the map with his eye for new lines.

Rock and Ice contacted Zangerl to learn about his new Val di Orco boulders and more.

How did you discover the Val di Orco boulders?

I heard about this valley already years ago, when I started climbing. At that time it was called the “little Yosemite of Europe” Finally, I packed my gear, drove down and explored parts of the valley. I found and climbed a handful of old problems, probably from the early 80s, and also climbed a route from legendary Patrick Edlinger—who visited the valley a long time ago. I was surprised that nobody had specifically searched this area for boulders, especially as I found some amazing problems. I was even more surprised that I found such great quality, pure and demanding lines on very technical granite! I spent weeks alone in Val di Orco, enjoying nature and exploring most of the valley.

What is the hardest problem at the area?

For me, it started 2003 in Magic Wood, when the good lines just got higher. I still remember the first highball I did with my friend Steini (Thomas Steinbrugger). We tried it ground up of course and we experienced our first big falls into some shaggy old small crash pads. We named the first highball Höhenrausch (High Altitude Euphoria). Compared to what we do now, and with the protection of a Mondo pad, it might not be a highball anymore.

The motivation is just a line, nothing else. When I stand in front of a boulder, and this thought comes up: “Is it possible, or do I need a bolt?” everything has started. I love this feeling, just me and the rock. No rope, which gives me security, no rope that hinders my climbing, no bolt clipping that stops the flow. I love the special concentration involved. Climbing becomes dancing. But there is preparation involved. I really wait and listen to my soul, my motivation. Sometimes it’s just an idea in the back of my mind and suddenly I know the moment has come. Many highballs I did alone, or just with my best friend. Usually we do not carry 6 Mondo pads up a hill, because when I am doing it, I know that I will not fall upon the point of no return. Rarely I repeat highballs. Usually I do first ascents, where it’s more conceptual to take a “risk.”

What are your feelings about the current climbing scene in the world?

Changes are currently visible in all parts of climbing. It doesn’t matter if we look to alpinism or to bouldering. Climbing is getting trendy, with all its outgrowths. For better or for worse? At the end that’s just a point of view. Also in our society everything has to be compared, everything must be measured. We are collecting cars, money, victories…. material things. And now we are collecting boulder problems and get our points on the scorecards. This “hunting and collecting” mentality is just a mirror image of our society. Each of us should reflect what his/her reasons are to climb up a rock, a mountain.

Are you primarily still just a boulderer, or do you enjoy other styles?

I am still “just” a boulderer! I did alpine climbing, sport climbing and also ice climbing when I was much younger. On my rest days, or when I am not so motivated for bouldering, you will find me at a crag or sometimes even on an alpine climb. At the end it’s all the same. Climbing up a rock.

It changes with my projects and motivation. In the last years I traveled a lot, spent months in the Himalaya, visited Rocklands again and lived in my car in Norway. I am constantly on the lookout for new challenges. Undiscovered lines are the basis for fresh motivation and inspiration. This is just as exciting as finding the solution to difficult moves of a boulder project.

Check out this video of Zangerl’s Val di Orco boulders.