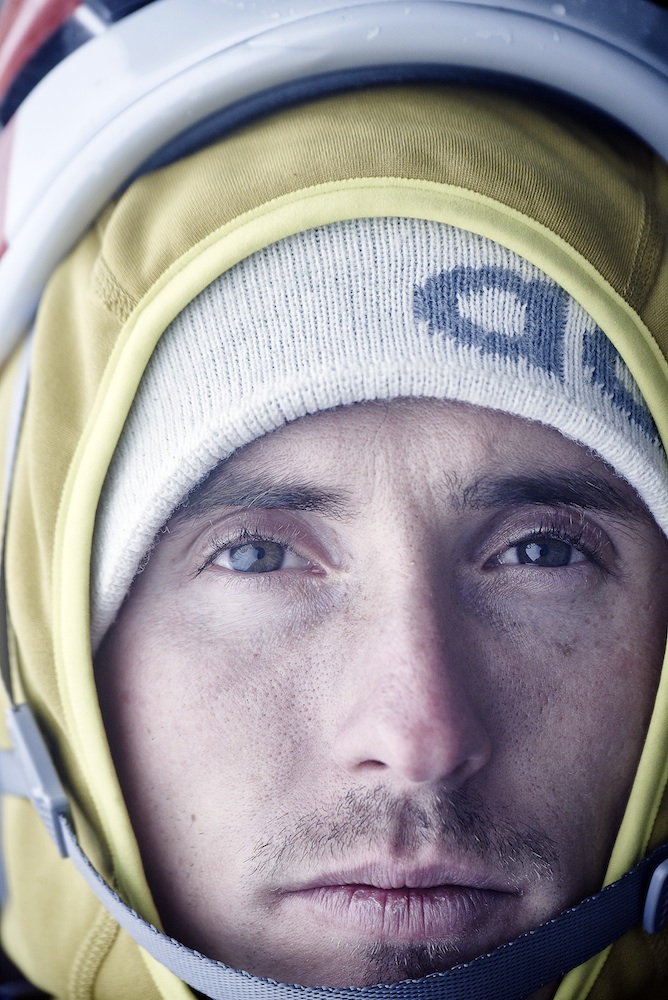 On August 29, Carlo Traversi and Sasha DiGiulian completed Magic Mushroom (7c+ 5.13a) on the North Face of the Eiger, Switzerland.

Traversi, 27, and DiGiulian, 22, had been attempting to climb the Eiger’s North Face for weeks. Their original goal was to climb Paciencia (5.13b), but after conditions shut them down, the team set their sights on 20-pitch Magic Mushroom.

Are you still over in Switzerland?

Yep, still at the base of the Eiger, heading to Germany tomorrow to train in the gym, Café Kraft, and to climb in Frankenjura.

Where are you based?

I’m based out of Boulder, [Colorado], but travel a lot so it’s hard to pin down one spot. I usually spend some time in California, Colorado, and the rest traveling. This spring I put a lot of time into the Western Slopes, up at the Fortress [of Solitude] and Rifle.

It was cool. Definitely an interesting wall. Definitely full on alpine climbing, even though there are bolts—with the loose rock, the rockfall, the weather. It was a really good experience. Alpine climbing definitely pushed me in a way I haven’t been pushed before.

The climbing was really good—good limestone and high quality. The majority was really, really, solid.

We made four trips up to Paciencia. On the first, the route was fairly dry, but we didn’t have our systems in place, we were just going up to test the waters since we had never climbed together before—we were feeling out the partnership.

Then I got sick, totally bedridden, and Sasha went back up alone, but it was wet. Three-quarters of the route was soaking, but it was mostly the easy climbing. The seventh pitch, the 8a [5.13b] crux, however, was too wet to climb. And the crux never dried out afterwards.

How much alpine climbing have you done?

I’ve done a decent amount, some in the Sierra Nevada’s. I’ve climbed the Diamond a few times. I’ve done some alpine routes and a bunch of hiking in Colorado as well.

With the alpine climbing I’ve done in the past, I’ve always been with someone more experienced, so I knew if shit hit the fan, we’d probably be all right. But on the Eiger, I was the one with the most experience so I felt a bit responsible for Sasha’s safety. It was a learning experience for us both. 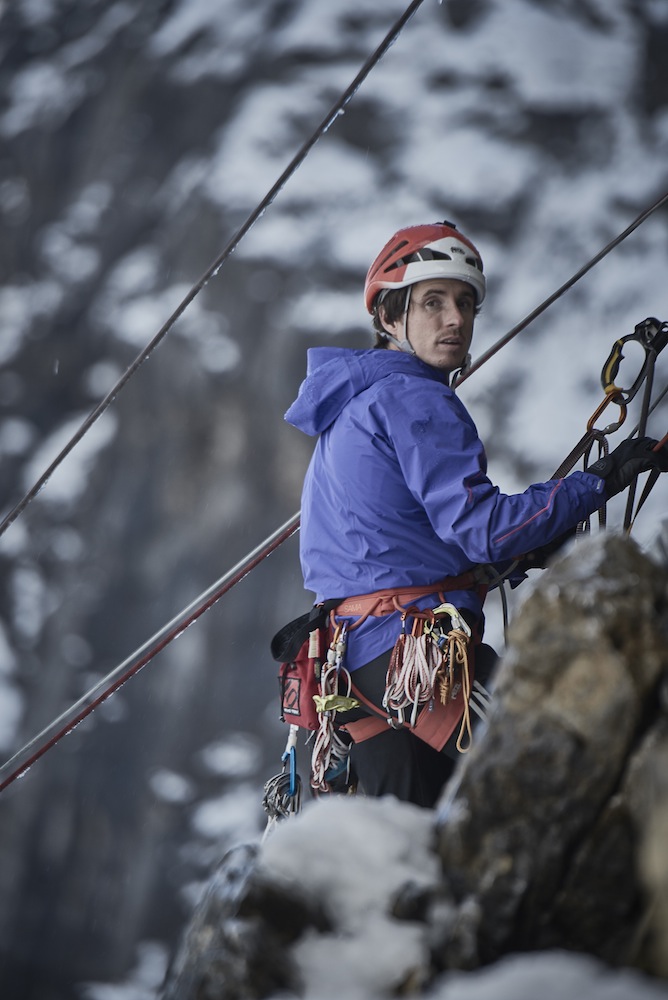 Did you ever feel over your head?

I do know certain rules of alpine climbing, from my little bit of experience, and the climb was a test of my skills and myself. But I never felt over my head, that’s for sure.

The biggest frustration was the weather. Not necessarily the rain, but it was so warm, too warm, that the wall was seeping a ton from the melting ice and snow above the climb. It was constantly wet and that was frustrating. I definitely never felt that I was over my head though.

Was it a tough decision to bail on Paciencia and go for Magic Mushroom instead?

Yeah, it was a really tough decision. I struggled with it a lot and I know Sasha did too, but we made the decision based on the weather and the time we had left.

There was lots of pressure involved—we were there with sponsors and weren’t doing the climb on our own. And it was highly publicized.

Paciencia was definitely the coolest option. It’s the hardest, coolest route on the Eiger and has a lot of history. But Sasha had to get back to school and our time frame was shrinking. We decided it was a better option to just climb a route, and our best chance was with Magic Mushroom.

It was a difficult decision and risky, since we put a lot of effort into Paciencia and were potentially giving up some dry days on the route. Even though we had never been on Magic Mushroom, it was drier and gave us our best chance at climbing the Eiger. I don’t regret our decision.

While trying Paciencia did you run into Robbie Phillips and Willis Morris?

We did our first week there, but not after, besides around town.

How do you feel about their ascent of Paciencia?

That’s awesome. Like I said, I don’t regret our decision, but I am bummed that Paciencia didn’t dry out enough for us. I’m psyched for those guys that they were able to climb it.

I think the wind storm really helped dry it out. We were sleeping at the top of Magic Mushroom getting blasted, and that must have helped to dry Paciencia. We had no way of knowing though—we couldn’t predict that it would dry out.

Sasha is really motivated, optimistic and driven—all good things to have in a climbing partner.

Being the more experience alpine climber, I definitely felt like I was looking out for her a little bit. I felt responsible for her safety.

How did you react to her “freak out” when she was up there without you?

I just kind of laughed. It wasn’t a big deal in my mind, but I know she felt that it was a bigger deal. I’ve had a similar experience in the alpine and I helped her shrug it off.

When I was sick, I felt like I was bailing on her. She was up there alone, with no real partner to talk to or to share feelings with. Not having that partner to rely on can be difficult, especially in those conditions and when you don’t have alpine climbing experience.

Who came up with the idea to climb Magic Mushroom instead?

Roger Schäli, who is a Swiss mountain guide and has climbed the Eiger North Face like 30 times, suggested that we try his route Magic Mushroom.

We knew Magic Mushroom was dry and that we would have a two- to three-day weather window. When we went to clean our gear from Paciencia, it was still wet and had patches of ice on it. We didn’t think it would dry out.

Roger said the best way to climb Magic Mushroom was to set camp at the top, which is about a three hour, steep hike from the train station, and rap in. It was a really tough few days. I feel that rapping in was the tougher way to do it than climbing bottom up.

I brought 600 feet of static line and the first day, rapped in and fixed lines on the first six or seven pitches down. We jugged back up to our camp and slept for the night, then rapped the remaining pitches to the base the next day.

We climbed from the start but didn’t redpoint the 7c+ (5.13a) crux pitch that go—we only had one try on it each, and kept climbing. We rapped back in the next morning and climbed the crux pitch.

How do Paciencia and Magic Mushroom compare?

The routes are similar. Magic Mushroom has more variety though and I enjoyed it more. Paciencia is techy, and the easy pitches are really loose. Magic Mushroom is more consistently steep and has better rock quality, plus the really cool top-out feature, the iconic mushroom.

BASE-jumpers use it as an exit point and 20 or so would fly past each day. It was pretty crazy, we would look up and see a human body flying past us. It sounds like a giant falling rock. Every time I watched them fly down and I thought they were going to hit the ground, but their chutes always opened. I got used to it after awhile.

In terms of climbing, we definitely didn’t push ourselves. The route had short boulder problems, up to only V6, maybe V7, spread out with good rests.

It would be nice to do something harder. I lost a lot of power on the Eiger, since you really don’t do that much climbing. In the few weeks we were here, we did a little sport climbing around the area, but were mostly just sitting around, waiting on the weather.

Would you ever go back to finish Paciencia?

Yeah, for sure. The logistics of climbing the Eiger can be kind of overwhelming, with all the equipment, the weather, and the train is expensive. You kind of have to just be there and wait for the right conditions. But it would be cool to return.