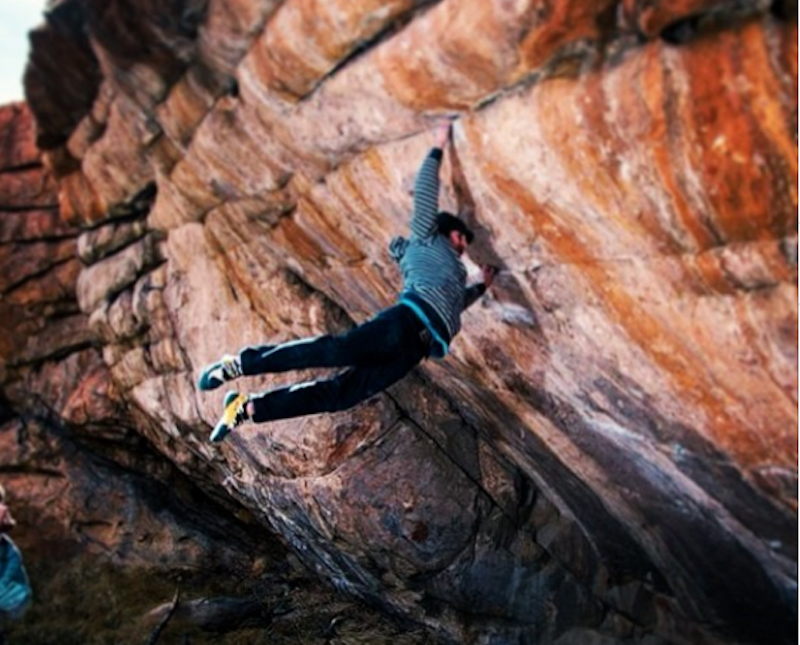 Yesterday, news about Daniel Woods sending a new V15 in the South Platte of Colorado swarmed the internet. The source was an Instagram photo (see below) featuring Woods’ entire body flagged nearly horizontal while his hands gripped incut-crimpers. Woods’ aptly named his new V15 creation Defying Gravity in the caption of the photo along with the description of the problem stating: “This #beast is 25 feet tall, 58 degrees overhung, and #explosive.”

If you read the caption, as 1,671 people (and counting!) who “liked” the photo probably did, you might have thought … How in the world did he know that this problem was 58 degrees overhanging?

By measuring it of course! Woods gave Rock and Ice the low down on his new V15 and explained that his friend Max Krimmer had “busted out the protractor” to get the exact specs on this new Colorado testpiece, which Woods’ says is number two on the list of his top three favorite boulder problems. Below is the rest of the story behind Defying Gravity, the latest V15 in North America.

R&I: How did you get turned on to the boulders at Thunder Ridge in Colorado’s South Platte?

DW: I was talking to Jimmy Webb online and he sent me a photo from Jon Glassberg’s blog of this project in the South Platte. The photo itself was enough to amp us up and make the two and a half hour trudge out to Thunder Ridge. Jimmy and I met up with local Colorado Springs climber Max Krimmer who showed us the project and the rest of the area.

R&I: What type of stone are these boulders made of?

DW: The stone is unique. It is a red, orange, tan, and white granite containing a texture similar to grade A sandstone. The rock is featured with dishes and knobs. Ironically, the project is the steepest and slickest line in the area. Nothing else looks or feels like this line. Defying Gravity is the king line out of the boulders that I saw. There is a nice V9 to the far right that Paul Dusatko put up called Log Jammin’. Max Krimmer also put up a nice V7/10 (morpho) to the right of Log Jammin‘ that is really cool.

R&I: OK. Bust out the flash beta for Defying Gravity.

DW: Defying Gravity ascends a 58-degree overhung wall (Max busted out the protractor) on semi-incut rail features. The distance between the rails is just far enough to make the moves possible at that angle. The crux boils down to the first move. Austin Geiman, Griffin Whiteside and Jimmy Webb were all trying to take the first obvious 3/4 pad rail (starting hold), paste the right foot down low, and do a huge jump with the right hand to another 3/4 pad campus rung. After you stick this move, you match the rail with your left hand, go right hand to a quarter pad flat rail just above the previous rail, match this with your left hand, and pounce right hand to a sloping jug slot a good distance above your head. From here you do the remaining 10-foot (V7) victory finish on perfect Rocktown-esque slopers.

But I was unable to do the intro dyno due to being not strong enough, so I came up with a new method. I found a half pad flat vertical edge with a fingernail size sliver, creating just enough bite to use as a mini-pinch for the left hand. I then squeezed the shit out of it, moved my right foot high, slowly scooted my left foot into a mini-cutout that allowed me to clamp and compress with my feet, then dove right hand into the above 3/4 pad campus rung. These two moves felt to be V14 alone. The redpoint move is the finishing dyno in which your feet nearly go horizontal. This move alone felt in the V11 range.

R&I: How much effort did Defying Gravity take?

DW: It took me two days to figure out the individual moves. On day three I was able to link the first two moves together, but fell three times on the final dyno. On day four I sent the beast in 40-degree temps and 35 m.p.h. winds. I felt as if I was going to blow away on the last dyno!

R&I: You mentioned that Defying Gravity makes your “Top Three” boulders of all time. What’s the full list?

DW: So far my top Three list of boulders include:

R&I: Finally, is there more potential for Thunder Ridge? What’s the future for this area?

DW: That is a good question. From the looks of it, there are a ton of boulders, but nothing like this feature. It would be cool to walk around the area more and see what else it has to offer. Defying Gravity is one of a kind, and that is what makes it so special.