Keith Ladzinski and featured in the column What I&#39;ve Learned in Rock and Ice issue No. 208.” src=”https://d1vs4ggwgd7mlq.cloudfront.net/wp-content/uploads/Article-Images/News-Photos/May-2014/EthanPringle2.jpg” />Ethan Pringle spent the spring season in Las Vegas, and took the opportunity to head to Clark Mountain on the Nevada-California border and hop on Chris Sharma’s mega-line, Jumbo Love. At 5.15b, Jumbo Love is probably the hardest sport route in North America and in the past Pringle has linked big sections. In 2007, Pringle, Sharma and Chris Lindner avidly worked on the line. The following year, Sharma asked if he could try to send it and Pringle graciously complied. Sharma completed the first ascent in 2008. The route has yet to see a second ascent.

Pringle, 27, who hails from San Francisco, has been climbing since childhood. He was the undefeated junior national and international champion from 1998 – 2001 and his rock climbing accomplishments include, in 2004, the first ascent of the landmark Red Rocks boulder problem, Clockwork Orange (V12), and the third ascent of The Wheel of Life—the 60-foot plus V15 in the Grampians, Australia, which Pringle gave a 5.14d route grade. Pringle also pushes the grades on both sport and trad with ascents such as the gear route China Doll (5.14a) in Boulder Canyon and Sonnie Trotter’s Cobra Crack (5.14) in Squamish.

Pringle also has an affinity for attempting Chris Sharma lines and has repeated Sharma’s benchmark 5.15a Realization in Ceuse, France, and his testpiece, Era Vella (5.14d), in Margalef, Spain. Pringle returned to spend some more time on the route in May of 2012.

Rock and Ice got in touch with Pringle to talk about Jumbo Love, training and modern sport climbing.

RI: You have attempted Jumbo Love in the past. This spring you returned to Clark Mountain to work on it?
Yes! I’ve been up to Jumbo Love twice in the past couple weeks and hopped on it a few times each trip. My Honda Element doesn’t have the required clearance to make it up the 4WD dirt road to the parking lot. I need a real off-road vehicle!

RI: What draws you to the route?
It’s just a hard, long, badass line! It is certainly an impressive route. I know the route is very close to my physical limit, so it’s really inspiring to me. It’s huge and exposed and pretty much as long as you can find—you get to top out the wall!

RI: Jumbo Love is 250-feet long. What kind of rope gets you to the top?
I have a sweet 100-meter Maxim Airliner that I can use to get to the top. If I do go to the top though, I have to lower back down to the lip, go in direct to an anchor there, untie, pull the rope and re-tie to get back down to the ground. You’d need 130 or 140-meter rope to lower from the anchors all the way to the ground, I think.

RI: What do you find mentally challenging about Jumbo Love?
The route’s length and difficulty is intimidating, and if I’m not feeling in top form when I’m trying it, I feel even smaller and more intimidated next to it, but that’s part of the draw—having to overcome that intimidation. 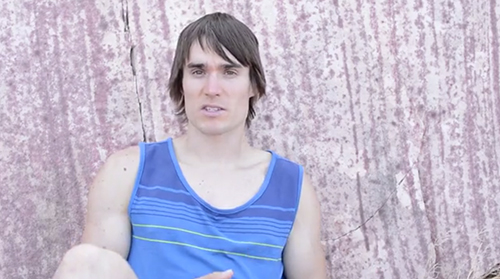 RI: What about physically challenging?
I just need to be more fit and prepared than I am now to give good links on the route, and with a few more days up there, I could get back to my previous highpoint. I can already make decent links on the route, what I need is to be in better shape to put it all together.

With Jumbo Love it is just as much pure-fitness, muscle-memory and mental-fortitude as it is a problem-solving issue—figuring out the beta. The process of modifying and refining beta is a never-ending one until I send a project.

RI: What kind of training would it take to send the route?
An optimal season of preparation for Clark Mountain would go as follows. First, build strength and bouldering power over the winter. Next, train endurance by running and going on long hikes at elevation. Then, train like crazy on plastic, focusing on power-endurance. Finally, get to the route early in the season and start preparing my calluses for the sharp pockets.

RI: What will it take for the send?
I think I just need to show up really physically prepared, psyched, with my head in the game … and with a high-clearance car of my own!

RI: Why do you think Jumbo Love has not seen a second ascent?
Mostly, because nobody’s even tried it! I’ve put a couple short seasons into it since Chris did it. Then Daniel Woods and Ben Spannuth went and tried it for maybe two weeks a year ago and that’s it! If it were in Europe it would probably get a little more attention.

Let’s be honest, professional sport climbers are like wild buffalo here in America—we killed them all off by the early 1990s. I’m not saying there aren’t PLENTY of young bucks here in the States who wouldn’t have a good shot on Jumbo Love, but nobody has even bothered to try because it’s not in the Red River Gorge, Rifle, or Movement [climbing gym in Boulder]. It’s 30 minutes up a jacked-up dirt road an hour south of Vegas on I-15, and it takes a little work to get there.

RI: Why do you think American sport climbers were “killed off?”
There are still a few left. In the late 1980s and 90s, sport climbing was really popular and growing a ton, and the enthusiasm from professional climbers reflected that. Everyone was wearing lycra, clippin’ bolts at Smith Rocks and Rifle and training like machines for all the competitions. I think the rise of bouldering’s popularity is partly to blame for the fact that only a few guys in the U.S. put their time and energy mainly into sport climbing. Also, a lot of the talented young climbers in North America these days are trending towards alpine climbing. But in Europe, sport climbing is still widely popular, probably even more so than bouldering, and the community reflects that. Hence there are more “professional” sport climbers.

RI: As for your other past projects, didn’t you get close to repeating Sharma’s Es Pontas in Mallorca, Spain?

3 Days With Ethan Pringle from 3 Strings on Vimeo.