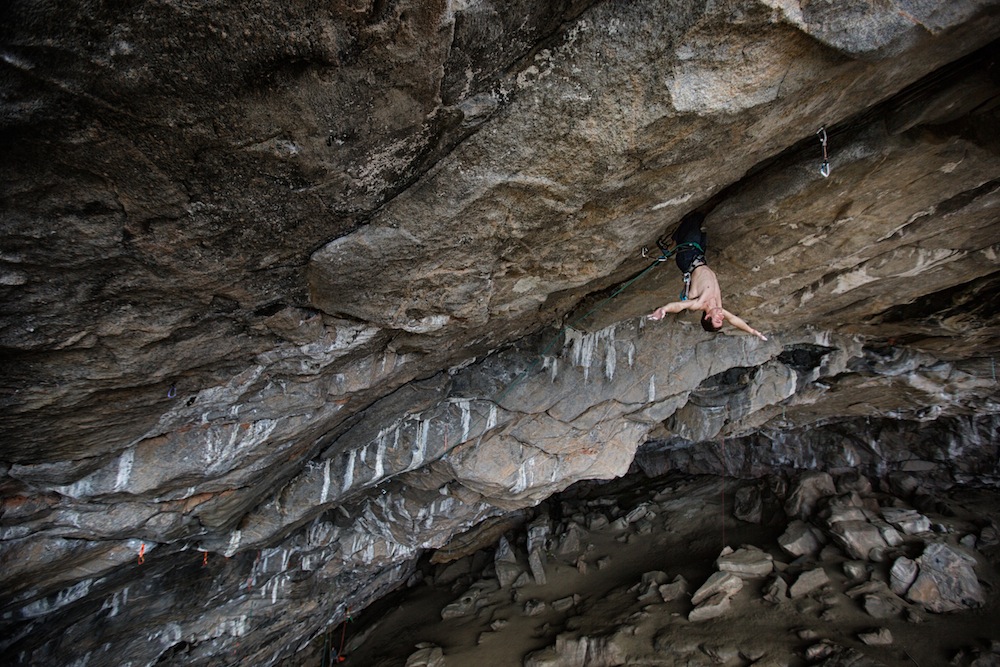 Bolted by Magnus Midtbø and first climbed by Adam Ondra, Thor’s Hammer saw a boom of popularity with ascents by Alex Megos, Jakob Schubert, and Daniel Woods since August. Few climbs of the grade have been redpointed in such rapid succession, making it a contender with Chris Sharma’s Realization (the benchmark for 5.15a) in Céüse for the world’s most-climbed 5.15.

Rock and Ice caught up with Pringle to find out what makes Thor’s Hammer one-of-a-kind.

What about Flatanger inspired you to visit?

The cave, called Hanshelleren, is a really unique. It’s heavily featured, severely overhanging granite that requires little cleaning and zero manufacturing. There are no other areas like it in the world. I’d reckon there are no other single crags in the world with almost 20 8c (5.14b) and harder routes with no manufactured holds!

I came to a festival here in Flatanger in 2012 when the place was starting to blow up, but before Adam Ondra first came and wrecked shop. I was lucky enough to FA two of the coolest, hardest lines in the cave- The Eye of Odin (5.14c/8c+) and Nordic Plumber (5.14b/8c). I fell in love with the place, vowing to come back someday. Later that summer and fall, and over the next few seasons, a dozen or so 8c [5.14b] to 9b+ [5.15c] routes were established, almost all by Adam. When a trip I was scheduled to go on this September fell through and Daniel [Woods] invited me out here, I jumped on the opportunity.

What makes Thor’s Hammer so desirable and unique?

I think what attracted Magnus Midtbø to bolt, and later Adam Ondra, Alex Megos and Jakob Schubert to climb Thor‘s is simply that it’s a super bad-ass line! None of it feels forced, and it goes more or less straight up the wall for 55 meters, tackling terrain from 40 degrees overhanging to dead horizontal past bulges, cracks and slopey rails. It’s also the only route in the cave rated 9a+ (5.15a).

I think the fact that Alex and Jacob did it really fast made it more attractive and approachable to Daniel and me. I can’t lie— a small part of the appeal is that I want to see how I compare to the mutant Euro climbers. When a route of that difficulty sees that many ascents and becomes like, the testpiece of the season (like Realization [5.15a] or Era Vella [5.14d] have been in past seasons), its perceived difficulty and mystique shrinks.

It’s like, monkey see, monkey do. It’s funny how certain areas, routes and boulder problems come into vogue and then are forgotten. But I don’t think Flatanger or Thor‘s will be forgotten anytime soon.

How does Thor’s Hammer compare to other climbs of the grade?

It’s always hard to compare climbs— every rock in the world is different, conditions are different and every body is different. Thor‘s is a style of its own. It has a bouldery and sustained section at the beginning that’s about 35 feet long, and for me that was the crux. Once I got past that section I didn’t fall, but I had the route pretty dialed. After that initial section, at least with kneepads, there’s a bomber kneebar and jugs where you can get back to 90% before the redpoint crux. The rest of the climb is about 8a+ (5.13c) or 8b (5.13d) with decent rests throughout, and a pumpy section at the end.

I think 9a+ (5.15a) is a fair grade. Part of me thinks, does the upper three-quarters of the route actually add difficulty, or could the total difficulty of the climb be defined by the first five bolts? I think it does, though. I felt like I could have fallen all over the upper three-quarters. But I’ve tried routes in Margalef rated 8c+ and 9a (Victimas Del Futuro and Gancho Perfecto) that feel as hard or harder than Thor‘s.

Grades are all over the place and it’s ultimately impossible to compare them. That’s why there’s never a good reason to argue over them.

Tell us about your process of projecting Thor’s.

Photo: Lindsey DolanI thought I’d have a decent chance on Thor‘s, considering Megos and Schubert
did it so fast and I had a whole month. That said, after my first couple tries, I was like, whoa, this thing is hard! I don’t think I’m prepared for this!

I threw my draws on Little Badder (9a/5.14d) and started trying that instead, but after seeing Daniel’s super impressive attempts and quick progress on Thor‘s, I got inspired to put my eggs back in that basket.

Then Dave showed up and just watching his first attempts on the route was inspiring. He’s just eternally optimistic. Dave and I spent a lot of time on the lower half adjusting our beta, sometimes several times in the same section, before finding a method that we thought would work best.

We’d usually lower after the first half, or jug a fixed line up to the mid-point and start climbing from there. It was only until we started making bigger links that we’d actually go to the top from the bottom.

One of the biggest challenges we faced on Thor‘s were the four or five wet holds at the beginning of the first crux section. We [did] our best to dry the holds with rags, chalk, paper towels and I even used tampons because I heard that was the ticket. The holds never really felt dry. We learned to deal with the wet holds, accepting that they were part of the difficulty.

There’s always a conversation happening in your consciousness between the optimism and disbelief—You’re constantly talking yourself into the fact that you’re capable and worthy of a send.

It would be awesome to finish Little Badder! There’s a section of wet holds on that too, in this crack right before the crux. I might just have to stuff tampons in there and deal with the holds if I want to do it!

I needed a break from trying my absolute hardest and being in project mode, so yesterday I threw my draws on Muy Verdes (5.14b/8c). It’s really fun and I’m psyched to play around on that for a couple days before going back to Little Bladder (as we’ve affectionately come to know it).

Is there potential for route development in Flatanger?

There’s a little real estate left in the cave, in the first 60 meters, but not a ton. The upper half of the highest, steepest part of the wall holds potential for multi-pitch or crazy-long single-pitch routes. There are a couple open projects as well. There is potential to do 9c (5.15d) link-ups using the existing routes— Thor’s into Move (5.15b/c), or The Illusionist (5.14d) into Iron Curtain (5.15b), for instance.

The fishing here is awesome. I went out by myself the other day and caught a foot-and-a-half long cod! I was pretty proud of it but bludgeoning it with a rock and gutting it on the beach at dusk was a gnarly, eye-opening experience. It made me think that I shouldn’t eat any meat I don’t kill. So far I haven’t implemented that idea— Maybe I need to go catch and kill more fish.