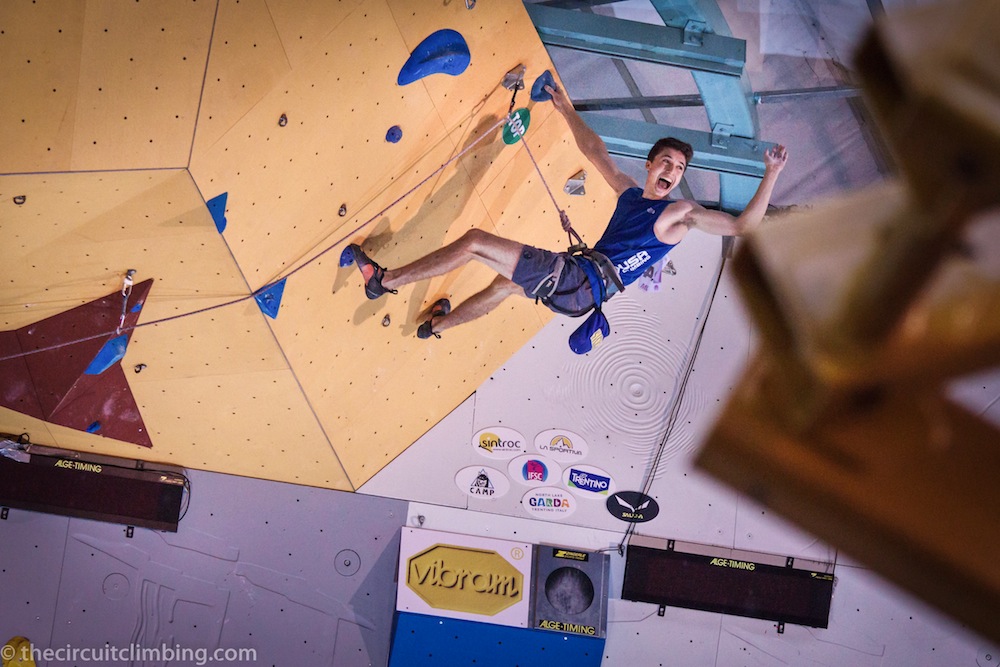 Now that you’re on the Open USA Climbing Team, will you attend IFSC World Cups?

In the next year or two, I would like to be able to go to IFSC World Cups. It’s intimidating to think about climbing against the strongest climbers in the world, but it is also insanely exciting. As I’ve seen in the past year, competitions aren’t about who is necessarily the best climber, but rather who can perform the best on any given day. This piece of information makes me excited to see how I can do on an Open International stage.

What comes to mind when you think about leaving the youth divisions for the adult competitions; are you motivated by the cash, or intimidated by the competitors?

So, while it may seem intimidating on paper, I think that I will be ready for the challenge as I approach it. I have never climbed for money, and I don’t think this will change as I join the Open circuit. I climb for the fun of it, the values it teaches, and of course for the amazing people that do it.

Did your training for Italy change since you placed 2nd in SCS Open Nationals?

I knew that the style in Italy would be like nothing I had ever seen before. Therefore, when I was focusing on my training, I made sure I was getting on a wide range of styles. One of the best places for exposing yourself to unique styles is the New River Gorge in West Virginia. The New doesn’t just work on your physical capacity to complete routes, but also your mental capacity to figure them out. Spending time there also increases your power endurance, which is a must for European-style routes.

Along with this method of training, I also climbed at several different gyms in my area. This allowed me to test my ability on a variety of styles. I also trained for three days in a European gym, which had a comparable height and style to the walls that I would climb in the competition. I think that climbing in that gym made me especially ready, but more than anything, it gave me confidence that I could climb on European-style routes.

Confidence is one of the most important things when approaching a competition. In a competition like this one there are plenty of guys who can climb at an elite level, but whether they think they can climb the route they are given makes a huge difference to who performs their best.

So, while I think my physical training did change, my mental training is what I think pushed me to excel.

There’s a pattern in your approach to events. Famous climbers like Robyn Erbesfield-Raboutou and Rob D’Anastasio have talked about having no expectations. Do you agree this is an important key to the competition mentality?

“No expectations” has definitely done me well in the last year. My coach Randi Goldberg, always says that Finals is a victory lap. I couldn’t help but think of this at Worlds. Whether I came in Eighth, (the last spot in Finals), or Second, I would have already made this competition a success, (though second is pretty cool).

Expectations can also be interpreted in different ways. I always have expectations of how I wish to perform. The tricky thing is making sure that I can separate this self-expectation from the expectation of how my performance will compare to others’ in my category. When approaching a competition, I think it’s okay to expect to perform well myself. But when the meaning of performing “well” changes to performing better than another competitor, or finishing at a specific ranking, that’s when expectations can hurt me.

Another important idea to note is that climbing is supposed to be fun. Taking the sport too seriously makes it smooth into the clay of other sports. What makes the sport unique is that I think pros and beginners climb for the same reason. I don’t think many other sports can say the same.

Are you involved in your local community?

For the past three years I have been involved with a program called Peak Potential, which helps children with physical disabilities climb. This is my second week of school so I haven’t joined a community volunteer program yet. I would like to start a program similar to Peak in Boston.