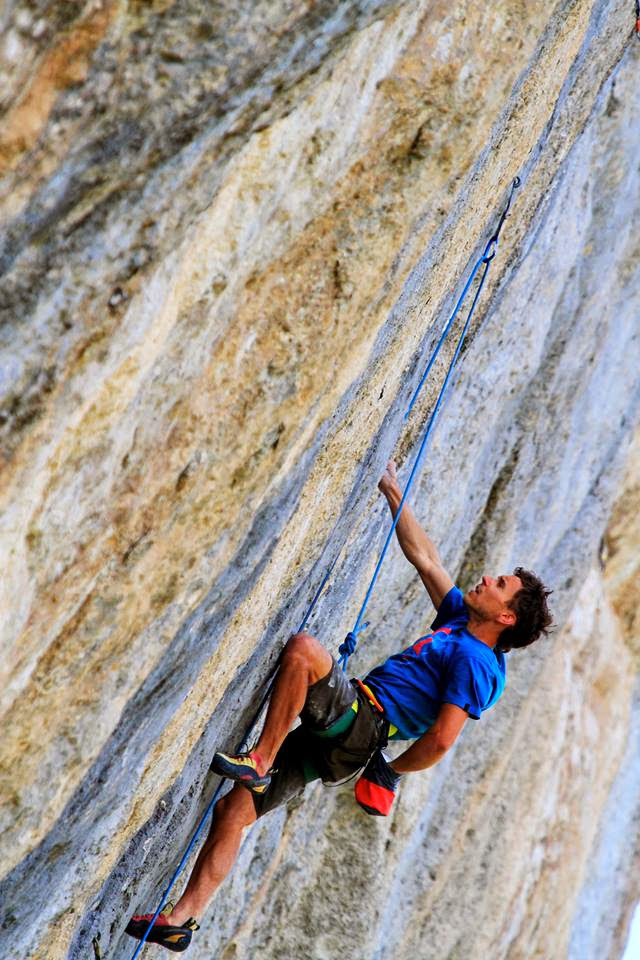 “It was a dream come true to clip the chains,” wrote Siegrist in an e-mail to Rock and Ice. “I worked very hard to do this route, and changed my climbing, my training and my lifestyle in preparation for it. It feels different than any other route just because I wanted this one so much more. I’m very stoked.”

Siegrist had ventured to the fabled cliff of Céüse
in late April, with the specific goal of climbing Biographie – a route Chris Sharma first climbed in 2001 and what is widely considered the benchmark for 5.15a.

“So, as some of you know, I, in essence, came to France to climb Biographie, or as many Americans know it, Realization,” wrote Siegrist in a blog post on May 5. “I can remember the first time I saw the route—it is truly magnificent.”

After trying the route diligently over five weeks, Siegrist finally realized his dream on the morning of June 1, and made the eighth ascent of what he considers “definitely [his] hardest route.”

Rock and Ice caught up with Siegrist while he celebrated his victory to hear more about his send of Biographie.

R&I: When did the dream of climbing Biographie/Realization begin for you?

JS: Well the seed was planted when I first saw the iconic Big Up footage [Dosage I] of Chris [Sharma] sending back in the day—but never in my wildest dreams could I have imagined actually climbing it back then, or even several years ago for that matter. When I first came to Céüse in 2012, I was keen to try it, but after only a few tries just on the bottom, I could tell that I was clearly not ready.

R&I: After you returned this year and tried the route, did you think it would go? Any doubts?

JS: This time around I first tried the route on my first day here in late April. Part of hard redpointing, in my experience, is learning how to operate always with doubt. Never once during the process was I sure of anything, other than the fact that I was going to try my hardest and see what came of it.

R&I: When did you start realizing you had a shot at sending the route?

JS: The most encouraging moments on the route were during my first week here, because I was quite worried that a certain section would be impossible or super hard for me. I had not even gone half way up the climb back in 2012 so I was just hoping that I could even make it through the top. It was really encouraging and stoke-inducing to start linking sections and then put together the route to the (old) first anchor [5.14c in itself] after a couple days. At this point I thought that, ‘well, I have quite a bit of time left and I guess I’m doing pretty good!’

R&I: How many attempts did Biographie take for you?

JS: I lost track of tries a while back, but I would guess that I climbed through the bottom 5.14+ at least 25 or maybe 30 times. I worked on the route for a solid five weeks, although I ended up resting more than climbing over the last two weeks due to deteriorating skin.

R&I: What was the crux for you?

JS: The crux is without question keeping your mental and physical composure for the upper boulder problem.

R&I: What made the difference for you yesterday and how did it feel to clip the chains on such a historic benchmark 5.15a?

JS: I made some beta refinements last week that really helped, if only to give me refreshed stoke to try after failing for a month repeatedly. It was a dream come true to clips the chains. I worked very hard to do this route, and changed my climbing, my training and my lifestyle in preparation for it. It feels different than any other route just because I wanted this one so much more. I’m very stoked.

R&I: Did you scream like Sharma when you stuck the jug near the top?

R&I: Is this the hardest send of your career?

JS: Yes, this was definitely my hardest route. Physically sure, but the mental challenge on this climb is exceptional. It’s been an emotionally exhausting process.

JS: I’ve got another five weeks or so in Europe. Maybe 10 days of more climbing in beautiful Ceuse and then I’d like to check out Switzerland before heading stateside.