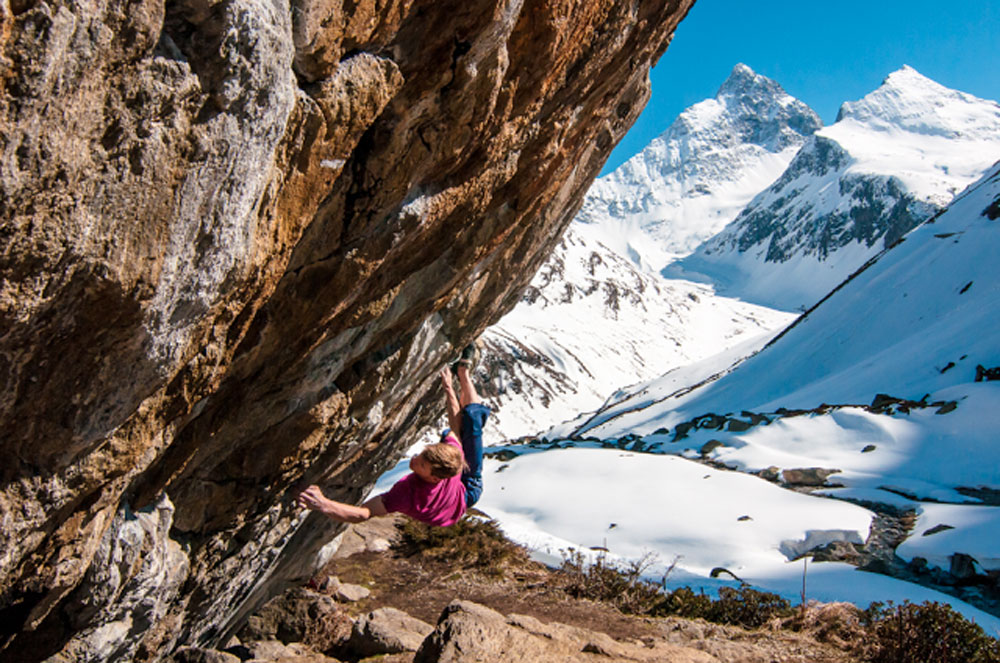 The Swiss climber first eyed Highlander in 2003, when he ventured to Sustenpass in the Swiss Alps with a friend. At the time, he’d only been climbing
problems around 7C (V9), so the thought of an 8C problem seemed nearly impossible. Yet Keller was immediately drawn to the line. That same day he gave
it his first try, and he couldn’t complete a single move. “But that did not worry me too much,” he says. “I knew this boulder would not run away.”

Rock and Ice talked with Keller to find out more about what it takes to put thirteen years into one project, how he overcame two major injuries
and what he learned from the process—and why he won’t be giving up climbing any time soon. 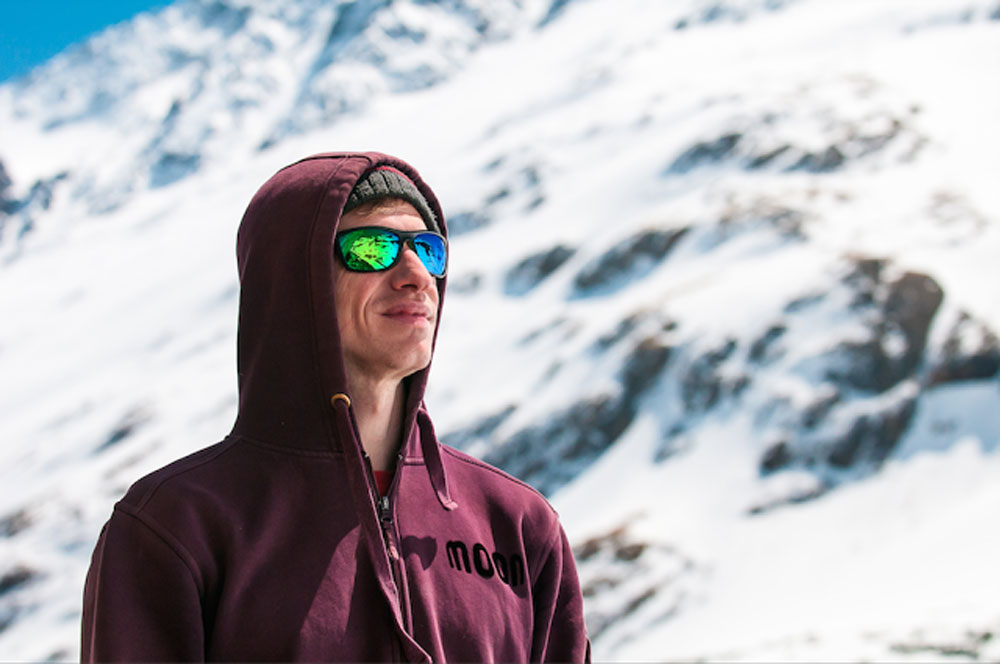 How often did you try the problem each year?

I did not count the days but the years. Usually I was up at Sustenpass from late April until late October, so around 40 days a season. I spent for sure over 400 days underneath that boulder.

Thirteen years is a long time. Was there ever a point where you considered giving up?

But there was the moment when I was going for the crux move, and I could feel my hamstrings ripping off my hipbone—that was scary. I was really scared that I would never be able to climb again, or ride a beautiful powder slope with my snowboard, or ride another wave. And that I would not be able to finish Highlander.

How did you manage to keep a positive attitude during your hamstring rehab? 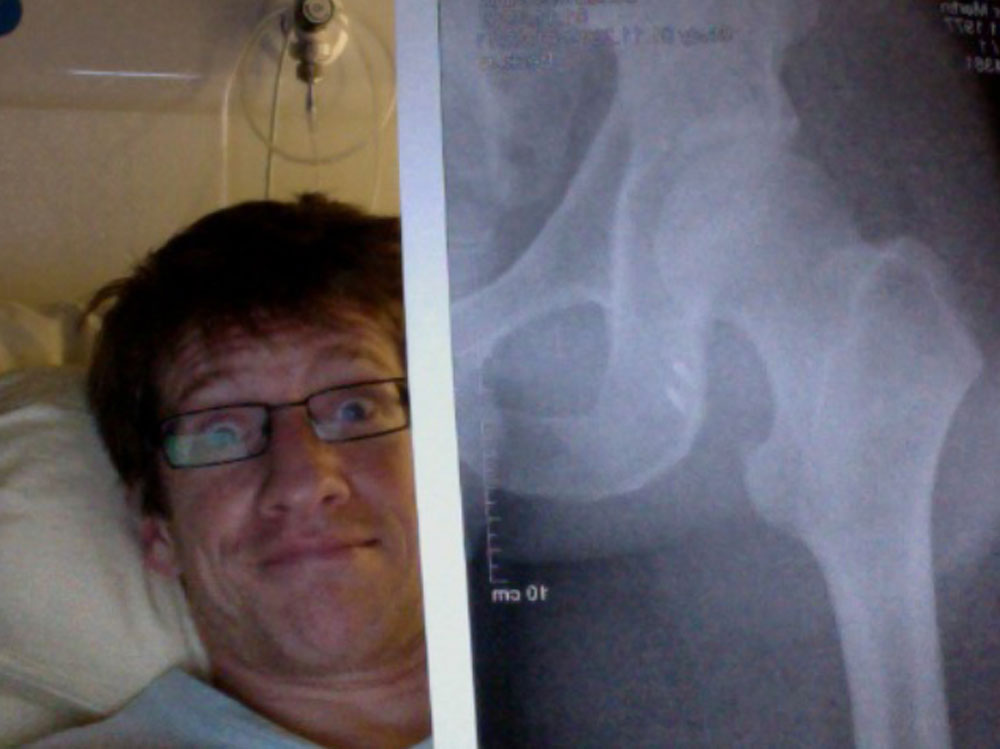 Starting at the point when my doctor told me that the surgery was a success, a new project started: “Project get back stronger.”

With my physical therapist I planed ahead all eight months of rehab in detail and with milestones. Four weeks: first time with full weight on my leg. Eight weeks: first time off crutches and start to learn to walk again—which was huge! Sixteen weeks: First climb—what a day! And so on.

Also the first weeks had been complicated. As I was not allowed to bend my upper body in order to avoid tension on the hamstrings, everything got complicated. For everything I had to figure out new beta. Try once to dress up when you can’t bend your upper body. Go to the toilet. Interesting and humbling time for sure!

You also injured your meniscus shortly after returning from the hamstring injury. Was it harder or easier the second time of rehab?

The first time was easier. The meniscus was a big set back because it caught me on the “wrong leg.” I was so keen to go climbing again after eight months. All the tests had been positive. I was strong. And then “boooooom.” But then, I did the same as before: set milestones, work for it. Even if that meant just doing nothing. That was hard.

After so many years, you reckon many people would begin to doubt their ability to succeed. What kept you motivated? What made you keep thinking “I can do this!”?

Again, it’s a strategy that helps in many situations in life. I did not go for the whole project straight from the beginning. If your goal is too big, it’s very hard to keep up the motivation. So first I tried to do the single parts, and then I started to link the parts together. One step after another. So I always could see progression.

But the longer this process lasted, the smaller progression got. But it still was there. Every year I did find some new micro-beta. Six years ago I fell for the first time on the last hard move and could not even climb a 6a afterwards because I was so exhausted. Last fall I had one day when I reached a personal best with making it up, and then falling down four times on the last hard move. Progression was still there.

Was there a point when you realized you had to change your tactic and try new beta or new training techniques? What was that point?

It was during the summer of 2015. After falling several times a day on the last hard move, I knew I had to get stronger. It was not a matter of endurance, it was a matter of power. 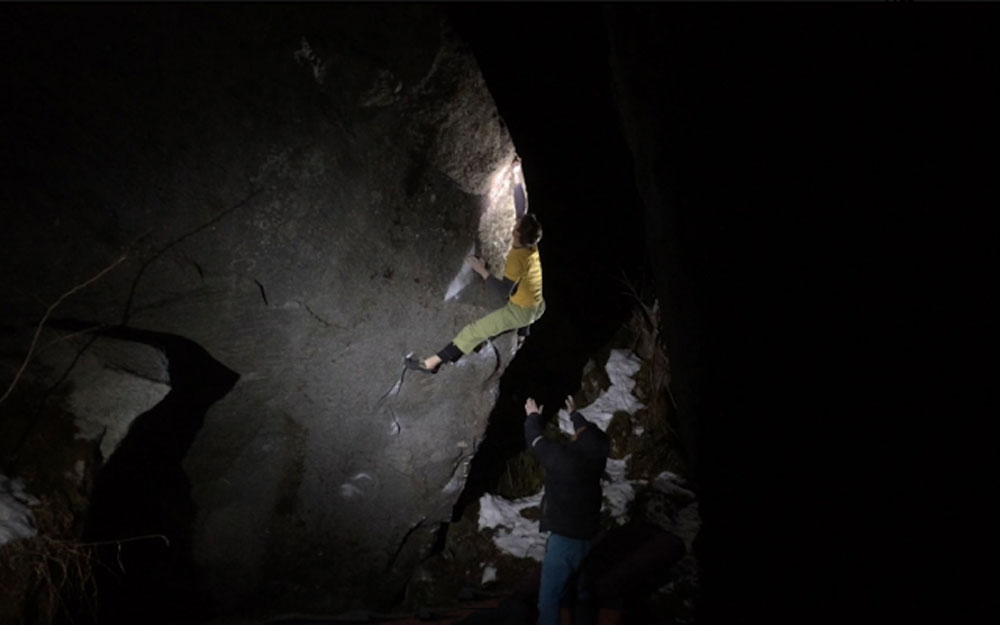 What did you change?

I never did really train before. I just went climbing and did some core exercises from time to time. Because the crux of the Highlander is on crimps, I knew I had to get stronger on crimps. So I started doing some hangboarding and campus training and soon I could see how my crimp-power improved, but my fingers could not cope with it. So I had to stop the training and could only climb twice a week. That was all my fingers could cope with. But I had seen the potential.

I did rest for a few weeks beginning of 2016 and restarted the training. The rest had been a great decision as the fingers were not perfect but they could cope better. I did also reduce my workload so I could sleep more for better recovery. Something you really need to pay attention to when getting older. You get strong while you sleep, not while you climb! And I did some 30-minute non-stop climbing sessions for active recovery and basic endurance. I also ran three times a week and reduced (but not quit) my daily chocolate intake.

How did you see yourself aging through this process? Did getting older matter?

Funny thing is I see myself not getting older thanks to this process. I’m stronger now than ever before and I’m way more focused. But I’m also a bit more relaxed and thanks to the injuries I am even more grateful for the days I can spend in beautiful nature.

What was the hardest part of Highlander overall? Training? The mental battle?

Interesting question. Struggling with conditions. Very often I had been physically ready but then it was too warm, too cold, too wet, too dry. Or then it was perfect conditions and I was not ready. Climbing at your very limit everything has to be lined up perfectly. So that was also part of my 2016 strategy. When you are stronger, not everything has to be perfect. This makes sending obviously way easier! 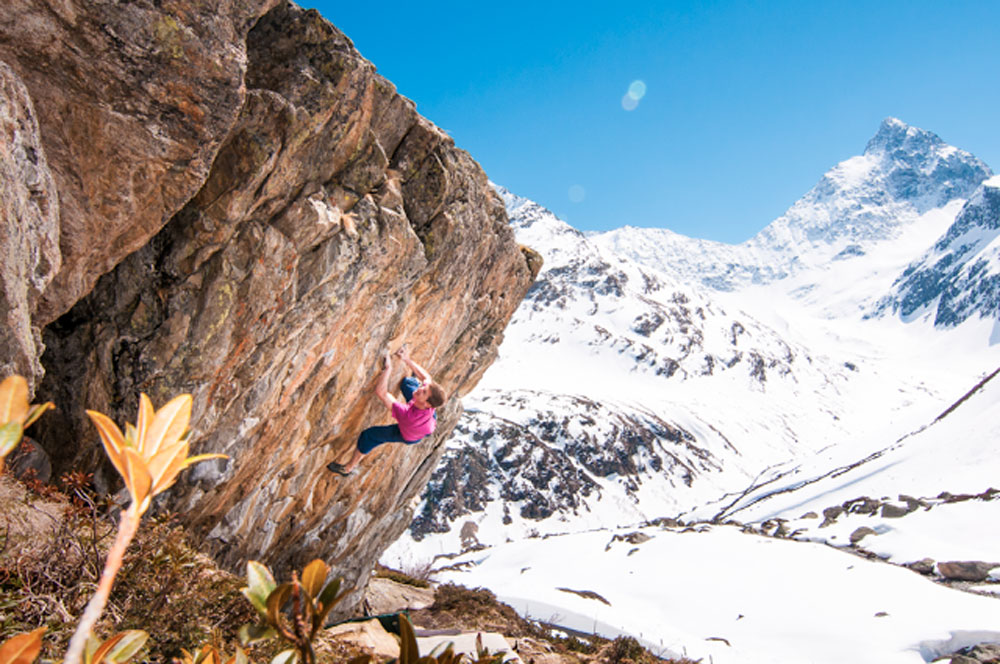 Did friends and family help or encourage you? If so, how?

Even though I finally climbed Highlander all by myself, it would not have been possible without the help and encouragement of all my friends and the people I met up there. Especially on the days when not everything went perfectly, it was great to have somebody who cheered you on to try once more, to try harder, or to just have a nice chat or laugh about that stupid idea to hike up to Sustenpass at 10 p.m. on the first of December, only to fall again on that last hard move.

What was the biggest thing you learned during this process and If you could give someone advice on their personal project, what would you say?

That if you really want something, and you are willing to put in the work it needs, that you can get it. And that in the end, the result does not matter that much anymore. But the process does. It doesn’t matter too much what you do, but more how you do it. Go for it!

So, what’s next for you?

All these years I joked that I would quit climbing once I finally sent Highlander and start playing chess. But now I still have some lines in my mind that I would like to climb. And it would be a shame to throw away the good form. So I am off scrambling on some rock—what else?

All photos courtesy of Angela Wagner and Martin Keller’s blog.