Jonathan Byers” />We worked it from both the top and bottom mostly on the weekends because Walker and Mike work during the week. There are a lot of hard pitches—six 5.13s and about twice as many 5.12s—so we tried to see as much of the wall as possible before going for it. On the hardest pitches, besides being straight hard and airy, the gear and sequences are really tricky. We worked the route in the daytime, and as the Valley heated with summer approaching, those hardest pitches became literally impossible in the sun. It required a lot of belief and imagination to think forward, and know we would not climb in the sun on the push and that it would feel much differently—it would be possible for us. It required all the tricks and strength we had. We learned a lot on the send too.

R&I: How many days did the send take? You mentioned a storm?

We spent six days and five nights on the wall, a night on top, and a day to rappel the route. There were a lot of cruxy moments. I felt a lot of pressure. We were waking at 3 a.m. to climb in the shade, and then watching the sun creep in on us, chasing us up the wall. The hardest pitches are fickle, especially the infamous stem corner. It messed with my head. Then yes, the storm. An un-forecasted seven-hour ordeal that began at 3:30 a.m. on the day we were to try the stem corner pitch [5.13c/d], the hard 5.13a pitch after, and two more pitches. It fucking rocked us, soaked everything, and left us huddled together next to our burning stove under a ghetto shanty white cotton bedsheet meant for shade. 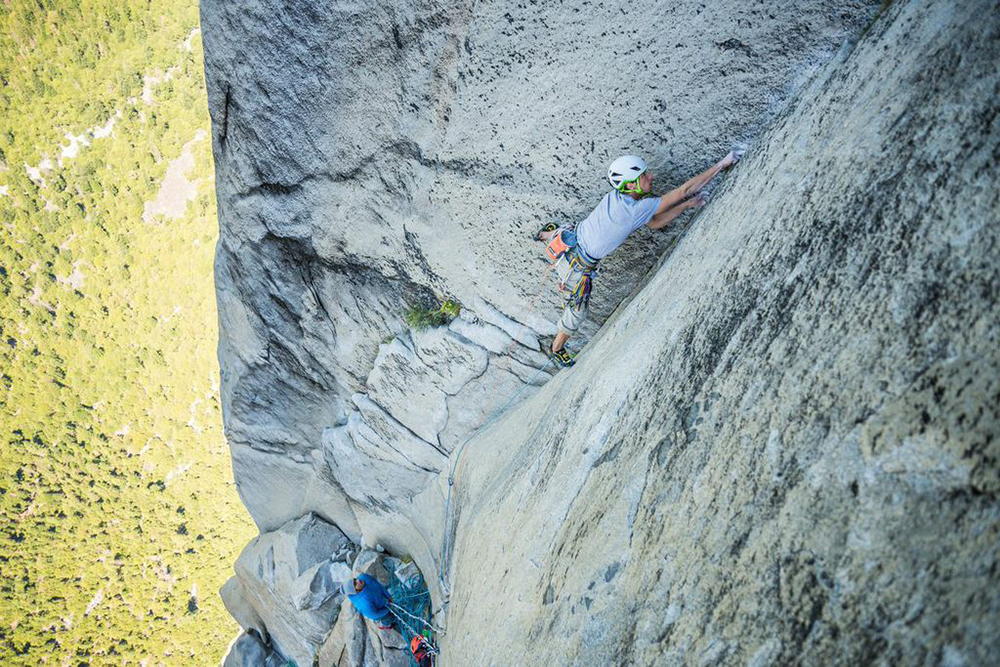 Jonathan Byers.” />Being on the ledge and not climbing, we were burning more fuel, eating more food, drinking more water than if we were climbing. Since we were running on a slim margin of error, we definitely thought the ascent was compromised, and we even had brief thoughts about if we would need to get rescued. But, by mid-afternoon the storm had cleared and the wind had picked up. It was cold and oddly dry and crisp. Our stuff dried, we ate a big warm meal, and went for it. It was Mike’s lead, and he set off. Three quarters of the way up the stem corner he placed his left foot poorly, and it slipped and he took a massive whipper on a tiny X4 offset cam. Bummed, he came straight to the belay, untied, pulled the rope, and went again. The first go was pretty and smooth, Muhammed Ali style, but now he was scrapping like a street fighter. His feet were slipping because his legs were tired from the first go. I don’t know why, but I had that scene from Batman in my head when Bruce Wayne climbs out of Bane’s hell-on-earth pit. The old, blind sage just keeps saying ,”Rise … Rise … Riiiise.” I kept saying that in my head, Rise Mike, Rise dude. Rise up and take this thing down.

He fired it. Then, so did I. It wasn’t romantic. It was a nerve-racking nightmare. It required all my physical strength, as well as my mental resolve. This pitch always haunted my thoughts, and I felt that if we could get through it, we’d have a really good chance. We easily dispatched the next 5.13a pitch, and when the day was over, we were psyched.

R&I: Your partner was Mike Kerzhner. How did you hook up with him?

Coincidentally, I have known Mike since 2005 in the Red River Gorge, but haven’t seen or climbed with him since. He was a kid in high school then. He and his younger brother Greg were such talents, and I was basically just starting my life as a climber. They were punks, but inspirational to climb with, and to talk to about climbing … They both still are to this day. I hadn’t even climbed 5.12+ when I first met them, and they were already crushing well into 5.13. He’s been in California for many years now, and he and Walker are good friends and climbing partners.

R&I: Do you feel like a more complete climber now that you’ve free climbed a major route on El Cap?

What I feel is a greater potential for the future, and broader world view and broader skill set. I’m just trying to follow my heart, and trying not to think too much. If tomorrow, I feel like I need to take up motocross, it’s not going to make me a more complete climber, but I must abide for the sake of my happiness and well being. That’s the how and the why I got into this climbing thing in the first place—the feeling that climbing was going to make my life better, that it was going to give me a purpose for a time. That ‘thing’ could be anything, but the key is to mind it when it arises.

Rest. Relaxation. Down time. I’ve done a lot this year, and there needs to be a balance point to that. Maybe motocross …