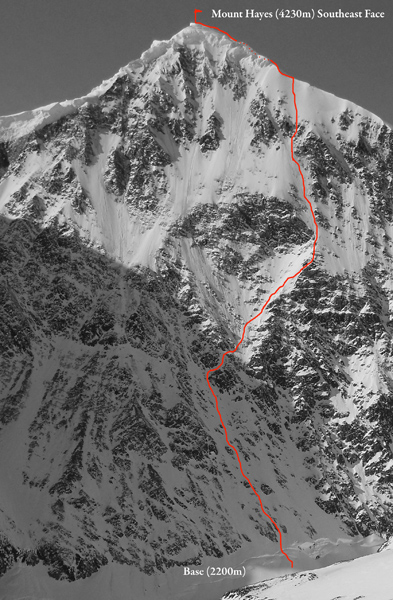 On April 15, Samuel Johnson completed a bold solo ascent of the east face of Mount Hayes (13,832 feet) in the Alaska Range.

Johnson is based in Anchorage, Alaska and has completed numerous first ascents in Alaska and throughout the world, including the Pillar Arete (V 5.10b) in the Arrigetch and the Direct West Face of Mount Hayes (V AI3R 6,500 feet) and the Northeast Buttress of Mount Balchen (V AI4 M6 3,500 feeet) in the Alaska Range.

Rock and Ice caught up with Johnson to get the full story on his impressive solo.

What inspired you to climb this route solo?

I’ve always wanted to solo a large face in a remote environment, but it wasn’t the plan. We [Ryan Johnson and I] experienced temperatures too cold for for our route on the East aspect, which received sun only in the morning. We shifted focus to the sunnier southeast face for a consolation objective as we felt the temps would be better. When we awoke in the morning, my partner Ryan Johnson was ill with a respiratory infection and was unable to eat. After a short discussion I opened the possibility of myself soloing the face and Ryan supported me in doing so.

What gear did you take?

The climbing was primarily sustained 45-65-degree ice and snow, with short rock steps, and occasional steeper segments up to about 75-80 degrees (AI3 M3). There weren’t really defined cruxes, just a huge route [over 2000m (6,562 feet] of elevation gain, probably almost 2700m [8,858-feet] of actual climbing) with lots of exposure and relatively secure climbing. I paralleled the route of the first ascent on the face to about the 2/3 mark. Where that route traversed right to escape the face, I went straight up to hit the summit ridge for a new variation to the 1988 route completed by Tom Walter and John Bauman in four days roundtrip. My roundtrip time from basecamp was 18 hours. I spent about 9 hours on route from the bergschrund between 10:30 a.m. and 7:30 p.m. with four hydration/food/cold injury prevention stops. 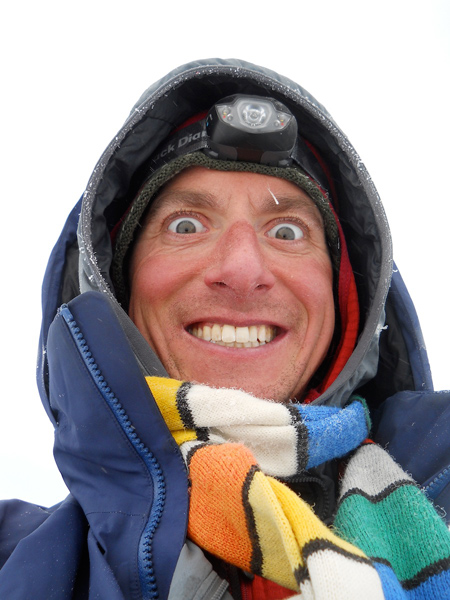 How were route conditions? Were you concerned about objective hazards like avy danger?

Route conditions were good. The snow was for the most part firm. Climbing so much relatively steep alpine ice, free solo, was mentally taxing as well as tiring on the calves. When I could, I would link together segments of neve [snow that has melted and refrozen] to eliminate some of the strain. My primary concern was a worry I would bump into pockets of hard slab on the upper mountain and would accidentally be spit off route in a matter of seconds for a 2000m (6,562 feet) ride.

How was the descent?

The descent was nerve wracking. The east ridge of Hayes is a 7000-foot route that I hadn’t climbed before, and is notoriously crevassed. I was all eyes and ears as I focused to navigate around crevasses, cornices, and occasional dense alpine-ice downclimbs. The descent down the last part of the east ridge below Levi’s bump was unpleasant as the upper portion was a couple inches of incredibly dense, thin alpine-ice over gravel, making v-threading impossible. After downclimbing a while I found good ice, and finally neve. Seeing Ryan’s headlamp pop over the edge of a rise on the glacier was a breath of fresh air. I guess it was around that point that I realized I had had a really kick ass day out in good style and that I was going to get to rest and be safe for a while.

Check out this video below of Johnson and his partner Ryan Hokanson climbing in the Mount Hayes area: