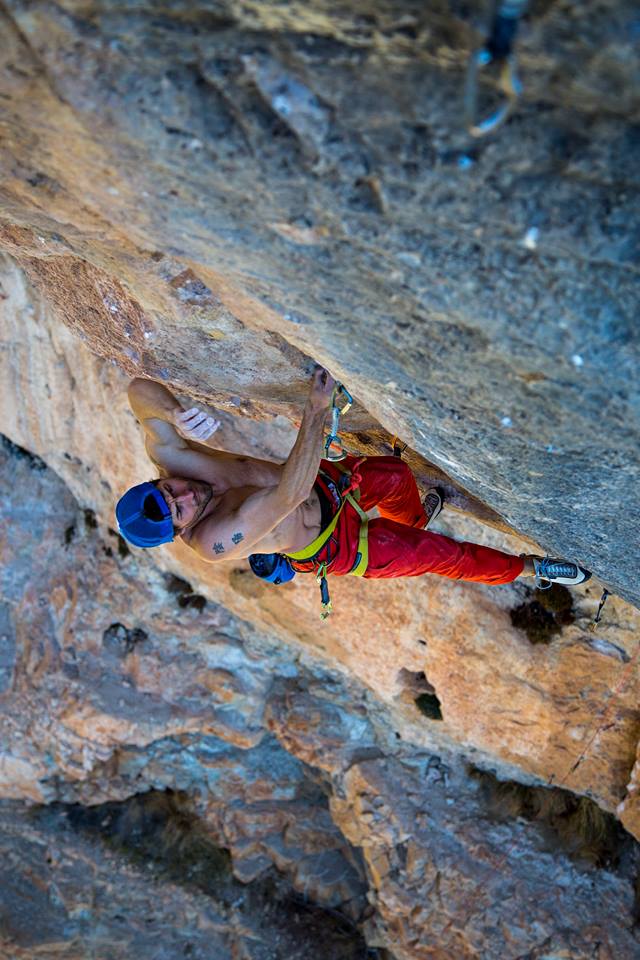 Rock and Ice caught up with Trotter to learn more about the climb and his six-week trip in Spain:

RI: How long are you climbing in Spain for?

ST: The whole trip was six weeks and now we only have one left. It was definitely not long enough.

RI: Can you tell us a little bit about Estado Critico, your inspiration to climb it and what the projecting process was like?

ST: The route took me six days of work, maybe seven. The first day I remember touching all the holds and being pretty discouraged, they didn’t seem good enough for me to actually use them all. But then we started trying it from the ground a couple of days later and I got more and more stoked on it.

I chose Estado for three reasons: One, I wanted to know what the first 5.14d on-sight would feel like, ha ha. Two, because I’m here with my family and so it was the closest hard route to the parking lot, as well as the town of Cornudella where we are staying. And Three, because it’s an absolutely stunning line, long and steep and beautiful. I was very much inspired by it.

RI: How difficult was this climb for you? Did you ever doubt that you would be able to send?

ST: Ya, for sure. I had more doubt than certainty. I mean, I knew I could do it, I just didn’t realize I would do it before we had to leave. I was fully prepared to not send. I figured my chances of success were pretty low, but I was just having so much fun on the climb that I didn’t really care that much. I was just as happy to keep trying it and fail then I was to send it, so it all came to me as a HUGE surprise when I stuck the crux for the first time from the ground.

RI: Was Estado Critico your main goal or the trip, or did you have other routes in mind as well?

ST: Well actually I hurt a pulley in my finger two weeks before coming here so we went straight to Terradets to climb on some gently overhanging, tendon friendly tufa’s. I taped my finger a lot and we shook off the jet lag on long pumpy 5.13’s for a week, it was fantastic.

I was really hoping to try this route before I left Canada, but then when I hurt my finger I thought I wouldn’t have a chance. I didn’t climb for two weeks before we left for the airport so I was just along for the ride really and feeling kinda bummed out. But after I started climbing some harder routes and getting my fitness back, after two weeks here my finger felt great and I stopped wearing tape. I also tried the classic dream climb Era Vella (5.14d) and it felt incredible. I’m confident I can do that route as well, but in the end I chose Estado because Margalef is a 45-minute drive from where we are staying and when you have a baby, you don’t want to spend too much time in the car.

RI: How many times have you climbed in Spain? What do you think of the climbing scene there?

ST: I was here for the first and only other time in 2001 with Tommy Caldwell, Nick Sagar and Eric Cutler. We were all just kids. It was the trip of a lifetime though. Things have certainly changed a lot in the last 14 years, here in Spain, and in our own lives as well. We all have kids now, ha ha, and there are more hard routes in Spain and more new climbing area’s then we ever could have imagined. The scene over here is vibrant and healthy and strong, and colorful and exciting. We really want to come back again, it’s the best sport climbing I’ve ever done.

RI: What’s next for you? Any other trips planned/climbs in mind?

ST: Ha ha, well from here I’m going to Yosemite to do some steep slab climbing with Alex Honnold, then I’m hoping to spend the summer in my homeland of Canada. I have some big mountain projects I want to dispatch, and I’m really, really excited about them.